The Domestic Side of International Relations: Is the United States an “Indispensable Nation?” 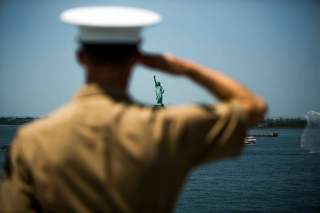 The Center for the National Interest partnered with the Charles Koch Institute to host a foreign policy roundtable. Among the topics addressed was: Madeleine Albright famously remarked that ‘we are the indispensable nation, we stand tall and we see further than other countries into the future.’ This is a common view in the foreign policy establishment and is used to justify an active American role in the world. But is it true?

“If we can see further, how come we didn’t predict all the problems that we were going to have in Iraq after our invasion? That doesn’t seem like we’re seeing much further than beyond our nose.” —William Ruger, Charles Koch Institute.

The United States is an exceptional nation. Its history is unique, and its prosperity and military power are the envy of the world. But does the United States’ exceptionalism mean that it can “see further than other countries”? Has this presumption guaranteed foreign policy success or assured that U.S. actions abroad improve the world? This extraordinary belief in American exceptionalism is critical to understanding America’s role in international politics.

For his part, Eugene Gholz of The University of Texas at Austin does not believe the United States can see further into the future than other countries. Policymakers in Washington regularly fail to predict developments within the Beltway—let alone fathom how extraordinarily complex events will play out thousands of miles from American soil. “The idea that we see further into the future of what’s going to happen to other countries, and can shape it in a meaningful way … it defies belief,” Gholz argues.

“Every great power thinks they’re special,” adds Stephen Walt, of Harvard’s Kennedy School of Government. And furthermore, “most of them think they have some kind of universal mission.” Walt notes that the British believed in spreading their culture and the French had their “mission civilisatrice.” But neither had a “magic formula that works everywhere,” and recent events show that the United States’ formula does not work everywhere either.

It is unsurprising that the conception of the United States as the “indispensable nation” sprung up during the aftermath of the Cold War. The United States had vanquished Soviet communism, emerging stronger and more united for its efforts.

Today, however, the idea persists even as American foreign policy has stumbled. According to John Mearsheimer of the University of Chicago, many of today’s hawks do “not have a healthy appreciation of the limits of military force.” American political and economic norms may spread across the globe—and indeed the scholars hope this will be the case—but Gholz reminds us it would be a mistake to think “we can drive that trajectory.”

Instead, U.S. efforts to spread democracy and liberalism have resulted in a series of messy Middle Eastern conflicts that have cost American blood and treasure. To get the country back on track, policymakers will need to be courageous and not fall victim to what Columbia University’s Richard K. Betts refers to as the “powerful human instinct against simply … putting up your hands and leaving.” Perhaps Barry Posen, of the Massachusetts Institute of Technology, is right in saying that “we need a new strategy to manage the mess.”

Watch the video above to see these top international relations scholars discuss the role of American exceptionalism in shaping U.S. foreign policy—and watch the full series to see how they consider other questions regarding domestic considerations in foreign policy.