The End of the Beginning of Hillary Clinton's Email Problem 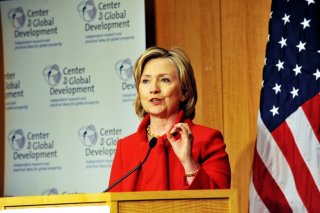 The personal email accounts and private servers are no longer a legal issue. No classified material was, in the view of the Federal Bureau of Investigation, deliberately exposed on former Secretary of State Hillary Clinton’s private email, and no criminal charges will be filed by the Justice Department for mishandling classified information. It may seem like it’s now smooth sailing for Clinton’s presidential campaign, a political machine of monstrous proportions that is staring at an opponent in Donald Trump who can’t even bring together the party he represents.

Those are the conclusions that Clinton and her staff hope will become a reality now that FBI Director James Comey has concluded that it would be a losing proposition for the Justice Department to bring criminal charges against Clinton over her email practices. While Secretary Clinton may have broken protocol and her department’s own rules by using a private server as her only mode of electronic communication, Comey and his team of investigators have made the judgment that the Clinton team was not negligent to the point of engaging in a criminal act. “In looking back at our investigations into mishandling or removal of classified information,” Comey told reporters, “we cannot find a case that would support bringing criminal charges on these facts.”

The lengthy nature of the FBI’s investigation and the amount of manpower and resources the bureau poured into it demonstrates just how politically toxic the email issue has become for Hillary Clinton. The issue had been a heavy ball-and-chain attached to her ankle even before she declared her candidacy last spring. Republicans, always eager to bruise one of the preeminent power brokers in the Democratic Party, hoped that the act of sending classified information across unclassified servers would kill Hillary’s campaign before it even started. And if it didn’t kill her campaign, perhaps it would weaken it enough that a rising insurgent in the Democratic Party could overtake her the primaries. Thanks in part to an opponent in Bernie Sanders who refused to touch the issue and a congressional Republican caucus who shot themselves in the foot by holding Hillary Clinton captive in the Select Committee on Benghazi’s hearing room for eleven straight hours, Clinton emerged as the Democratic nominee for president with the help of her large war chest, star power with the Democratic donor community and establishment, and ability to win in demographics that Bernie Sanders couldn’t (particularly among African Americans and Latinos).

Many people seriously following the case never truly believed that a criminal indictment from the Justice Department was going to happen. The evidence was never clear cut; despite the existence of a private server in her home, tens of thousands of emails bouncing back and forth from her private account to her colleagues in the State Department, and frustration among some of her top aides about the arrangement being less than efficient, the FBI never had the smoking gun they were looking for. They could never prove that Hillary Clinton’s email arrangement was a scheme to avoid public-records laws, nor could they conclusively determine beyond a reasonable doubt that Clinton knowingly sent classified material through an unclassified portal.

In a way, however, the absence of an indictment is not the entire story. Director Comey’s harsh commentary on the behavior of Clinton and her team—“there is evidence that they were extremely careless in their handling of very sensitive, highly classified information,” Comey said—will provide Trump and the Republican National Committee plenty of ammunition. Just because she will not be charged with a felony doesn’t mean that Republicans will drop the entire affair and put it to bed. Instead, they will pick and choose Director Comey’s speech to fit their narrative of Secretary Clinton breaking the rules of her own department, operating as if she were above policy and procedure, and acting as if setting up a private server in your basement outside of official government channels is an ordinary part of doing business. Donald Trump has already complained about the FBI’s conclusion, but those complaints will quickly turn into sour grapes if he continues to harp on Comey’s investigatory judgment—a losing battle given his respect across both political parties and his former life as a prosecutor and a Deputy Attorney General. The rest of the Republican leadership and members of Trump’s own campaign will take a more nimble approach by attempting to tie Comey’s wrap of Hillary Clinton into a broader theme of the former Secretary making some terrible decisions.

You can bet that the email saga will remain a talking point well into the summer and fall, indictment or no indictment.