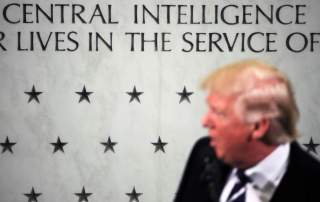 An especially insidious snare for a liberal democracy in the conduct of its foreign policy is the temptation to adopt the strategies and tactics of one’s adversaries. President Donald Trump’s appointment of Gina Haspel as the new director of the Central Intelligence Agency highlights that problem. A longtime CIA veteran, Haspel ran one of the Agency’s infamous “black sites” (in Thailand) during George W. Bush’s administration. Those sites specialized in conducting “enhanced interrogation” (torture) of Al Qaeda suspects. Such techniques included subjecting prisoners to sleep deprivation lasting for days, hanging them in stress positions for hours at a time, and most controversial of all, waterboarding—repeated simulated drowning—of suspects. Haspel apparently not only presided over such misdeeds; there is evidence that she played a leading role in covering them up.

Officials established black sites outside the United States to avoid running afoul of constitutional and statutory prohibitions against torture and the pervasive deprivations of due process. The government sent prisoners to Guantanamo for the same cynical reason. But the black sites and Guantanamo were not the only examples of how U.S. leaders avoided those strictures. So too was the practice of rendition, whereby the United States sent accused terrorists to “friendly dictatorships” renowned for using torture techniques that made even American conduct look mild. Those governments included Hosni Mubarak’s dictatorship in Egypt, and in an example of supreme irony given Washington’s current policy, Bashar al-Assad’s regime in Syria.

The United States trashed fundamental American values—and basic standards of human rights—in waging the war on terror. Because the country faced a ruthless and brutal adversary, U.S. leaders apparently concluded that it was appropriate, indeed necessary, to adopt merciless and unethical tactics to defeat that adversary.

The war on terror is not the first time that the U.S. government succumbed to obliterating the nation’s professed moral principles. Even the wars against Native American tribes during the eighteenth and nineteenth centuries exhibited a similar tendency. Civilian leaders, military commanders and white civilians alike routinely cited atrocities that Native American fighters committed as a justification for using equally vicious measures.

During World War II, U.S. and Allied leaders approved blatant war crimes in the campaign against the Axis powers because those regimes were so irredeemably evil. That perception was true, but in the name of combatting that evil, the Allies committed atrocities of their own against innocent people. The massive civilian casualties inflicted during the bombing attacks on such cities as Dresden and Tokyo are ample testimony to the callousness that became the new norm. The atomic bombings of Hiroshima and Nagasaki, sites that had little military importance, put an exclamation point on the moral corrosion. Franklin Roosevelt’s administration even emulated its Axis enemies is establishing concentration camps (albeit milder versions) to incarcerate Japanese-Americans.

The outbreak of the Cold War against the Soviet Union prompted the United States to adopt not only morally ambiguous, but sometimes utterly sleazy, foreign policy tactics. Even as Washington justly condemned the Soviets for their interference in the internal affairs of other countries, the newly created CIA and other agencies routinely engaged in similar behavior. U.S. administrations were not above meddling in the domestic politics even of fellow liberal democracies, including France and Italy.

Even worse were those cases in which Washington subverted and overthrew democratic governments to help install “friendly dictators.” There is now indisputable evidence that the United States was involved in such disreputable moves against elected governments in Iran, Guatemala, Chile and other countries. Indeed, U.S. leaders seemed to prefer pliable autocrats to unpredictable democratic leaders. When General Chun Doo-hwan overthrew an embryonic democratic government in South Korea, John Wickham, the commander of U.S. forces in that country, excused the seizure of power saying that South Koreans were “lemming-like” and needed a strong leader.

Morally corrosive practices tend to persist even after the original justification has expired. Washington’s encouragement of demonstrators to unseat Ukraine’s elected, pro-Russian government in 2014 suggests that the habit of U.S. meddling in the internal politics of foreign countries is alive and well.

Such behavior is mild though compared to the adoption of torture and other foul practices. Indeed, in the name of waging the Cold War, U.S. officials flirted with even more horrific options. During the Kennedy administration, the CIA concocted a scheme to stage a series of false flag attacks, including blowing up civilian airliners, which would be blamed on Fidel Castro’s regime. Washington could then cite those terror attacks as a justification to invade Cuba and oust Castro. Fortunately, the White House rejected that scheme, but that supposedly responsible officials could even propose murdering hundreds of innocent Americans as a geopolitical pretext illustrated just how much U.S. policymakers were emulating their immoral communist counterparts.

A disturbing callousness still governs U.S. foreign policy. Washington’s drone strikes against targets in Afghanistan, Pakistan, Somalia and other countries frequently kill innocent civilians in addition to terrorists. The indifference to “collateral damage” is reminiscent of the Soviet/Russian conduct during the wars that Moscow waged in such places as Afghanistan and Chechnya. So too is the willingness of both the Obama and Trump administrations to make the United States an active accomplice in Saudi Arabia’s atrocity-filled war in Yemen.

The German philosopher Friedrich Nietzsche expressed the cautionary admonition: “Beware that, when fighting monsters, you yourself do not become a monster.” Too often, we have ignored that warning. Gina Haspel’s defenders assert that her behavior conformed to procedures that senior CIA officials (and presumably the Bush White House) had approved. The international community rejected the “just following orders” defense that defendants invoked at the Nuremberg trials. Haspel’s defense is no more valid or persuasive. We should not accept a female version of the Marquis de Sade to lead the CIA. A refusal to do so would be a modest, but important, first step in reclaiming America’s soul.