The Saudis in Yemen: Between Incompetence and Criminality 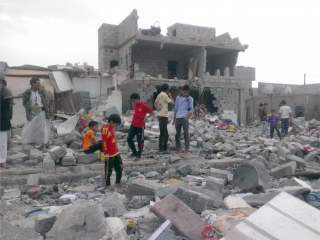 Having the privilege of serving your country as an ambassador can be an honor of a lifetime. You get to attend fancy dinner parties with foreign leaders, travel the world on the taxpayers’ dime and hone your diplomatic skills for a higher office.

But ambassadors also have the tricky duty of explaining to foreign audiences and governments why their country has decided to use military force. Ambassadors are often the first individuals on the chopping block when something goes wrong or when diplomatic relations between states start to suffer. (Dan Shapiro is the first person that comes to mind. The U.S. ambassador to Israel has had to extinguish numerous fires between the Obama administration and the Netanyahu government.)

So when Prince Abdullah al-Saud, the Saudi Ambassador to Washington, penned an op-ed in the Wall Street Journal attempting to explain why the Royal Saudi Air Force has been bombing Yemen for the past twelve months, one could sympathize with his position.

The Saudis launched their air campaign in March 2015 on behalf of the internationally recognized Yemeni government, which was expelled from the country by Houthi militia forces. The intervention has since devolved into an increasingly unpopular affair in Western Europe and among the human rights community in the United States. The thousands of civilian casualties and the utter devastation of Yemen’s already lackluster public infrastructure has gotten so cataclysmic that the European parliament decided to approve a resolution requesting an EU-wide arms embargo against Riyadh “given the serious allegations of breaches of international humanitarian law . . .” While the resolution has no binding effect on its member states, it sent a shockwave to Saudi officials who were lobbying European capitals to drop the measure.

As Saudi Arabia’s ambassador to the most powerful country on the planet, it is Prince Abdullah’s job to try to mitigate the damage that resulted from that resolution. The nightmare scenario for Saudi officials would see the Obama administration adopting the EU’s view of the conflict—a perception that would result in a change of policy and a stand-down order to U.S. Air Force pilots who are currently filling up Saudi aircraft with jet fuel in midair.

If the aim of Ambassador Abdullah’s WSJ piece was to convince Americans that Saudi Arabia has been engaging in a flawless military operation at the request of the legitimate Yemeni government, he more than likely failed. His op-ed recycles the well-worn talking points that officials in Riyadh have used ever since the Houthis stormed into Sana: the Houthis are a bloodthirsty, Shia militia working at the behest of Iran, who is aiming to subject twenty-six million Yemenis to their dominion. In Prince Abdullah’s accounting, Saudi Arabia was simply acting in self-defense in order to preserve the integrity of a neighbor whose capital was quickly being transformed into Iran’s fourth Arab outpost (after Damascus, Beirut and Baghdad). “No country would accept a similar situation on its border,” Abdullah writes. “It is not only destabilizing for Saudi Arabia, but for the global community . . .”

The problem with Abdullah’s argument is not that he’s describing the conflict as he wishes it to be (an Iranian-orchestrated coup) instead of what it really is (a civil war). The Houthis, after all, have reportedly received Iranian weapons shipments and possess an arsenal of ballistic missiles capable of flying into Saudi Arabia. At least eighty Saudis have died in these missile attacks, which Riyadh is more than justified in responding to.

What is missing from Abdullah’s comments is any mention at all of the thousands upon thousands of Yemeni civilians—a large portion of whom are women and children who are merely trying to survive the civil war around them—that have been killed in Saudi air raids. The claim from Abdullah that “Saudi Arabia has been working with its allies to take all precautions to protect civilians, medical staff, humanitarian organizations and journalists in Yemen,” is laughable on its face given the extensive documentation from a variety of independent and credible sources that the rules of proportionality and distinction are being willfully violated. We are not only talking about reports from Human Rights Watch on the use of cluster munitions in populated areas or “a series of unlawful air strikes on schools” as reported by Amnesty International, but documentation from the UN’s own Panel of Experts, which reported that at least 119 sorties are in the category of breaching international humanitarian and human rights law.

In addition, while Abdullah is correct in stating that Saudi Arabia has now established an independent commission tasked with reviewing procedures and rules of engagement, there is no credible reporting that this review has accomplished anything. Establishing a commission is one thing, but allowing that commission to work independent of the military coalition and disclosing any reviews to the public are entirely different.

Legally speaking, Saudi Arabia’s military intervention in Yemen is perfectly within bounds. Yemeni President Abdu Rabbu Mansour Hadi openly requested Riyadh’s military assistance, so it’s not as if Riyadh is acting preemptively or waging a war of aggression on another country’s soil without the express permission of that government. The way that Saudi Arabia has prosecuted its intervention, however, lies somewhere between incompetence and criminality.

If the Obama administration were smart, Secretary of State John Kerry would order the U.S. ambassador to Saudi Arabia, Joseph Westphal, to contact Prince Abdullah and tell him that his explanations in the WSJ are simply not good enough. Or, better yet, President Obama can get on the phone himself and have a heart-to-heart with King Salman or Foreign Minister Adel al-Jubeir: either reign in your bombing of schools, hospitals, medical clinics, residential homes, businesses, marketplaces, factories, ports and weddings or jeopardize U.S. military support for this conflict.

Sometimes being a good friend means telling your friend what he doesn’t want to hear. The United States is not doing its Saudi ally any favors by enabling an intervention that has produced nothing but despair for Yemeni families, hunger for millions of children and piles of rubble where beautiful buildings used to stand.