The Truth About Women in Ground Combat Roles 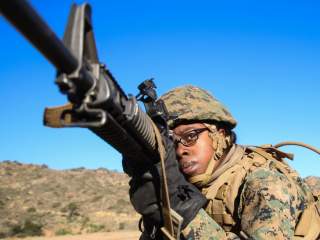 Women have long been an integral part of the U.S. military, having performed admirably—in some cases, heroically—in Operations Iraqi Freedom and Enduring Freedom. Over the past month and a half a succession of some of the nation’s most powerful civilian and military leaders have lauded the recent decision to remove all restrictions on what jobs women can fill in the U.S. Armed Forces. Lifting the ban, they say, will make the military stronger. They are wrong.

The very best outcome we can hope for is that the Armed Forces’ abilities will remain static. The most likely outcome, however, is that there will be some degradation in the units that are charged with some of the most critical roles: closing with and destroying enemy forces. Lifting the restrictions was, no doubt, designed to elevate the stature of women and give them an opportunity in the military equal with men. The result of the move, unfortunately, is likely to be that we’ll place women at a disadvantage and put them in a danger greater than that faced by men in combat.

President Obama commended the December 3 decision by Secretary of Defense Ash Carter to open all combat jobs to women. He said that, as commander in chief, he knows “this change, like others before it, will again make our military even stronger.” Echoing that sentiment, Secretary of the Navy Ray Mabus argued that lifting the ban is “not going to make [the U.S. military] any less fighting effective. In fact I think they will be a stronger force, because a more diverse force is a stronger force.” Evidence, logic and experience says these hopes will not be realized.

Approximately 90 percent of all military occupations have already been open to women for quite some time. The 10 percent of the jobs that have been restricted to men-only were the frontline, direct combat roles requiring significant physical strength such as infantry, artillery and armor. In determining if this restriction has unfairly prevented women from filling those roles, it is instructive to examine comparisons to other male-only organizations.

There are currently no women in the National Basketball Association, the National Football League, Major League Baseball, the National Hockey League or other professional sports leagues. The reason for their absence has nothing to do with discrimination but is flatly rooted in the fact women biologically are not able to perform physically to the same level as men.

What must always be the overriding—if not exclusive—criteria for making any change in the U.S. military is that it make the Armed Forces more effective. Having women serve in 90 percent of military jobs they currently do makes sense. Women can and have made significant military contributions in all the positions where they’ve served. But there are some very specific combat related factors that would likely diminish the effectiveness of tactical fighting units if women were included.

I fought in Desert Storm with an armored cavalry squadron. For literally months I lived in the tiny space on the inside of my armored personnel carrier with two other men. There was no privacy, no cloistered sleeping spaces and no restrooms. For three men this is a hardship but doesn’t present any operational problems. If one of those crewmen had been a woman—or if the crew had been two women and one man—there would have been problems.

No matter what anyone may desire to be true, it would be inviting disaster to put mixed men and women in such intimate settings and expect there to be no friction. The vast majority of armored crewmen, infantrymen, and artillerymen are roughly between the ages of eighteen and twenty-five.  According to numerous studies, that age range lines up almost exactly with the height of male sexual desire.

Confining men and women of that age in combat or training environments and expect there to be no sexual interaction is naïve. Some will engage in consensual sex, some number of other men will force themselves on women via sexual assaults or outright rape.  Even when no sexual acts take place, there will certainly be considerable sexual tension among that crew.

Following Desert Storm I served in a field artillery unit, where gunners and crewmembers had to carry 103lb 155mm shells for the howitzers. In 2011, while serving in Afghanistan I observed infantrymen on patrol who had to carry up to 100lbs of body armor and equipment. There would likely be few women who would be able to perform those tasks. These are not inconsequential matters.

If the only enemy the United States ever faced was an insurgent group with no tanks, no artillery battalions, no attack helicopters, no jets and no formal logistics systems, then the U.S. military will never face an existential fight and will thus never risk being driven from the field. In such an environment, you can do almost anything to a combat unit and it’ll successfully accomplish its mission. Let the enemy be Russia, China or a few other armed forces and the situation changes dramatically.

There is no issue with a women’s intellectual quality or value as a human being. It can be argued that in some cases women are smarter and more clever than men! In areas of the military not requiring physical strength or stamina, a woman ought to be able to compete on an equal footing with a man. But we ignore biology at our own peril. In the name of advancing women’s rights we cannot risk diminishing the capabilities of ground combat units.