The Wrong Way to Fix a Bloated National Security Council 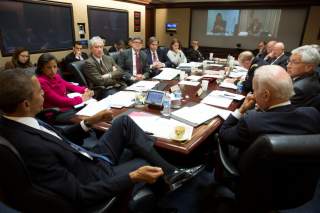 For the reporters and correspondents who cover defense policy on Capitol Hill, the House Armed Services Committee markup of the National Defense Authorization Act is a dreaded all-day affair. The massive NDAA is the kind of bill where lawmakers try to attach some their pet projects to the legislation. Hundreds upon hundreds of amendments are offered and debated individually, with discussions oftentimes stretching beyond the allotted several minutes that are assigned for each item.

This year's NDAA markup was no different. You could see the strain in the faces of those lawmakers working on the bill; indeed, by the time the markup reached hour fourteen, some of the lawmakers looked as if they were falling asleep in their big, black leather chairs.

The final product that emerged from the committee was a 756-page monstrosity of a bill that authorizes seemingly every defense program under the sun. From prohibiting the closing of Guantanamo, to blocking another round of base closures to dipping into the Overseas Contingency Operations account to pay for more F-35 aircraft, Defense Secretary Ash Carter and White House officials hope that Senate Democrats will help water down some of the language later in the process.

There are a lot of provisions in the bill that the administration objects too, but by far the most controversial is HASC Chairman Mac Thornberry’s amendment which would limit the size of the White House National Security Council—the interagency body housed in the West Wing that is responsible for providing recommendations to the President.

According to the text of the amendment, “If the staff of the Council exceeds 100 covered employees at any point during a term of the President…the Assistant to the President for National Security Affairs shall be appointed by the President, by and with the advice and consent of the Senate.”  In short: if passed by Congress, the President’s closest confidant on national security affairs will now be subjected to methodical hearings and a full Senate floor debate.

Thornberry's attempt at reform is noble and badly needed. The NSC has ballooned into another department within the U.S. national security bureaucracy from a core staff of several dozen to one that boasts nearly 400 people on its payroll. Three of President Obama's former Secretaries of Defense have complained about the size of the NSC staff and the degree to which the White House is micromanaging the implementation of national security policy—a job that should be left up to the departments and agencies outside of the West Wing. Cutting down the size of the NSC staff, the thinking goes, will help solve that problem by forcing the council to revert to its original function: "advise and assist the President on national security and foreign policies”.

Chairman Thornberry deserves credit for forcing the issue. As the expression goes, talk is cheap. A problem doesn't get solved merely by talking about it an endless cycle, but by doing something about it through concrete action. Washington D.C. has enough talk; what Americans are looking for is action from the people that they elect. Thornberry is trying to do precisely that.

Where Thornberry and his Republican colleagues in the House go wrong, however, is requiring the President's National Security Adviser to be subject to Senate confirmation. While putting more power in the hands of the legislative branch would be a boon to the system of checks-and-balances, requiring the national security adviser to undergo weeks, if not months, of hearings is a recipe for yet more partisan acrimony.

If there is any position in the federal government outside of the Secretary of Defense or the Secretary of State that is critically important to the U.S. national security bureaucracy, it is the national security adviser. The man or woman who sits in that seat is responsible for a dizzying array of tasks that would make even the most experienced national security veteran feel overwhelmed. The National Security Advisor is not only expected to keep the trains running on time, so to speak, but to provide the President with the best possible advice. He or she needs to be a crisis manager when an international emergency occurs (which could occur anywhere, at anytime) and ensure that the President receives every single option that could resolve the crisis before it snowballs into something much bigger. And, of course, the National Security Advisor is a guardian to the Oval Office—a protector of the President from theturf battles and personality clashes that can slow down or even ruin the decisionmaking process.

As the House debates Thornberry's amendment, they should ask themselves a simple, but highly pertinent question: is U.S. national security best served by putting one of the most instrumental positions in the national security bureaucracy through a laborious, time-consuming, and hyper-partisan confirmation process that could potentially drag out for months?

This isn't a theoretical or academic question, but one of reality. Just ask Adam Szubin, the man tapped by President Barack Obama to be the Treasury Department's Undersecretary of Financial Intelligence, who was first appointed in April 2015 and who was only cleared by the Senate Banking Committee last March. Or you could ask Merrick Garland, the Chief Judge of the D.C. Circuit Court of Appeals, who was nominated to be an Associate Justice to the Supreme Court and has yet to be shown the decency of a confirmation hearing in front of the Senate Judiciary Committee. What about Roberta Jacobson, who had to withstand about ten months of objections from Senator Marco Rubio before finally being confirmed as U.S. Ambassador to Mexico on April 28th?  Even the position of Army Secretary hasn't been spared by the gridlock: just last month, Sen. Pat Roberts placed a hold on Eric Fanning's confirmation over concerns about the Obama administration's plan to close down Guantanamo.

It is difficult to believe that the U.S. Senate would be any more helpful if the National Security Advisor was placed in the chamber's good graces. In fact, it's likely that any future president would have to make due with an acting national security adviser long before the Senate even comes around to scheduling hearings. Some Republican senators will inevitably use the prospect of another confirmation process as more leverage to bludgeon the White House over specific policies or as simply as a tool to punish the President from being a member of the opposite party (and to be fair, Democratic senators would likely to do the same thing in the event that Donald Trump wins the White House this November). Why would we want to deprive any Commander-in-Chief, Republican or Democrat, from picking an individual that he or she trusts to keep the national security bureaucracy on the same page?

Thornberry is right to raise concerns about the NSC's bloated membership, and he is perfectly within his rights as a lawmaker and as a chairman to try to fix the issue through legislation. But if Thornberry truly wants to succeed in his reform efforts, he should forget about giving the Senate more confirmation power—power that is liable to be abused by Republicans and Democrats alike.