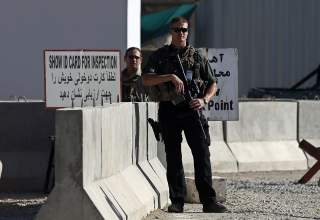 What does a country do when its military has been fighting a conflict half-way around the world for over a decade and a half, supporting a host government so corrupted internally, disorganized politically, and at a very real risk of collapsing completely without continuous international military and financial support? The United States is in exactly that predicament with respect to its never ending mission in Afghanistan, a nation whose political leadership never misses an opportunity to quarrel with each other and make a mistake.

One can say a lot of things about how Donald Trump has conducted himself as president of the United States. His management of the Oval Office is less to be desired. His propensity to use escalatory rhetoric, like his infamous “fire and fury” comment directed at North Korea, oftentimes make a fragile situation worse.

But what you can't do is blame Trump for demanding additional options from his national security team for what to do in Afghanistan—even if one of those options involves outsourcing the war effort to former Blackwater CEO Erik Prince and his private army of ex special forces soldiers.

If salvaging the war in Afghanistan was easy, the policy debate would be have been over by now. U.S. Commander John Nicholson and National Security Adviser H. R. McMaster would get their 4,000–5,000 additional troops, a more expansive list of targets, looser rules of engagement, and an unconditional amount of time to turn the country's security situation around. The United States, in effect, would be relying on the status-quo war strategy that Washington has followed for years; the only difference would be the amount of resources field commanders are able to tap into.

But, of course, Afghanistan isn't easy. If it were easy, Afghanistan would be the crown jewel of Central Asia. Instead, the Taliban insurgency is the strongest it has ever been since the war began controlling or contesting nearly 40 percent of the country, whose pockets are flush with money made from taxing poppy farmers, and with a house across the border in western Pakistan that U.S. forces—and the Pakistanis themselves—can't or won't touch. To his credit, Trump doesn't want the same old options from the Pentagon, which is why he refused to sign on to McMaster's request for more troops earlier in the spring.

Erik Prince, the controversial CEO who built one of the world's most powerful private security contracting firms, is stepping into the breach and offering his own proposal. Through op-ed's in the Wall Street Journal and USA Today, in television interviews on CNN and CBS, and with meetings with White House officials, the former Blackwater honcho is pushing for a wholesale privatization of the war.

While Prince has kept the details of his plan under wraps, what has been leaked out or released is quite similar to what McMaster has been advocating. The only difference, of course, is that contractors would be doing the job instead of U.S. troops. More than 5,000 contractors would do the training, advising, and equipping of the Afghan national security forces so the U.S. Army and Marine Corps could gradually withdraw their personnel from the mess that is Afghanistan. Prince's strategy would also include a private fleet of combat aircraft that would provide Kabul with a reliable logistical system to transport troops and equipment off the battlefield and wounded troops to hospitals—functions instrumental in a war zone but impossible for the Afghans to do on their own. The contractors would spread out across all of Afghanistan's ninety-plus battalions, working much closer to the fighting. So close, in fact, that Prince's men would formally be brought into the Afghan army, wear Afghan uniforms and take orders from Afghan commanders.

Could such a proposal work? Defense Secretary James Mattis, McMaster, and everybody who has studied or has first-hand experience with Blackwater's past track record in Iraq and Afghanistan—one that included massive misuse of taxpayer dollars, killing of civilians during convoy duty, drinking heavily while storing weapons and ammunition in their rooms, and stealing and crashing $180,000 vehicles into barricades on base—believe it's such a big mistake that Prince should be kicked off the White House grounds.

Indeed, it's hard to argue why Washington should give Prince another chance when his employees ran wild and even threatened to kill a State Department employee performing an inspection. The September 2007 killing of fourteen Iraqi civilians at a traffic circle in Baghdad by Blackwater employees (this month, an appellate court ruled that three out of four Blackwater contractors who were convicted of manslaughter should be granted new sentences) is never far from people's' minds. If the Trump administration were to seriously consider Prince’s proposal, it would need to make sure that the mistakes and blunders of the past are nipped in the bud; there must be a series of accountability measures that reprimand, fire, or prosecute contractors who go off the reservation or commit abuses against civilians. There should also be a debate about whether U.S. taxpayers should pick up the $10 billion price tag for such an operation—if the mission is crafted to assist the Afghan army in the field, that is to the benefit of the entire NATO coalition and should therefore be financed be financed more evenly across the board.

Why the Afghan government would even allow contractors to embed with their soldiers after such a rocky history is anybody's guess. Deciding to do so wouldn't be a great political move for Afghan President Ashraf Ghani, whose political support is already eroding due to series of terrorist attacks in Kabul.

In the end, all of this is moot. The only Trump administration official interested in what Prince was offering, chief strategist Steve Bannon, is no longer a White House employee. After months of asking for a variety of options, Trump will reportedly announce to the American people tonight that sending more American soldiers to Afghanistan is the only way to turn the war around.

Ultimately, Erik Prince had too much baggage for his proposal to get an in-depth look from the Pentagon. The sad part is that after nearly sixteen years, the United States could use as many ideas as it can get.

Daniel R. DePetris is a fellow at Defense Priorities He can be followed on Twitter at @DanDePetris.