Trump May Be Rude, but That Doesn't Make Him a Tyrant 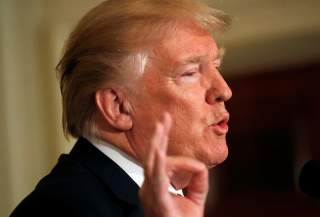 Donald Trump’s critics, both here and abroad, increasingly compare his treatment of journalistic critics with that of Turkey’s autocratic President Recep Tayyip Erdogan or even Joseph Stalin. Writing in the Financial Times, Gideon Rachman contends that “it is the similarities in the Trump and Erdogan approaches to the media and the courts that should be most chilling for Americans.” A Der Spiegel editorial likewise asserts that “Donald Trump and Recep Tayyip Erdogan demand reverence rather than truthfulness, and both are mounting dangerous attacks on the free press.”

Those inflammatory takes are mild, though, compared to the allegations that Arizona Republican Senator Jeff Flake made during a January 17, 2018, floor speech. Flake accused the Trump White House of conducting “an unrelenting daily assault on the constitutionally protected free press.” He added: “‘The enemy of the people’ was what the president of the United States called the free press in 2017. [I]t is a testament to the condition of our democracy that our own president uses words infamously spoken by Josef Stalin to describe his enemies.” An October 2017 editorial by CNN’s editor-at-large Chris Cillizza also embraced the rationale that by labeling his journalistic opponents the enemy of the people, Trump had “issued a direct threat to the free and independent media.”

Such over-the-top rhetoric borders on hysteria. Trump certainly has a thin skin when it comes to criticism and has made ugly, sometimes personally insulting, comments toward his critics in the press. But there is a vast difference between denigrating the media and displaying abrasive, even boorish, behavior and trampling a free press. Comparing Trump’s actions to those of a genocidal psychopath like Stalin is especially preposterous and disgusting. Even equating the president’s behavior toward the media with Erdogan’s mounting repression is inappropriate.

Even before the abortive July 2016 coup attempt (which may well have been a false-flag operation to justify already planned additional repressive measures), Erdogan’s actions posed a clear and present danger to freedom of the press in Turkey. His government routinely harassed and imprisoned journalists and other critics. In the week leading up to the country’s crucial national elections in November 2015, authorities seized television stations operated by opponents of the regime. The government then transferred ownership to Erdogan allies, who spent the final days before the election inundating the airwaves with “news” stories and editorials praising the president and his political party.

Erdogan’s treatment of the press has become even worse since the July 2016 incident. In October of that year, he closed fifteen opposition media outlets. Human Rights Watch issued a December 2016 report documenting the horrific decline in press freedoms. By that time, “140 media outlets and 29 publishing houses had been shut down via emergency decree, leaving more than 2,500 media workers and journalists unemployed.” Such measures, along with harsh, arbitrary censorship edicts, have made a mockery of freedom of the press. Worst of all, the Erdogan government has imprisoned more than 200 journalists, the highest total of any country in the world, and has issued arrest warrants for more than 100 others.

It is an insult to the victims of such genuine oppression to equate Trump’s anti-media verbal temper tantrums with Erdogan’s behavior. Indeed, previous U.S. administrations have engaged in far worse treatment of the media than any offense Trump has committed. The comprehensive censorship regime that prevailed during World War I effectively silenced journalistic critics of Woodrow Wilson’s crusade to make the world safe for democracy. Those who refused to be silenced joined the ranks of several hundred political prisoners who languished in jail until Wilson’s successor, Warren Harding, finally freed them.

Some of the wartime measures, especially the infamous Espionage Act of 1917, still hang like a Sword of Damocles over a free press in the United States. Indeed, Richard Nixon’s administration sought to use its alleged authority under the Espionage Act to prevent the New York Times and the Washington Post from publishing the Pentagon Papers. More recently, the Obama administration investigated and harassed Fox News journalist James Rosen under that statute for utilizing leaks of classified information in his reporting. Prominent opinion leaders periodically have sent aloft trial balloons to prosecute journalists who publicize leaks, as well as their sources, under the Espionage Act. At one time, Senator Tom Cotton certainly appeared to embrace that view.

Those are the measures and attempted power plays that pose a real menace to freedom of the press. Erdogan has perfected such techniques and, exploiting the pretext of protecting national security, presides over a system that has eradicated meaningful debate. If Trump ever attempts to adopt similar tactics, both the media and the public need to mount a fierce, uncompromising resistance. But being the victim of nasty criticism and name-calling from the White House does not come close to constituting such a threat environment. Indeed, when it comes to vitriol, Trump’s media critics have hardly been intimidated. They are quite competitive with the president in delivering insults and inflammatory accusations. And that is the way it will be in a country with a free press.

No one ever said that politeness and decorum was required on either side of the press-government relationship. Anti-Trump journalists need to stop acting like delicate snowflakes who need to be protected from a rude president. As their colleagues in Turkey and far too many other countries can testify, the situation could be far, far worse.

Ted Galen Carpenter, a senior fellow in defense and foreign policy studies at the Cato Institute and a contributing editor at the National Interest, is the author of ten books, including The Captive Press: Foreign Policy Crises and the First Amendment (1995).