Trump and Obama: On Foreign Policy, Two Peas in a Pod 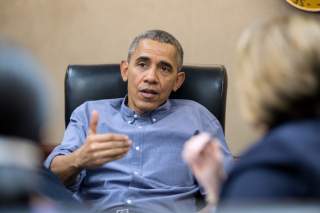 There are two lines of effort in the current campaign against Republican nominee Donald Trump. First, his Democratic opponents stigmatize him as Russian president Vladimir Putin’s lackey, as someone who would be ready to appease the aggressor in the Kremlin. Second, they contrast him with Barack Obama, a supposed Russia skeptic, and let’s-get-tough-with-Putin Hillary Clinton. These attacks should make sense only to someone who has been under coma in the last eight years. In fact, Trump’s differences on foreign policy with Obama are as much style as substance.

“I’m not confident that we can trust the Russians or Vladimir Putin,” President Barack Obama said during a press conference in the Pentagon last Thursday. Discussing a proposed plan to share intelligence and coordinate airstrikes against the Islamic State (ISIS) in Syria, Obama said that whenever the U.S. was trying to broker that kind of deal with a leader like Putin or with a country like Russia, “you have got to go in there with some skepticism.”

The Democratic president's comments were made on the same day that former CIA Director Michael Morell, in an op-ed piece he authored for The New York Times, called Republican presidential nominee Donald Trump, “an unwitting agent of the Russian Federation.” During the Cold War, he would have probably referred to him as the Soviet Union’s “useful idiot.”

Morrell’s allegation echoed similar criticism of Trump’s views of U.S. relationship with Moscow, including his repeated praise for Putin’s leadership, his call for American-Russian cooperation in a campaign to defeat ISIS, and remarks that seemed to suggest that he supported U.S. recognition of Russia’s annexation of the Crimea and encouraged Russians to hack into Clinton’s email server.

Indeed, supporters of the Democratic presidential nominee as well as #NeverTrump Republicans like Morell have launched a series of attacks against the former real estate magnate, portraying him as the Kremlin’s puppet. If elected as the U.S. president, the so-called “Siberian Candidate” would end up helping promote Putin’s long-term strategic and economic interests.

In fact, the notion that Trump was being groomed to become Putin’s Man in Washington seemed to be part of a wider election campaign strategy that aimed to convince American voters that the former reality-show host wasn’t qualified to manage U.S. national security, that he “shouldn't have his finger on the button,” as Clinton had put it, and that he lacked the “judgment, the temperament, the understanding” to manage America’s role in the world,” according to Obama.

But setting aside Trump’s erratic persona and level of familiarity with global affairs (which are legitimate grounds to question his qualifications for the job of a president), his critics pointed to his position on U.S.-Russian relationship as just another example of what was troubling them: The GOP presidential nominee’s “America First” agenda—accommodating authoritarian Russia and China; reassessing U.S. security commitments across the Atlantic and the Pacific; advocating a gradual military disengagement from the Middle East—challenges the notion that the United States should maintain its global leadership role.

From that perspective, while President Obama and Clinton are committed to traditional internationalist foreign-policy principles that enjoy bipartisan support in Washington, Trump is an “isolationist” whose views on Russia, NATO and the Middle East would amount to a dramatic transformation of U.S. global strategy.

Yet in fact, the current occupant of the White House who proclaimed last week that he was “not confident that we can trust the Russians or Vladimir Putin,” happened to be the same president who three years ago, in one of the most defining moments of his presidency, accepted a deal proposed by Putin that avoided a military confrontation between the United States and Russia’s proxy in Syria. Obama withdrew his earlier threat to use military power against Syria if it crossed “red lines” by using chemical weapons. And by relying on the goodwill of the Kremlin, he embraced the diplomacy advanced by Putin, a man that he now apparently considers to be untrustworthy.

Or to put it in more concrete terms, President Obama and his proclaimed successor in office are now castigating Trump for espousing the contours of a policy the White House had pursued in 2013: Cooperating with Russia as part of an effort to resolve a diplomatic crisis in the Middle East and doing that by agreeing to leave Assad in power in Damascus.

Let’s be fair to Obama: He made that deal not because he was Putin’s puppet or Assad’s chum. He made the decision based on what he considered to be U.S. national interests and recognition that the American public wasn’t ready to do a rerun of the Iraq War in Syria.

But then let’s also be fair to Trump: It’s not the imaginary Trump-Putin bromance (in fact, the two have never met) that is driving the Republican presidential nominee’s approach on dealing with Russia. He believes that cooperating with the Russians in Syria and in the Middle East and refraining from taking steps to remove Assad from power would be in the national interest of the U.S.

And in fact, notwithstanding all the rhetoric to the contrary employed by President Obama, that is exactly what he has been doing in recent years: Cooperating with the Russians in Syria and in the Middle East and refraining from taking steps to remove Assad from power.

The only difference between the president and the Republican nominee is that the latter suggests that Washington should integrate these and other steps into a coherent strategy that would focus on fighting ISIS (Trump would probably add that he could have achieved a “better deal” with Putin on Syria and related issues).

Appraise the overall U.S. policy towards Russia from the moment then secretary of state Clinton and her Russian counterpart pressed on that “Reset” button through the American response to Putin’s attack on Ukraine, and ask yourself: How would a Trump administration have handled the relationship differently?

It’s quite possible that a closer cooperation between Washington and Moscow would have made it less likely that the Eurocrats in Brussels would have invited Ukraine to draw closer to the European Union, the move that had sparked the Russian-Ukrainian crisis, and that Trump would have proven to be more effective in managing it.

But the criticism against Obama’s policies that have been directed by both Russophobes and Russophiles is misleading. Obama wasn’t either “tough” or “weak” on Russia, but was doing what he does best: Muddling through and choosing the path of least resistance. In this case, that entailed a series of economic sanctions against Russia.

Under pressure from Congress and the bureaucracy, it’s likely that President Trump would have made a similar decision. Perhaps he would have tried to use the crisis to achieve some sort of a grand bargain with Putin under which the United States would have recognized Russia’s annexation of the Crimea in exchange for some major concessions on the part of Moscow. Which is probably what President Obama would have done, if he were to be reelected to a third term in office.

From that perspective, it’s important to recognize that both the liberal internationalist Obama and the conservative nationalist Trump are pragmatists and not ideologues by nature when it comes to foreign-policy issues. They both eventually gravitate towards choices based on cost-effectiveness calculations. The two have rejected the grand Wilsonian designs of promoting democracy and nation building pursued by George W. Bush under the influence of his neoconservative advisors, and believe that Washington needs to readjust its global strategy to the changing international balance of power and under the pressure of diminishing economic and military resources.

Indeed, if you read the much-discussed Obama interview with the Atlantic magazine, you can imagine that Trump, if he was bit more erudite, would been making the same arguments that the United States should reduce its military commitments in the Middle East, should not allow its allies to free ride on its security commitments, and reassess its overall global strategy.

Unlike Obama, who had taken courses in international relations and American foreign policy at Columbia University and elsewhere and who is able to lay out his arguments in a way that makes sense, Trump is clearly not immersed in diplomatic history and tends to shoot from the hip and focus on personalities, not issues, when he discusses U.S. relationship with Russia and other foreign-policy issues. This explains why Trump’s foreign-policy views, which are in essence not so different Obama’s, are mocked by the pundits and open him to the charge of “isolationism.”

Obama’s interview in the Atlantic was titled “The Obama Doctrine,” but since Obama (not unlike Trump) doesn’t really have a foreign-policy “doctrine,” it should have been titled, “I am sick and tired of the Middle East and want to get out of there ASAP,” which basically sums up the sentiments of both the current Democratic president and the Republican presidential nominee. The presidential candidate who doesn’t seem to share those sentiments is the one who is running on the Democratic ticket.