Trump Should Be Wary of Saudi Arabia's Crown Prince 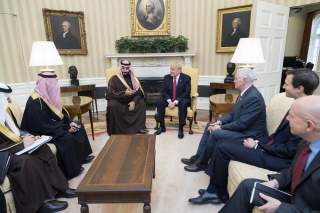 Crown Prince Mohammed bin Salman, the thirty-two-year-old Saudi crown prince who is shaking the wealthy desert kingdom by its roots, has been a very busy man over the past several weeks. The scion of King Salman and the real power behind the Saudi throne, MbS is currently in the middle of a coast-to-coast trip in the United States, where he is meeting all kinds of important people, from President Donald Trump and former Secretary of State Henry Kissinger to the CEO’s of Microsoft and Boeing. When the prince is not schmoozing rich guys on Wall Street, he is giving interviews to major U.S. media like Time magazine. He called for a long-term U.S. troop presence in Syria during that interview; and during a prime time interview with 60 Minutes last month, MbS discussed in considerable detail why he has been such a stickler against corruption from powerful and wealthy members of his extended royal family.

The purpose of Mohammed’s visit to the United States is to demonstrate to Riyadh’s most important strategic ally—and to the American people at large—that Saudi Arabia is genuinely making strides to be a more inclusive, socially tolerant and economically diversified nation. On that front at least, it appears that Saudi Arabia’s de facto ruler is having some success. Thomas Friedman of the New York Times is extremely enamored with MbS’s campaign to remake the Saudi Kingdom into a more liberalized place, devoting a special column to the subject. David Ignatius of the Washington Post did something similar, meeting the crown prince in Riyadh and writing that he witnessed “a cultural ferment” during his brief stay there. In just a few short years, MbS has captured the imaginations of young Saudis like himself, many of whom are underemployed and wish to break out of the old way of doing business.

What Prince Mohammed is not, however, is a good foreign-policy practitioner or a particularly great geostrategic thinker. The Middle East could use a transformative and innovative Arab leader, but the crown prince’s performance as Saudi Arabia’s defense minister makes it quite clear that he is not that leader. The cautious King Abdullah, who preferred to use checkbook diplomacy and behind-the-scenes influence, has been replaced by a bomb thrower in Crown Prince Mohammed who is aggressive to the point of being overzealous.

The war in Yemen, a conflict that just marked the beginning of its fourth year, was supposed to be Mohammed bin Salman’s way of demonstrating grit, toughness, and smarts to his rivals within the royal family and to Riyadh’s supporters in the West. The Saudi bombing campaign against the Houthis had a simple objective in mind: reinstate the internationally-accepted Yemeni government and send Iran a clear warning that the Gulf states would not tolerate meddling in the affairs of the Arabian Peninsula. After four weeks of air strikes, Saudi military officials talked as if the war would be over.

Naturally, those assessments have turned out to be wildly off the mark. The declaration of a quick and easy success was about as meritless as George W. Bush’s infamous “mission accomplished” moment. The Saudi war strategy is increasingly a military operation without purpose, a game of whack-a-mole against a movement that is indigenous to the Yemeni highlands and therefore won’t be wiped out. The frontline has been static, the Houthis remain in control of Yemen’s major population centers, and the humanitarian abomination that has afflicted every Yemeni family and starved large portions of the country (more than twenty-two million people need some kind of humanitarian assistance to survive) worsens on a weekly basis.

Saudi Arabia’s hardline policy on Qatar, yet another MbS creation, has done very little if anything to force Doha to reorient its foreign policy towards Riyadh’s orbit. The reasons for Saudi Arabia’s naval and air blockade on its gas-rich Gulf neighbor—support for the Muslim Brotherhood, interference in the internal affairs of the Gulf monarchies through the the Al Jazeera network, and constructive relations with Iran—have not only stirred apprehension in the normally unified Gulf Cooperation Council bloc, but they have also amounted to a geopolitical win for the Iranians. Rather than frightening Qatar into submission, the pressure has buttressed Qatari support for the ruling family and helped convince Doha that an independent, “Qatar First” foreign policy is exactly the right course of action. Trade and diplomatic relations between Doha and Tehran have gone up, not down, since Riyadh organized the Gulf embargo.

Then, of course, there was the Hariri affair, when Lebanese prime minister Saad Hariri was called to Saudi Arabia and browbeaten into resigning for being too soft on Hezbollah. The prime minister’s visit to the kingdom looked to many people in the region and the West like a forced rendition. Hariri would return to Lebanon as a martyr. He optics were terrible for the kingdom and even more heinous for MbS personally.

Ever since Crown Prince Mohammed has monopolized power, a growing number of lawmakers and scholars in Washington are viewing Saudi Arabia as part of the problem rather than part of the solution.

What does all of this mean for President Trump, who seems to like the young prince and values all of the cash that the al-Saud’s have thrown to U.S. defense contractors? Two words: be wary. For while Saudi Arabia is a partner in the Middle East and has been since the end of World War II, U.S. and Saudi interests are not totally aligned. Riyadh under Mohammed bin Salman’s thumb is far more assertive, daring, and susceptible to making mistakes and implementing poor judgment. Where Washington’s interests with Saudi Arabia align, like bringing the Taliban to the negotiating table, preventing Iran from acquiring a nuclear weapon, and making progress on Israeli-Palestinian peace, the White House can and should engage. But when Saudi policy jeopardizes regional stability, foments schisms within the Gulf Cooperation Council, or exacerbates famine and death in a neighboring country, the United States cannot let itself be dragged into becoming an enabler.

Sometimes, the best thing a friend can do is tell another friend, “sorry, but you’re on your own.”