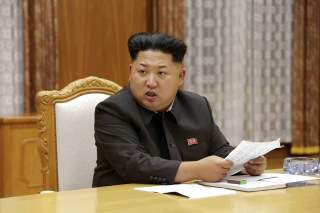 From the moment President Donald Trump accepted North Korean leader Kim Jong-un’s offer to meet in-person, there was always a lingering suspicion that the self-proclaimed master at deal-making was a little too eager to strike an agreement with Pyongyang. Democrats on Capitol Hill and even some anonymous members of his administration were telling the press that Trump was not only too optimistic about what could be achieved, but was barely taking the time to review briefing materials about North Korea’s nuclear weapons program. There appeared to be confusion, if not a total split, on how Pyongyang’s hypothetical denuclearization was to be carried out; while National Security Adviser John Bolton wanted an all-for-something-later approach akin to the 2003-2004 Libya model, Trump suggested he was flexible enough to consider a more incremental process.

In the end, the diplomatic stars failed to align. The rhetoric coming from the Kim regime over the previous few days was increasingly acrimonious. If the statements from Kim’s deputies told us one thing, it was that the North Korea of today is still the North Korea of yesterday. North Korea is highly paranoid about America’s “hostile policy,” confrontational when it feels like its diplomatic leverage has weakened, and incredibly resistant to any possible diplomatic arrangement that looks like a wholesale capitulation to the United States.

It is probably a good thing that President Trump cancelled the meeting. His team didn’t appear to be on the same page, and the president himself was vacillating between having the summit and walking away. The conventional interpretation of the summit’s postponement will claim it was a giant, missed opportunity to make an historic peace and achieve a potentially Nobel Peace Prize-winning denuclearization of the Kim regime.

That view, however, is too simplistic. The blunt fact of the matter is that it was highly unlikely that Washington would be able to cajole, pressure, or bribe Pyongyang into dismantling its treasured nuclear sword in exchange for private American investment and security assurances. Washington, after all, provided the same guarantees to Muammar al-Qaddafi when he allowed U.S. and British experts to cart away his nuclear program. Seven years later, despite those guarantees, the Libyan dictator was still dragged out of a hole and executed by his American and British-backed opponents. In the Kim family’s eyes, Qaddafi surrendered his program for American promises of wealth, prestige, and security but winded up dead. Kim Jong-un is smarter than that. He understands all too well that an operational nuclear weapons capability is his insurance policy against a U.S. military attack.

Therefore, the question now is what’s next? In his letter to Kim, Trump wisely left the diplomatic option open, writing that “if you change your mind having to do with this most important summit, please do not hesitate to call me or write.” If the White House were wise, it would also allow Secretary of State Mike Pompeo to maintain contact with his North Korean counterparts in the meantime.

The fact is communication with North Korea is essential, not only to determine whether a summit is possible at some point in the future, but also to mitigate the likelihood of misunderstanding that leads to inadvertent conflict. There may come a time in the future when diplomacy is again on the agenda and the U.S. should be ready for it. Until then, America can rely on its deterrent power to keep Pyongyang in check and ensure it doesn’t do anything stupid or rash. Kim is many things, but he is not a suicidal maniac chomping at the bit for a full-blown - or even a minor - armed conflict with a much more powerful United States. He knows that America could theoretically wipe his regime off the face of the earth. Deterrence will hold because through its sheer military strength and the durability of its alliance system in East Asia, the U.S. has the capacity to prevent Pyongyang from crossing the line into war.

Trump and Kim may very well have a meeting eventually. Or, they may not. As the president likes to say, “we’ll see.” In either case, it is time for reason over emotion. The collapse of the June 12 summit is not the end of the world - yet a bloody doomsday is exactly what will happen if Trump listens to the ultra-hawkish voices in Washington.