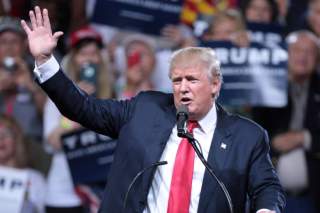 A significant majority of the recent Presidential debate was consumed with candidates Hillary Clinton and Donald Trump dousing one another with buckets of mud.  What the candidates didn’t share – and pointedly, what neither of the debate moderators asked – were matters which have existential ramifications for the United States.

Trump and Clinton each want to become America’s next commander in chief.  Yet both were silent on what they would do about the significant deterioration in relations between the US and the world’s other two major powers, or of America’s several hot wars. These are no trifling matters as the next occupant of the Oval Office is likely to face a number of crucial decisions about the China, Russia, not to mention several battlefronts throughout the Middle East.

Chris Wallace of FOX News, who will moderate the final debate Wednesday, must insist the candidates set aside blasting one another for at least part of the evening and instead share their visions for how they would handle these deteriorating international situations.

Wallace announced this past Tuesday that “foreign hot spots” was one of six subjects about which he will query the candidates. Here are three critical questions he might pose:

1. When one of you takes office in January 2017, the US will still be deeply embroiled in the Syrian civil war. Washington’s relations with Moscow have notably soured this year over the two country’s clashes in responding to the crisis.  Please tell the voters what you believe America’s vital national interests are in Syria and would you be willing to risk a major breach of relations with Russia in order to defend them?

America’s involvement in the Syria civil war has illustrated, perhaps better than even the disasters in Iraq and Afghanistan, that military power should never have been used there and has harmed American interests and security, not enhanced them.

When the President announced in September 2014 that he had authorized the use of air strikes in Syria, the only military objective he specified was an that he would “take action against targets” in order to “confront the threat posed by” the Islamic State (ISIS).  All the action succeeded in doing was to increase the suffering of the local population – and more ominously – helped usher in the overt involvement of the Russian Federation.

Since Russia began launching airstrikes of their own earlier this year, several events have caused tensions between Washington and Moscow to deteriorate significantly.  In retaliation in part because of events between the two powers in Syria and also owing to US deployment of ground forces in Central Europe, Russian Vladimir Putin has taken several actions antithetical to US interests.

He’s withdrawn from key nuclear reduction treaties, began conducting aggressive aerial patrols over US and NATO assets, and is considering reintroducing military forces in Cuba and other locations nearer to the US homeland. The situation in Syria is convoluted with literally hundreds of different and competing local and regional entities. It cannot be solved militarily. There is almost no outcome on the ground that could threaten US vital national interests. Deteriorating relations with Moscow, however, puts American interests at risk. Nothing in Syria is worth damaged relations with Russia.

2. In 2011 the United States announced a “pivot” or “rebalance” to Asia, ostensibly to influence the Asia Pacific’s “norms and rules.” Yet since that time the Chinese have significantly increased muscular naval actions there, and increased naval and other military cooperation with Russia.  What will you do as President to reduce increasing tensions with China while ensuring freedom of navigation for American commerce?

The United States has substantial commerce in the Asia Pacific region and has a definite interest in a peaceful region in which trade between nations can continue without interference.  This objective is most effectively attained by the intelligent use of diplomatic and economic assets. Had the President announced an economic pivot to the region and backed it up with substantial bilateral and multilateral diplomatic initiatives designed to foster effective trade and security relations among all states, the move might have been applauded, even in Beijing.

Instead, it was first and foremost a military pivot, including considerable and open discussions among those in the US Air Force and Navy about how to counter “A2/AD” measures (anti access and area denial measures) by certain unnamed states - China being the only one with such capabilities.  As a result of our military pivot (as well as previously mentioned conflicts in Syria), Russia has continued a re-focus to Asia Pacific itself, and more alarmingly, continued to deepen its military relations with China, including a number of increasingly complex naval exercises.

Again, these developments are not in the US national interest. It is paramount that the next Administration rebalance its efforts, not geographically, but conceptually by pivoting from a reliance on military forces to compel competitors and adversaries to behave according to our preferences, to one based on the advancement of shared mutual interests, focused on a win-win mentality. Such a move would be very difficult to pull off now because of the damage already done – and hardening positions of the military establishments within both the United States and China. But in the interest of the preservation of US security and economic interests, the change must be made quickly.

3. The US is presently fighting in one form or another seven wars in the Middle East and North Africa, many of which for more than a decade: Syria, Iraq, Libya, Somalia, Afghanistan, Yemen, and Pakistan. The fighting in Iraq is currently making some tactical progress, but the battles in Afghanistan, Syria, and Yemen are markedly deteriorating.  As President, would you continue these wars, expand them, or end them?  Please explain the American vital national interest at stake in each location that you believe justifies using the instrument of war to defend?

Here’s the bottom line: the war in Syria is damaging US national security; the air strikes being conducted in Libya extend the suffering of the civil population but does not tip the tactical balance among the many combatants; the fight against ISIS in Iraq may only be a prelude to renewed civil war between the Sunnis, Shia, and Kurds; Kabul and the US is slowly but unambiguously losing in Afghanistan; and our semi-covert contributions to conflicts in Pakistan, Yemen, and Somalia are adding to the violence while contributing nothing towards any lasting solution.

For decades American military policy has been on something like auto-pilot. American Administrations and Pentagon leaders alike have made an industry out of applying short term, tactical band aids to nearly every diplomatic symptom that raises its head in areas where the US has interests abroad. It is hard to fathom, but there is almost no strategic thought to what these tactics are intended to accomplish.

Predictably, the symptomatic fires never seem to go out. If the next Administration does not make a sea change in how the military is used, it is likely US security interests will continue to suffer. It is also increasingly possible that the status-quo policy drift may one-day result in damage to our vital national interests.

Despite the Constitutional obligation to do so, the Congress has neither debated nor specifically authorized any of the numerous wars the United States is currently fighting. Polls show that by overwhelming majorities the American people do not approve of fighting these wars and do not wish to see new ones start, most especially ones that might pit the country against modern, nuclear-armed enemies. Before voting for either candidate next month,  voters should hear directly from the candidates about their stands on these war and peace issues.