Trump's Budget Is a Bonanza for Hawks 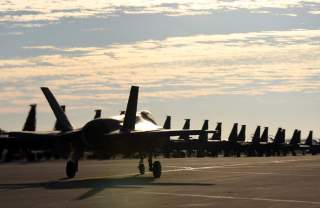 The Trump administration released its budget for FY 2019 on Monday, and the reviews are in: military spending advocates are pleased and deficit hawks are dismayed. The top line steers $716 billion to various national security functions. The Pentagon will get $617 billion in its base budget, plus $69 billion to pay for the ongoing wars. Spending on nuclear weapons tucked away in the Department of Energy makes up most of the rest. Over the next five years, the Trump administration expects to spend $3.6 trillion on the nation’s military.

The size of the active-duty force will rise by 25,900, and there is more money for operations and maintenance. Funds for the procurement of new equipment will grow by nearly $19 billion, a 14.9 percent increase over 2018. The details reveal a smorgasbord of spending going to the nation’s defense contractors:

- $2.3 billion for the B-21, the long-range strike bomber that will eventually replace B-1s and B-2s

Lastly, not to be outdone, the Missile Defense Agency is requesting $9.9 billion, a 20 percent increase over last year.

President Trump boasted “we took care of the military like it's never been taken care of before.” According to the president, Secretary of Defense James Mattis gushed “Wow, I can't believe I got everything we wanted.”

The SecDef didn’t confirm the president’s account of this conversation, but did tell reporters traveling with him to Europe this week that the new budget would “bring us back to a position of primacy.”

It’s not clear that we ever left. U.S. military spending, in real, inflation-adjusted dollars, remains well above the Cold War–average, even under the modicum of spending restraint imposed by the bipartisan Budget Control Act (BCA) passed in 2011. Indeed, as CSIS’s Todd Harrison notes, the increase “comes on top of a budget that was already higher than the peak of the Reagan buildup.”

We shouldn’t be fooled, in other words, by Pentagon CFO and comptroller David Norquist’s claim that defense spending has fallen well below the rate of inflation. That is only true if one ignores the massive drawdowns from Iraq and later Afghanistan. Most of the decline in military spending since 2011 can be attributed to the sensible decision to reduce the nation’s losses in these open-ended conflicts—though both Presidents Obama and Trump ultimately opted not to cut these losses entirely. The rest of the Pentagon’s budget has continued to rise, while the force has grown smaller.

During this period of supposed austerity and restraint, the United States expanded existing wars, launched new ones, and doubled down on policies aimed at discouraging U.S. allies from doing more to defend themselves and their interests. President Trump, in particular, has significantly expanded U.S. military operations around the world, an apparent contradiction to his “America First” rhetoric. Meanwhile, Barack Obama also gave the U.S. military plenty to do, despite his instinct to not do “stupid s---.”

Unsurprisingly, America’s soldiers, sailors, airmen and Marines, have been feeling the strain. The modest spending discipline imposed by the BCA, combined with a still-high operational tempo, compelled U.S. military personnel to do more with less.

You might think that someone in a position of authority in Washington, when confronting a massive fiscal hole, would opt for refocusing the U.S. military on those missions that are essential to U.S. national security. Instead, military spending hawks dug in their heels, refused to prioritize, or shed burdens to other capable actors, and waited for additional taxpayer dollars to make up the means-ends shortfall.

With the Trump budget, they’ve gotten their wish. But the victory may prove short-lived. Our debt-fueled spending binge, after all, is sustainable only so long as the buyers of paper believe that Uncle Sam will honor the financial commitments underlying them. And, with domestic spending already consuming a larger and larger share of total federal outlays, a rise in interest rates could pose a greater threat to the Pentagon than China or ISIS.