Trump's Challenge to 'One China' Is Playing with Fire 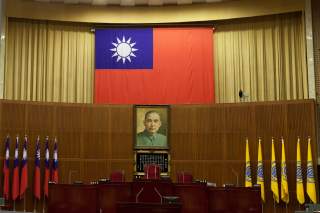 When President-elect Donald Trump took the congratulatory telephone call from Taiwan’s President Tsai Ing-wen on December 2, he violated a strict protocol that had been in place for more than three decades. Since the United States switched its diplomatic recognition from the Republic of China (the official name of the noncommunist remnant based on Taiwan) to the communist regime in Beijing in 1979, there has been no official contact between the U.S. and Taiwanese presidents. Not even staunchly pro-Taiwanese American leaders, such as Ronald Reagan and George W. Bush, thought it worth angering Beijing merely to pursue enhanced ties with Taipei.

Since the phone call, Trump has taken several other actions that have produced a dangerous chill in U.S.-China relations. Most notably, he appears to be challenging the foundation of that relationship, the fuzzy but very real “One China” policy. In so doing, Trump not only risks getting his administration off to a terrible start with a major trading partner and foreign creditor, but he has created the conditions for an exceptionally dangerous security crisis in East Asia.

Taiwan has long been a sore point with Chinese leaders. In their view, Taiwan was (and remains) a Chinese province that Japan stole from China following a war and an imposed treaty in 1895. The United States, according to that narrative, then prevented reunification following the Communist victory on the mainland in 1949, when President Harry Truman deployed the Seventh Fleet in the Taiwan Strait to thwart an invasion of Taiwan. To Chinese leaders, and apparently to most mainlanders, the restoration of Chinese sovereignty over Taiwan remains unfinished business.

Beginning with Richard Nixon’s 1972 trip to China and the dramatic U.S.-Chinese rapprochement that it launched, U.S. policymakers have had to finesse the Taiwan issue. Indeed, they have done a high-wire balancing act that might make the Wallendas envious. It began with the carefully crafted language in the Shanghai Communiqué at the end of Nixon’s trip. It asserted that all parties “on either side of the Taiwan Strait maintain there is but one China and that Taiwan is a part of China. The United States Government does not challenge that position.” The only U.S. interest was a “peaceful settlement” of the Taiwan issue. Subsequent communiques, including the one accompanying the change of diplomatic recognition in 1979, employed similar language.

Two problems with that formulation have emerged. First, a very substantial portion of the population on the Taiwan side of the Taiwan Strait no longer believes, or is willing to concede, that there is one China and their island is part of that entity. Sentiment for the status quo of de facto independence, if not outright official independence, is strong and appears to be growing stronger.

With regard to U.S. policy, not challenging a position is not the same as accepting it—a crucial difference, especially when opinion in Taiwan seems to refute the basic assumption underlying a One China policy. The lack of an official U.S. acceptance of Beijing’s position in the past thirty-seven years may become quite relevant, given the apparent attitude of the incoming U.S. administration.

The precise rationale for the Trump-Tsai telephone call is still not clear. But it angered the Chinese, and the Trump camp made matters worse by referring to Tsai as “the President of Taiwan,” instead of her official title, “President of the Republic of China.” Chinese officials don’t like either title, but the former really sets them off, because it gives the impression that Trump is embracing the language of extreme Taiwanese secessionists.

And Trump has escalated matters since then. In an interview on Fox News, he asserted bluntly that the United States was not bound by the One China policy. He added that China had repeatedly manipulated its currency to the detriment of American economic players, made outrageous territorial claims in the South China Sea, and had been less than helpful in dealing with North Korea’s nuclear threat. Trump implied that Taiwan might be a valuable bargaining chip for the United States.

Beijing’s own conduct in recent weeks is not reassuring. China seized an American naval drone that had been mapping the floor of the South China Sea. The Obama administration denounced the action and demanded that Beijing return the drone, which it ultimately did. Trump, though, viewed the incident with contempt, telling the Chinese they could keep the drone that they “stole.”

Perhaps more telling has been the implicit Chinese response to Trump’s assertion that the United States is not bound by the One China policy. The semiofficial Global Times asserted that if the new administration insisted on that position, there was little for China and America to discuss, and that China must be prepared to use force if Taiwan pushed forward on independence. Just as ominously, China’s foreign minister, Cui Tiankai, warned that sovereignty was not a bargaining chip and that no Chinese government would ever view it in that fashion. Although that position could apply to other issues, including Beijing’s territorial claims in both the East China Sea and the South China Sea, it applies with special vehemence to Taiwan’s status.

Michael Swaine, a scholar at the Carnegie Endowment for International Peace, provides an excellent rebuttal to those who blithely assume that China will back down over the Taiwan issue if the United States merely shows sufficient resolve. Swaine is correct. To most Chinese, Taiwan is about more than a control over a strategic and economic asset—although those aspects are important to Beijing too. But Taiwan lies at the core of a Chinese identity that remains bruised from China’s treatment at the hands of the West (and Japan) in the nineteenth and early twentieth centuries.

It was an extremely delicate situation, especially after the pro-independence Democratic Progressive Party scored its electoral triumph in Taiwan’s January 2016 presidential and legislative elections. Trump’s actions have made the already unhealthy atmosphere decidedly more toxic. Beijing is likely willing to bargain on most issues, including trade, North Korea, and even China’s territorial claims in the East China Sea and South China Sea. And in all of those cases, Chinese leaders will probably be flexible enough to accept less than optimal outcomes.

But my experience in dealing with Chinese diplomats and opinion leaders for three decades is that there is one issue on which they are unwilling to capitulate or consider meaningful compromise. That issue is Taiwan’s political future. Indeed, their patience even with the status quo is wearing thin. If the Trump administration repudiates the One China policy, the outcome is not likely to be a groveling Chinese retreat. It is more likely to be war.