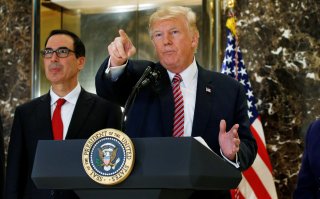 One of the benefits of having a pundit as president is that when the national moment calls for a little vitriol, you’ve got a natural ready to go. That was the advice that I gave to Donald Trump in the UK Spectator earlier this week: turn a little of his trademark scorn on the white nationalists who brought domestic terrorism to Charlottesville. If Trump’s idol Andrew Jackson could threaten to hang a man during the South Carolina nullification crisis, and his Republican predecessor Ronald Reagan mercilessly derided the Soviet Union, then surely the president could at least dust off “evil losers,” the moniker he applied to jihadists in Manchester, to describe the KKK.

Trump didn’t take my advice. (And if the president isn’t listening to thirtysomething freelance writers, who is he listening to?) Instead, after getting it mostly right in a tardy address on Monday where he called the white nationalists “repugnant,” he unleashed his inner Fox News contributor at a press conference on Tuesday and began hedging, rationalizing, mouthing off. He called the violence in Charlottesville a “horrible moment for our country” but stressed that a lot of the demonstrators had showed up to “innocently protest.” “You had some very bad people in that group. You also had some very fine people on both sides,” he said. He accused the media of ignoring what he called the “alt-left,” the often-violent counterdemonstrators under the radical banner of “Antifa.”

We can debate all day the merits of what Trump said. He’s entirely correct that Marxist militants have been causing violence, too, starting riots in Portland and Sacramento—and with a Republican politician having been almost assassinated two months ago by a left-wing radical, the media can stow its outrage on this point. He’s very much incorrect that there were “fine people” demonstrating in Charlottesville. This was a rally organized explicitly by a white nationalist and abandoned by more moderate patriot groups because they were worried it was turning into a cattle call for neo-Nazis. The skinheads who marched on the University of Virginia with tiki torches the night before couldn’t have been clearer about the message they wanted to send.

The real problem was the equivocation in Trump’s message, the back-and-forth, this-but-that, on-one-hand-yet-on-the-other. A genuine evil had just been flaunted on the campus of an American university, one that traces back to the darkest alcove of our history, one so anachronistic that many assumed something like Charlottesville could never again happen. The fact that we’re calling it just “Charlottesville”—signifying it only by its location—shows the psychological impact of what happened there. The fact that the Daily Stormer, a website intimately involved in last weekend’s protests, ran a headline about Heather Heyer, the woman killed in the violence, calling her a “fat, childless, 32-year-old slut,” shows the magnitude of the hatred at work.

Presidents these days have assumed an abundance of extraconstitutional responsibilities, but one of their actual duties is acting as head of state. That means speaking as the national voice during times of crisis. Yet Trump’s voice on Tuesday was belligerent, which in context made it sound quavering. He refused to grasp the gravity of the moment, treating its details as just more points of contention to be haggled out with the press. Had he said something like “The white nationalists who brought chaos—chaos—to Charlottesville were pathetic bedwetters, okay? They’re evil losers. I condemn very, very, very strongly what they did. This bigoted violence, as well as the Antifa violence we’ve seen in Portland and elsewhere, cannot be tolerated. America is better than this,” and left it there, even his most vehement critics would have had little to work with. Instead, in coming on too strong, he came off as weak.

There are presidents who are lucky enough to govern during periods of calm—Bill Clinton comes to mind here. Donald Trump doesn’t have that luxury. He’s assumed office during what may prove to be America’s most politically tumultuous period since the 1960s, and he himself was an instigator of that unrest back during his presidential campaign. It’s incumbent on him now to behave like a president and apply a little balm to an inflamed nation. Leave the kvetching analysis to pundits like me.