Trump's Israel Embassy Move Would Have Been Disastrous 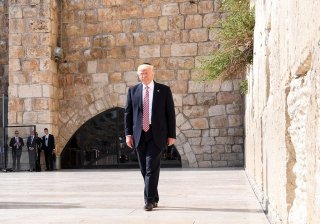 In March 2016, during the height of the combat that was the Republican presidential primary, then-candidate Donald Trump addressed a giant crowd at the annual AIPAC conference in Washington and made a promise that nearly every presidential candidate in the past has made. “We will move the American embassy to the eternal capital of the Jewish people, Jerusalem,” Trump declared to the crowd, earning a standing ovation from thousands of people in the arena. For a man who loves to be loved, it was a great moment.

Now that he’s president of the United States, however, he’s come to the very same conclusion on the embassy question as that of his predecessors: moving the U.S. embassy to Jerusalem is actually a really, really bold step that, if taken lightly, could roil the region, close the door on a Middle East peace process that is already dormant, and hurt Washington’s critical relationships with Jordan and Egypt—the only Arab states that have signed formal peace treaties with Israel. On June 1, Trump issued his first waiver under the Jerusalem Embassy Act, which will delay the relocation of the American embassy for another six months. It was a big decision for a president who just months ago hinted that U.S. diplomats may soon be doing their daily work in Jerusalem rather than Tel Aviv.

Trump will get considerable heat from Israel’s powerful right-wing parties, whose members assumed that Donald Trump would be the most pro-Israel president in America’s history. Israeli prime minister Benjamin Netanyahu is clearly disappointed with Trump’s decision, even if he probably knew that it was coming. Sheldon Adelson, one of the wealthiest donors to the Republican Party (and someone who was reportedly “furious” when Secretary of State Rex Tillerson said suggested on Meet the Press last month that Trump was trying to determine whether moving the embassy would be worth the trouble) will likely be furious again.

Criticism from these corners aside, Trump is making the right decision—even if it hurts him in his gut. Failing to renew the waiver authority would have been one of the dumbest foreign-policy moves that the administration could have made in its first five months.

If there is one thing that can be said about Donald Trump, it’s that he seems to be enormously interested in resolving the Israeli-Palestinian conflict for good. Why he wants to resolve it—promote peace in the region, massage his ego, get some much-needed positive coverage, or win a Nobel Peace Prize—is irrelevant. What matters is that the dispute gets solved, a goal that has proven time and again to be a mission impossible. To make the impossible into the doable, Trump can’t afford to put campaign politics and emotion above rationality and incrementalism.

All indications are that President Trump is sincere in wanting to make history. Indeed, he’s done and said (with the exception of his past allusion to a one-state solution) all of the right things so far: he’s dispatched his special envoy, Jason Greenblatt, to the region on numerous occasions to talk with a diverse group of constituencies and get the lay of the land; he’s requested Netanyahu to rein in the type of settlement building that would be overly provocative; he’s hammered the incitement issue with Palestinian Authority president Mahmoud Abbas; and he’s met with Netanyahu and Abbas face to face on two occasions. The Trump administration isn’t sitting on its hands, waiting for the Israelis and Palestinians to take the initiative; according to Haaretz, the White House “is considering drawing up a set of principles for resolving the core issues.” The administration, in other words, is paving a path that one hopes will eventually lead to both sides coming back to the table.

Given all of the behind-the-scenes machinations, moving the U.S. embassy to Jerusalem wouldn’t make any sense, particularly at this stage in the process. Whether there would be a spark of violence in the Arab world if Trump neglected to extend the waiver is difficult to say. But what’s certain is that Mahmoud Abbas, a man past his prime—suffering from pathetic approval ratings from his fellow Palestinians—would be placed in the uncomfortable position of choosing between two terrible alternatives: ruining whatever credibility he has left in the bank by continuing to participate in a peace process, or looking to Washington like an obstructor by dropping out in protest.

Netanyahu and Abbas are stubborn, strong personalities. They aren’t moved one way or the other easily. Netanyahu views Abbas as a dangerous inciter of violence against his people and a politically weak leader. Abbas sees in Netanyahu a man who doesn’t give a damn about the Palestinians and who has fooled the international community for years about his sincerity for peace. It will take a miracle to get these two men engaging again.

Trump bought himself some more time by deferring on the embassy question.