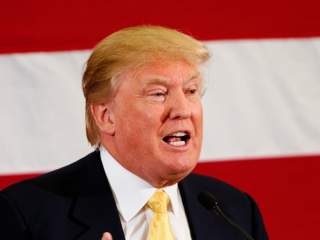 I had the opportunity to attend GOP front-runner Donald J. Trump’s foreign-policy speech at DC’s Mayflower Hotel, courtesy of the good folks here at The National Interest. I left with more questions than answers, but one above all others: After Trump fires all the members of the DC foreign-policy establishment, who will be left to craft what he promised would be “a new foreign-policy direction for our country”?

Trump made his case for why a new direction is needed. “After the Cold War,” he explained, “our foreign policy veered badly off course. We failed to develop a new vision for a new time.” Then, over time, it only got worse. “Logic was replaced with foolishness and arrogance, and this led to one foreign-policy disaster after another.”

And he concluded with words that might appeal to the general public, but that surely must have sent chills up the collective spines in Washington, DC, and countless foreign capitals: “No country has ever prospered that failed to put its own interests first. Both our friends and enemies put their countries above ours and we, while being fair to them, must do the same.”

But, moments of originality aside, there were mostly the usual GOP complaints about Obama’s failings, the supposed “humiliations,” and the incoherence of the current administration’s approach to the world.

“Our foreign policy is a complete and total disaster,” he said. “No vision, no purpose, no direction, no strategy.” Borrowing a Ted Cruz meme, Trump faulted Hillary Clinton for refusing to say the words “radical Islam.” He offered up the obligatory reference to the Benghazi scandal (though not the correct one). And there was the generic alarmism about the desperate state of the world. “It is a dangerous world,” he said, “more dangerous now than it has ever been.” (No. It’s not.)

Meanwhile, there was the usual foolishness about “rebuilding” the U.S. military, with Trump deploying an actual fact to back up his claim that Obama had gutted Pentagon spending. Alas for Mr. Trump, it is a misleading statistic. The 25 percent real decline in U.S. military spending since 2011 is mostly attributable to the sharp reduction in spending on the wars in Iraq and Afghanistan. Since Trump claims to have always been opposed to the Iraq war (though the evidence for that is suspect), and celebrated his opposition to nation-building wars (e.g. Afghanistan), one would think that he would be pleased that that spending has declined. But he didn’t elaborate.

The notoriously mercurial Trump did make some important points, however. He pledged that, “unlike other candidates for the presidency”—Hillary Clinton, perhaps?—“war and aggression will not be my first instinct.” And he stressed the importance of diplomacy. “A superpower understands that caution and restraint are signs of strength.” George F. Kennan would be pleased.

Trump also called out the inside-the-Beltway foreign-policy establishment for its abysmal track record. He pledged to “look for talented experts with new approaches, and practical ideas.” And he said he would not surround himself “with those who have perfect resumes but very little to brag about except responsibility for a long history of failed policies and continued losses at war.”

The lack of accountability among the foreign-policy intelligentsia is striking, though it has not escaped notice by others. Weekly Standard editor Bill Kristol’s nearly unbroken track record of recklessness and folly was even the subject of a Washington Post Style section feature. (H/T Justin Logan)

But the #NeverTrump movement includes a few experienced foreign-policy hands who do not share Kristol’s unabashed enthusiasm for more U.S. wars. Since Trump is unlikely to call on any of the #NeverTrumps for their advice, and since they are unlikely to offer it, where will he go for fresh thinking and new ideas? With each new speech (including this one), he turns away some of the very people who might have helped him.

Those who believe that America's racial and cultural diversity is a source of strength, not weakness, will be appalled by Trump's nativist instincts and anti-immigrant rhetoric. Americans with any understanding of the modern global economy will be turned off by his talk of reversing trade deals that have expanded access to foreign markets for producers and consumers alike. Meanwhile, anyone anxious about the growing power of the presidency (including those who complain most loudly about Obama’s abuse of executive power) cannot be encouraged by Trump's obvious authoritarian tendencies.

Fresh thinking about U.S. foreign policy is badly needed. But Donald Trump doesn’t get it. For example, he might have consulted with those who crafted and signed the famous New York Times advertisement from September 2002 “War with Iraq Is not in America’s National Interest.” If he had, he would have found that every living signatory to that sadly prescient letter supported what Trump calls the “disastrous deal with Iran.”

Trump rails against the inequities of U.S. alliances, especially NATO, in which just four of twenty-eight member states spend the minimum 2 percent of GDP on defense. On the other hand, he never references those individuals who opposed NATO expansion in the post-Cold War era, each successive round more dubious than the one that preceded it.

Indeed, Trump seems utterly oblivious to any of the international-relations theories that might bring coherence to U.S. foreign policy (be it offshore balancing, defensive realism, or restraint). And he is equally unaware of much of the relevant history of U.S. foreign policy, hence his curious embrace of the slogan “America First.”

Historical baggage aside, if Trump’s object was to bring clarity to his foreign policy vision, he failed. “America First” is a bumper sticker, not a strategy. He is right to call for “shak[ing] the rust off of America's foreign policy.” It is “time to invite new voices and new visions into the fold.” But Donald J. Trump’s isn’t the right one.