Trump's Syria Tactic Could Bring Warring Parties to the Table 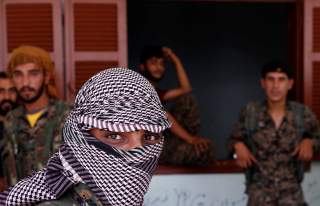 Anybody who was expecting Presidents Donald Trump and Vladimir Putin to pull a repeat of the 1945 Yalta Conference during their first meeting at the G-20 Summit went home sorely disappointed. Absent the handshakes, the hundreds of camera clicks from photographers, and the customary pleasantries between world leaders, the Trump-Putin confab concluded after two hours and fifteen minutes with only a few small achievements. Those people in Washington and Brussels who were concerned that Trump and Putin would carve up the world into western and Russian spheres of influence could rest easy that no groundbreaking diplomatic agreements had been made behind closed doors.

There was one deal, however, that was finalized last Friday: a de-escalation agreement in a patch of southwest Syria that Bashar al-Assad’s regime forces and non-jihadist opposition rebels have been fighting over. According to the agreement’s terms, a line of contact will be created that separates pro-Assad and opposition forces in the area, which will in turn help decrease violence and accelerate humanitarian-assistance deliveries that have been stalled due to security concerns. Russian foreign minister Sergey Lavrov said that Russian military police would be on the ground in order to ensure that the line of contact is respected. Additionally, the United States and Russia expect to establish an operations center in Jordan to monitor implementation of the plan. Syrian government aircraft will not be permitted to fly in the de-escalation zone. This is a noteworthy development because it essentially carves out a no-fly zone in southwest Syria.

We knew something was in the works because Secretary of State Rex Tillerson sent out a lengthy statement a day before Trump departed on Air Force One, describing Washington’s willingness to cooperate with the Russians on the very type of de-escalation accord that was signed at the G-20. True to form, Tillerson depicted Syria’s latest ceasefire agreement as a sign that Washington and Moscow's objectives are slowly coming into alignment. “I think this is our first indication of the U.S. and Russia being able to work together in Syria,” Tillerson said, an odd declaration given the fact that the Russians signed similar accords with similar terms last year. None of those joint agreements were implemented and the Assad regime saw them as an opportunity to increase air strikes in other parts of the country without having to worry about the opposition taking advantage of the pause. While it was noble for former Secretary of State John Kerry to try to enter a de-escalation agreement with Russia, his hours of conversations and meetings with Lavrov in Europe were, in hindsight, ill-conceived attempts to freeze the conflict across the entire country of Syria.

While the terms may be similar, Tillerson might have a better chance in making this ceasefire work. Kerry was far more aspirational in his outlook, hoping that force of personality and sheer willpower would help him come to an arrangement with the Russians that would establish a truce in all of Syria’s territory—and that the Russians would actually stick to that agreement after a few weeks. The Trump-Putin ceasefire is concentrated in a specific part of the country, which means that only specific armed groups are involved. There are no Kurdish factions, Turkish soldiers or significant contingents of Islamic State jihadists operating in southwestern Syria, at least compared to the Idlib, Aleppo and Raqqa provinces. If Russia police are stationed along the line of contact as Lavrov suggests, then Moscow’s presence on the ground will be a deterrent to any Assad regime activity (the last thing Damascus wants is accidental altercation where a bomb dropped from a Syrian aircraft kills or injures a group of Russian personnel). And if Moscow can find a way to hold Assad or Iranian-backed militias accountable if (or when) they breach the ceasefire, then Syria’s three southern provinces could become the zone of stability that Tillerson envisions.

In addition to the four de-escalation zones that Iran, Turkey and Russia are still working to codify, the fighting freeze in southwest Syria is the latest stage of a larger trend in how the big powers are dealing with the Syria problem today. Resolving the civil war has been illusory for the past six and a half years, with the Assad regime refusing to talk about reforming, the opposition refusing to budge from its demand that Assad leave office, and the multiple players in the war making a consensus solution that much harder to reach. It now appears to be the Trump administration’s policy to manage the Syrian conflict rather than to resolve it, relying on region-wide truces and hoping that the warring sides will be more interested in the diplomatic track once the battlefield starts to quiet down.

A lot of foreign-policy experts won’t like this change in approach, because it still leaves open the question about Assad’s political future. It would be difficult to find anyone on Capitol Hill who believes that Assad should stay in power for the foreseeable future—let alone for the next five years—given how many civilians he has killed, how many cities he has leveled and how many prohibited weapons he has used. Unfortunately, unless—and until—everybody’s interests in Syria are aligned, the best thing that the United States can do is work with Moscow to freeze the fighting in place.

It’s not an ideal solution. Indeed, it’s not a solution at all. But in managing the violence, the Trump administration will at least be saving lives without getting the United States more deeply enmeshed in a Middle Eastern proxy war.