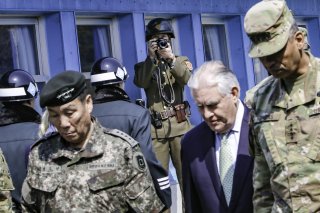 So far, the Trump administration seems to think that threats or ultimatums serve as an effective foreign policy. The president’s simple two-word message to North Korea: “Gotta behave.” This, after Vice President Mike Pence visited the Demilitarized Zone dividing North and South Korea, saying that “the era of strategic patience is over” and citing the U.S. missile strikes in Syria and use of the GBU-43/B Massive Ordnance Air Blast bomb (MOAB for short) in Afghanistan as examples to Pyongyang “not to test [President Trump’s] resolve or the strength of the armed forces of the United States.” Subsequently, Pence reiterated that “all options are on the table” and warned that “the shield stands guard and the sword stands ready.”

North Korea’s reaction to all of this? A propaganda video showing missiles destroying a U.S. city. So it doesn’t seem likely that North Korea will just roll over and “abandon its reckless path of the development of nuclear weapons, and also it’s continual use and testing of ballistic missiles”—as Vice President Pence has admonished—just because that’s what America wants and what America is telling it to do.

So how should the administration handle North Korea?

President Trump says he wants China “to solve the North Korea problem” and there is certainly great merit in having Bejing involved in a resolution. China has incentive because it recognizes that North Korea’s nuclear ambitions are adverse to its own interests. And China has leverage it can exert as North Korea’s most important ally, biggest trading partner, and main source of food, arms and energy. However, the Chinese perspective is that stability on the Korean Peninsula is preferred to denuclearization. To the Chinese, the prospect of a North Korean implosion resulting in a failed state on their border is scarier than Kim Jong-un with nukes. So convincing China to act in America’s interests will require more than threatening to impose protectionist trade tariffs.

As someone who sees himself as the master of “the art of the deal,” Trump should realize that the United States may have to negotiate with—not dictate to—China if we want their help dealing with North Korea. Luckily, we have some bargaining chips to use. First, the United States could take less of a hard line towards China’s building of man-made islands in the Spratly Island chain in the South China Sea. They do not pose a threat to U.S. national security or the some $5 trillion in oceanic commerce that passes through those waters. So the United States could afford to back off a little on the Spratly Islands. This would also have the added benefit of giving U.S. allies and other countries in the region more incentive to take responsibility for their own security concerns, rather than cheap riding at the expense of the American taxpayer.

The other bargaining chip we have is the recent deployment of the Terminal High Altitude Area Defense (THAAD for short) missile defense in South Korea—a decision actually made during the Obama administration. THAAD is designed to intercept incoming missiles and was deployed to South Korea in response to the North Korean missile threat. Beijing, however, is apparently concerned that the THAAD radar could be used to track Chinese missiles—but not necessarily shoot them down. So perhaps it’s possible to be creative and configure THAAD in a way that is not seen as threatening by the Chinese. Moreover, if the Chinese are successful in pulling in the reigns on North Korea’s nuclear and missile programs, then the need for THAAD should lessen. As such, removing THAAD from South Korea could be held out as a reward to the Chinese for a successful outcome.

There is also the question of what Pyongyang would get if it was willing to give in to U.S. demands. Here again, the United States has a bargaining chip. North Korea has repeatedly called for an end to the joint U.S.-South Korea military exercises that are conducted every March. China has suggested that a quid pro quo might be a suspension of those exercises in return for the suspension of North Korea’s nuclear and missile activities. But the United States has rejected this proposal. Yet why not give it a try? Doing so would be relatively low-risk. If North Korea responds positively, it would an important first step to achieving a resolution to tensions on the Korean peninsula. And—like the Spratly Islands—provide incentive for both South Korea and Japan to take greater responsibility for their own security.

But the most important part of being able to make any deal is understanding what the other side wants out of the deal and what is non-negotiable. In the case of North Korea, the rhetoric of U.S. policymakers is that North Korea wants nuclear weapons and long-range missiles to attack the United States. Certainly, that is a possibility that cannot and should not be ignored. However, if Kim Jong-un attacked the United States with nuclear weapons, he would face the prospect of utterly devastating retaliation by the vastly superior U.S. strategic nuclear arsenal. Ultimately, like his father and his father’s father before him, Kim Jong-un is more interested in his own survival.

Indeed, it is just as—if not more—likely that North Korea’s nuclear ambitions are about staving off U.S.-led regime change. What do Saddam Hussein and Muammar el-Qaddafi both have in common? Both did not have nuclear weapons and both were on the receiving end of regime change. That reality is probably not lost on Kim Jong-un.