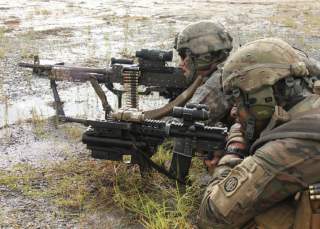 After two wars, several smaller interventions, and billions of dollars in military aid for American allies in the Middle East, is the United States any better off or more secure than it was before? U.S. policy in the Middle East is undoubtedly one of the most pressing foreign policy issues of our time.

In the above video, top international relations scholars address whether deep American military engagement in the Middle East has improved U.S. strategic standing. For the Cato Institute’s Chris Preble, who led this discussion, the answer is simple: “No, obviously not.”

According to Preble, the region is not strategically important because there are no states in the area that threaten the United States existentially. Also, there is a growing belief that the United States can’t effectively remake the Middle East, even if it had compelling reasons to do so. In the words of Andrew Bacevich, of Boston University, “Invading and occupying countries with the expectations of transforming them is a dumb idea—it doesn’t work.”

In fact, the strategy of overthrowing regimes has had enormous knock-on consequences. So much so that Massachusetts Institute of Technology professor Barry Posen calls them “the deepest and most disruptive engagements we’ve had.” In many cases (e.g., in Iraq and Libya), the countries intended to benefit from American intervention have ended up worse off than before. Not only that, but the process has produced an enormous amount of resentment and created ungoverned spaces for this resentment to fester.

John Mearsheimer believes this keeps happening because the United States is “so remarkably secure that … we can cause all this chaos and destruction [that] blows back into places like Europe and spreads around the Middle East” while most Americans pay no direct price. As a result, the foreign policy establishment can continue to insert the U.S. military into other states’ problems without the sort of backlash that would actively reflect the skepticism of the American public.

Michael Desch, of the University of Notre Dame, provides the final word: “The paradox is that there’s widespread skepticism that we can nation-build at home … but that same salutary humility doesn’t extend to nation-building abroad.”

Watch the above video to see how top scholars of international relations grapple with one of the most pressing issues in current U.S. foreign policy. To see how these scholars deal with other issues, including the rise of China and the ISIS menace, check out the rest of our series on today’s foreign policy challenges.