Barack Obama: The Most Partisan U.S. President Ever? 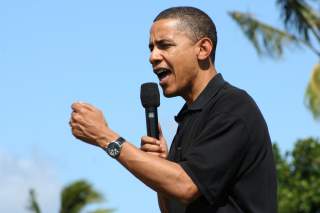 With each day that ticks off the calendar, President Obama gets closer and closer to handing the reigns of executive power to his successor. After eight tumultuous years battling congressional Republicans on everything from healthcare and government spending to Planned Parenthood and the Iranian nuclear agreement, it's probably not a stretch to assume that Obama is looking forward to a few months off with his family in Hawaii—even if there is a lingering thought in the back of his mind that he could have won a third term if the Constitution allowed him to.

Historians will look back at Obama's tenure and likely come to the inescapable conclusion that his was one of the most partisan in America's existence—a time when government shutdowns were just a regular cost of doing business. It is far too soon to determine with any accuracy where President Obama stands compared to his colleagues in the annals of U.S. history. But it is still nevertheless appropriate to say that Obama, like all presidents before him and all of the presidents that will come after, made mistakes that will muddy his legacy.

Whether justified or not, here are the five biggest failures that will at least partially color President Obama's two terms.

1. Guantanamo Remains Open: Some presidential candidates, like Richard Nixon, Ronald Reagan and Donald Trump, chose to run on a law-and-order platform. Barack Obama ran as a rule-of-law candidate, someone who argued during his first presidential campaign that the United States was traveling further and further away from the international laws, norms and conventions that America helped establish. The detention facility at Guantanamo Bay was Enemy Number One for the constitutional law professor, a prison that incarcerated people based on mere suspicion of terrorist activity without recourse to the rights that typical defendants are given in the U.S. justice system.

On day one, Obama drew a line in the sand: Guantanamo will be closed in a year, and detainees too dangerous to release will be transferred to maximum security prisons in the United States. That order has proven to be a distant aspiration; the White House vastly underestimated how resistant lawmakers on both sides of the aisle are to bringing terrorists into their backyards. A near-miss terrorist attack on Christmas Day 2009, the administration's PR debacle on Khalid Sheikh Mohammed and the acquittal of Ahmed Ghailani on all but one count was all Congress needed to pass transfer restrictions of Gitmo detainees. As soon as Obama signed that law, Guantanamo's future was all but determined.

2. No Mideast Peace Deal: Obama appeared different from other American presidents on the Israeli-Palestinian conflict; he had far more empathy for Palestinians suffering in the occupied territories and was much more honest on the subject of settlements. He appointed former senator and Northern Ireland peace negotiator George Mitchell as his special envoy to the conflict on his second full day in office. And five months later, he spoke to a packed house at Cairo University, declaring that “[t]he situation for the Palestinian people is intolerable,” and that “America will not turn our backs on the legitimate Palestinian aspiration for dignity, opportunity, and a state of their own.”

Obviously, the Israeli-Palestinian conflict bedeviled Obama just as it defeated every other American president over the past five decades (Clinton to his credit came the close). The administration's demand that Israel suspend all settlement construction in the West Bank and East Jerusalem, even within the major settlement blocs that will be part of Israel anyway, riled up Prime Minister Benjamin Netanyahu to the point that the personal relationship between the two never fully recovered. One hundred thousand settlers moved into the West Bank during Obama's tenure, a fact that Palestinian leaders never let anyone forget. And when Netanyahu and Abbas finally started talking, the White House never really seemed interested in carrying the load; the task was delegated to George Mitchell and Secretary of State John Kerry, both of whom were met with finger-pointing, blame-gaming and an unwillingness to compromise from both the Israeli and Palestinian delegations. By the last few weeks of Obama's second term, his administration was relegated to warning about the dark days ahead if the situation stays the same.

3. The Syria Red Line: When Syria's Bashar al-Assad disregarded Obama's warning that any use of chemical weapons would be met with a U.S. military response, the eyes of the world trained on the 44th president to see whether he would in fact scramble the B-2 bombers. Obama seemed deadly serious, telling the American people that he made the decision that the use of military force was required to defend some of the most sacred laws in the international community.

Then came Russian President Vladimir Putin's idea that perhaps Washington and Moscow could force Assad to remove his declared chemical weapons stockpile diplomatically. The gambit worked, but the perception of the commander-in-chief buckling and bumbling under pressure, afraid to pull the trigger, was cemented. Arab allies like Saudi Arabia were incensed, and U.S. diplomats around the world started receiving doubts from their colleagues about whether Washington was a reliable ally. As Secretary Kerry admitted during his last press conference last week, “[t]he perception hurt.” The fact that more chemical weapons were removed from Syria than would have been destroyed during any U.S. military operation was swept under the rug.

4. Partisanship Got Worse: Remember Barack Obama's 2004 Democratic National Convention speech that catapulted him to national fame, in which he said, “there's not a liberal America and a conservative America; there's the United States of America”? That turned out to be the worst assessment of his entire political career.

Obama began the presidency with the utmost positivity and a desire to break the partisan nonsense that dominated Washington politics during the George W. Bush years. But it was an ambitious goal that he simply couldn't meet. In fact, he often contributed to the partisanship himself. Although it's indisputable that congressional Republicans were as obstructionist as a political party could be, Obama's decision to slam the Affordable Care Act down America's throat without a single Republican vote didn't help matters. He didn't do the legislative work that would be required to pass "no fly, no buy" gun control legislation, instead using the bill's failure as a political talking point. And Obama's attacks on the GOP presidential nominee during overseas trips were unprecedented, something that Paul Saunders labeled as "reckless and disturbing" in these pages. Obama, in short, will leave his successor with a more polarized Washington.

5. A Nation that Remains At War: The fact that the U.S. military is still engaging terrorist groups across seven separate countries with special operations forces, drones and the U.S. Air Force isn't a failure for President Obama per se. But it is an example of him getting ahead of himself and being too quick to declare victory and get the United States off a war footing. His 2013 speech in front of the cadets at the National Defense University was quintessential Obama: not every terrorist group mandates a U.S. military response, Al-Qaeda is a shell of its former self and the time has come for Americans to wind down a decade of war.

These pronouncements have gotten Obama in trouble. Whether it's calling Islamic State the “jayvee team” of terrorist groups (just four days prior to Obama's comments, ISIL captured the Iraqi city of Fallujah) or debating what constitutes combat operations in Afghanistan, events have had a tendency to embarrass Obama and render his remarks out-of-touch. In Washington, the words a president uses can be just as impactful on perceptions as the actual policy, and in this President Obama's words have often been detached from what is really going on.

None of this is to say that Barack Obama was a terrible president. It will be decades before historians come to a definitive conclusion one way or the other. President Bush left office with an approval rating in the low thirties, but even his numbers are starting to increase as time goes by. But just as Bill Clinton carries the ghosts of Rwanda and Jimmy Carter will forever be seen as the guy who couldn't rescue American hostages in Iran, Obama will be carrying some of these failures and/or mistakes with him after his presidency ends.