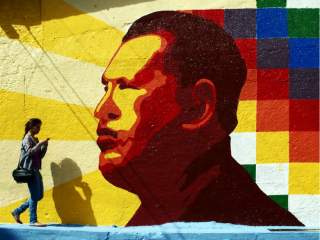 Since the beginning of the twenty-first century, officials in the United States and other hemispheric countries with moderate or conservative governments have been troubled by the surge of support for so-called Bolivarian populism. In retrospect, the triumph of Nicaragua’s Sandinista revolution in 1979 may have been the first major manifestation of that trend. But the defeat of President Daniel Ortega in the 1990 elections (and the willingness of the Sandinistas to accept that electoral rebuke) suggested that the initial leftist victory did not signal a trend. Indeed, the 1980s and 1990s seemed to epitomize the growing strength of neoliberal or conservative political forces in Latin America.

The election of Venezuela’s populist champion Hugo Chávez in 1999, however, heralded the emergence of a countertrend. That became even more apparent in the years that followed, when new, radical leaders took office in Ecuador and Bolivia, and Ortega returned to power in Nicaragua with a new electoral mandate in 2007. Chávez and his allies quickly became a thorn in the side of the United States. U.S. officials began to fear that a Bolivarian populist revolution might sweep Latin America.

Washington’s worries have been directed against three aspects of the populist regimes. First, those governments tend to engage in shrill anti-U.S. rhetoric reminiscent of the Sandinistas in the 1980s and, to some extent, even Fidel Castro’s communist regime throughout the Cold War. Chávez’s insulting mockery of President George W. Bush during a September 2006 speech to the UN General Assembly was a relatively mild version of the comments coming from Caracas and other Bolivarian capitals. Beyond engaging in verbal bashing of the United States, Chávez and his allies were openly hostile to Washington’s political and economic values and objectives.

Equally unsettling, the left-wing rulers employed increasingly authoritarian tactics to consolidate their domestic power and weaken political opponents. Chávez systematically eroded Venezuela’s democratic foundations—bypassing the legislative branch, ruling by decree, closing or taking over media outlets critical of his conduct and harassing political opponents and leaders in the business community. Similar, albeit somewhat milder, abuses have been committed by Rafael Correa in Ecuador and Evo Morales in Bolivia.

Perhaps most troubling from the standpoint of Washington’s policy objectives, the Bolivarian governments developed ties with radical armed insurgent groups in neighboring countries and forged increasingly close relations with countries such as Russia, China and Iran—countries that U.S. officials viewed with suspicion or (in Iran’s case) open hostility. The connections that the leftist governments developed with Moscow and Beijing even raised concerns about peer competitors of the United States gaining economic, political and perhaps even military footholds in the Western Hemisphere. The onset of ties with Iran added worries about state-sponsored terrorism.

Chávez was the chief offender in that regard. In the summer of 2008, a Russian general spoke of the possibility of Russia acquiring a military base in Venezuela. While civilian leaders in both Caracas and Moscow quietly disavowed such intentions, in the following months Russian naval forces conducted joint maneuvers with Venezuelan units, and there was a proliferation of arms sales, which topped the $4 billion mark by September 2009. In 2012, Chávez announced another $4 billion “loan” from Russia to purchase tanks, air-defense missiles, and other hardware.

Washington also has been keeping a wary eye on China’s relationship with the populist regimes. The $4 billion loan that Beijing extended to Caracas in the summer of 2011 was just one sign that the PRC might be fishing in troubled political waters. That trend continued with additional multibillion-dollar loans to Venezuela in late 2014 and early 2015, under Chávez’s successor, Nicolás Maduro. U.S. officials also are concerned about China’s involvement in the proposed construction of a $50 billion interoceanic canal across Nicaragua that would compete with the Panama Canal. Although the principal contractor is a Hong Kong company not under the direct control of the Beijing government, it would still give Chinese interests a major commercial, and possibly strategic, beachhead in the Western Hemisphere. Moreover, Wang Jing, the shadowy Chinese billionaire behind the funding of the project, is a man with close ties to the Beijing regime.

Since China regards loans and investments in foreign countries as having political and diplomatic as well as economic implications, Beijing’s growing interest in the Western Hemisphere has attracted the attention of U.S. officials and members of the U.S. foreign policy community. The extent of Beijing’s interest became even more apparent in May 2015, when Premier Li Keqiang made a high-profile trip to four key South American countries. The primary purpose of the trip seemed to be economic, and it was a solid success.

As Beijing’s economic and diplomatic ties with Latin American countries expand, though, the foundation exists for possible security ties. Beijing may have a major incentive to counter the Obama administration’s touted “strategic pivot” (or rebalancing of U.S. military forces) to East Asia. With good reason, Chinese leaders wonder whether the pivot is the initial stage of a containment policy directed against their country. It remains to be seen whether Beijing intends to build on the foundation of its growing economic and political relations with Latin American countries and try to develop a strategic presence in the region. If China does take that step, Washington would confront the first serious geopolitical competition that it has faced in the Western Hemisphere in decades.

But it has been the budding relationship between the Bolivarian governments, especially Venezuela, and Iran that has concerned U.S. leaders the most. Chávez even occasionally hinted that his country might have nuclear ambitions (albeit, he insisted, of a purely peaceful nature), and Tehran could certainly be a source of both expertise and technology on that front. Needless to say, such comments have greatly agitated hawks in the United States. Although Maduro has continued to cultivate diplomatic and economic ties with Iran, he has not made the mistake of his predecessor in highlighting those links. He especially has avoided any mention of nuclear cooperation, and with that change, the Obama administration’s concerns about possible Iranian mischief in the Western Hemisphere also have receded.

Washington’s worries regarding the populist regimes have not gone away, but they have faded in the past two years. Strident anti-U.S. rhetoric still emanates from Caracas and other capitals, including Maduro’s accusation in early 2015 that the United States was deliberately seeking to use plunging global oil prices to destroy regimes of oil producing countries that refused to do Washington’s bidding. But Obama and his foreign policy team generally treat the Bolivarian regimes more as annoyances than meaningful threats to Washington’s diplomatic and economic interests. At least they did until the president’s surprise announcement in March 2015 declaring Venezuela to be a national security threat. It was a curious exaggeration and an untimely move that seemed to be a reaction to growing domestic political pressure on the president from conservatives who apparently dislike nearly every aspect of his foreign policy.

A more relaxed U.S. posture should be possible, especially since the strength of the latest round of populism in Latin America appears to have peaked during Obama’s first years in the White House. Although Chávez was elected to a new term in October 2012, his victory over a conservative challenger was much narrower than his previous triumphs. Despite the brass-knuckles political tactics used against opponents during his years in office, Chávez won barely 55 percent of the vote (a 10-percent victory margin compared to 27 points in 2006), and his party lost seats in the national legislature. His death from cancer in March 2013 removed the principal champion and symbol of authoritarian populism.

Maduro has found it challenging just to hold on to political power, to say nothing of exporting revolutionary fervor. The victory of the moderate-conservative opposition in recent midterm legislative elections underscores his waning political fortunes. The dramatic decline in oil prices since late 2014 has exacerbated economic problems for major producers such as Venezuela, and that is increasing the degree of domestic discontent with the Maduro government. The United States and other hemispheric nations now have more reason to worry that rising political instability in Venezuela might spiral out of control than that the Bolivarian contagion might spread. Other Bolivarian populist figures are also under siege. Voters in Bolivia just rejected a referendum that would have allowed Evo Morales to run for a fourth term as president.

Washington’s fears, so prominent just a few years ago, that Chávez and his populist allies in other countries were the harbinger of a hemispheric Bolivarian revolution were unwarranted. Relatively moderate regimes in Brazil, Colombia, Chile and Mexico now seem to be the model that a majority of Latin Americans favor. Even in cases where apparent Bolivarian soul mates came to power, they sometimes turned out to be considerably less radical than Chávez. That was certainly true of President Luiz Inácio Lula da Silva in Brazil and his successor, Dilma Rousseff. It was equally true of Peruvian President Ollanta Humala, who was elected in 2011.

In the end, the upsurge in populist support was not an irresistible tidal wave, much less one that posed a serious threat to U.S. interests. Instead, it was merely a temporary and manageable annoyance.