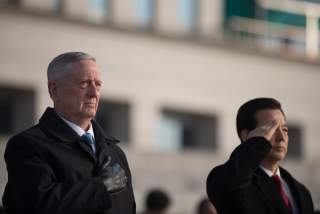 Donald Trump’s often sharp criticism of U.S. allies during the 2016 presidential campaign gave some hope to even jaded realists that his administration might make significant changes in Washington’s ossified security policy. Those hopes, cautious as they were, are fading fast. The initial weeks of the Trump administration suggest a continuation of the status quo with few, if any, modifications. For all the rhetoric about “America First,” the new president’s foreign policy thus far looks a lot like what his predecessors pursued.

That is especially true regarding Washington’s relations with its longtime allies in Europe and northeast Asia. During the campaign, Trump accused the allies of failing to pay their fair share of the costs of collective defense or taking sufficient responsibility for their own defense. On more than one occasion (including when he was president-elect), he branded NATO as obsolete. Japan and South Korea fared little better in terms of his rhetoric. At one point, Trump sneered at Japan and said that if another nation attacked the United States, then the Japanese would probably just watch the conflict on their Sony televisions.

Yet one of his earliest actions as president was to call German chancellor Angela Merkel and reiterate the U.S. defense commitment to NATO, telling her and other European leaders that he considered the alliance to be of “fundamental importance.” He did not explain how an alliance could be simultaneously obsolete and important.

Shortly after his interaction with Merkel, the president dispatched Secretary of Defense James Mattis to East Asia to reassure both Japan and South Korea that America’s devotion to their defense remained steadfast. His fawning “reassurance tour” should annoy Americans even more than Barack Obama’s so-called apology tour during the early months of his first term.

Mattis seemed to strike all the wrong notes from the standpoint of American interests. He assured the South Koreans that the United States remained determined to protect their country, even as North Korea continued to build its ballistic missile and nuclear weapons capabilities. Yet as my colleague Doug Bandow has pointed out on numerous occasions, South Korea is a flagrant security free rider. Not only does the country have twice North Korea’s population, but for decades it has had an economy far larger and vastly more sophisticated than that of its rival. It can afford to build whatever defenses it needs, but instead of doing so, South Korean leaders have chosen to continue to rely heavily on the United States for their country’s defense. Instead of “babying” South Korea by offering unconditional security assurances, Mattis should have told the South Korean government to grow up and accept responsibility for building a more robust national defense.

The secretary’s fawning performance in Seoul was an exercise in steely-eyed realism, though, compared to his actions in Japan. Even as Tokyo continues to spend a pathetic 1 percent of its gross domestic product on defense, it is adopting an increasingly assertive foreign policy, especially toward its principal regional rival, China. Japanese leaders blatantly expect the United States to backstop Japanese policy if tensions with Beijing continue to rise.

Mattis foolishly played into the hands of Japanese leaders who seek to continue the country’s free ride on Washington’s military exertions while pursuing a more uncompromising policy toward China. That combination is especially worrisome regarding Tokyo’s dispute with Beijing over the Senkaku Islands in the East China Sea. Mattis waded right into the middle of that tense dispute and assured Prime Minister Shinzo Abe’s government that the U.S. bilateral alliance with Japan covered the indisputable Japanese territory as well as the disputed islands.

In fairness to Mattis, this was not a change in policy. The Bush and Obama administrations had interpreted the mutual defense treaty in the same fashion, and offered similar assurances to previous Japanese leaders. It was unwise then, and as China grows stronger militarily, it is even more unwise today.

Unfortunately, Mattis’s comments indicate that the Trump administration is unlikely to prune even the least justified U.S. commitments to allies. It is one thing to cooperate with Japan to limit the power of a rising China. Such a stance is perfectly consistent with a realist foreign policy—even one of realism and restraint. It is quite another matter to put America at risk to defend a pile of uninhabited rocks, especially when it is unclear which country has the stronger legal claim to those rocks. (Indeed, one could make the case that China’s claim to the Senkaku Islands has greater validity from the standpoint of both proximity and history.)

If the Trump administration won’t distance itself from that kind of reckless commitment to an ally, then all the rhetoric about pursuing a more focused and interests-based foreign policy is just that: rhetoric with no meaningful substance. The new administration has failed, and rather spectacularly failed, its initial foreign-policy tests.