What Democrats Can Learn from Philadelphia's Navy Yard 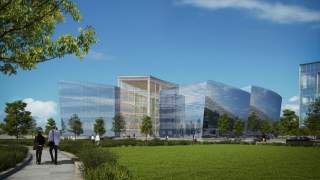 As Democrats descend on the City of Brotherly Love for their national convention this week, they might be tempted to visit the home of some of the city’s famous businesses, such as the Tasty Baking Company, maker of delicious Tastykakes; clothier Urban Outfitters; or pharmaceutical giant GlaxoSmithKline, a DNC sponsor.

Today, they are able to visit all of these places, located near the far south end of Broad Street, where that iconic Philadelphia boulevard meets the Delaware River.

But a generation ago, most people couldn’t go there. The Philadelphia Naval Shipyard and the adjacent Philadelphia Naval Station were closed to the public. Today, The Navy Yard is home to more than 150 businesses, employing more than twelve thousand people. It has restaurants and retail shops. And last year it hosted one hundred events that drew more than one hundred thousand visitors. One of the bigger events of the year is the Blue Cross Broad Street Run, a ten-mile race which starts at Broad and W. Fisher, and ends a quarter of a mile inside of the Navy Yard’s gate. The opening of the former military property made this all possible.

That isn’t the story you typically hear. When a military base is slated for closure, elected officials and community leaders rally to stop it. They form “save our base” committees and implore the Pentagon to look elsewhere. They argue that their base is essential to the nation’s defense, and that its closure would have a devastating impact on the community, and the wider regional economy. They envision that the military will leave behind empty buildings and vacant lots, a permanent blight on the landscape.

I know. I was there, in graduate school at Temple University in the mid-1990s. The shipyard’s demise had been a long time coming. In April 1991, Secretary of Defense Dick Cheney included the Philadelphia Naval Shipyard, and the associated properties collectively known as the Philadelphia Naval Complex, in a list of bases to be closed. The Base Realignment and Closure (BRAC) Commission concurred. The community’s political leaders fought hard against the decision. Senator Arlen Specter even took the case to the Supreme Court. But, in the end, the BRAC Commission’s decision stood. Philly’s base and shipyard closed officially in 1995.

The mood was grim. Early attempts to find a major commercial shipbuilder to replace the Navy sputtered. It seemed impossible to believe, in those early months, that the South Broad Street community could recover. The city wasn’t doing much better. An estimated 482,000 people—one quarter of its population—had moved out during the previous quarter century. A poll taken in September 1995 found that 43 percent of Philadelphia’s residents wanted to join them someplace else.

But the C in BRAC is misleading. Bases aren’t closed. Properly managed, and with a little bit of luck, most former military facilities are repurposed for other chiefly nonmilitary pursuits. And some make the transition quite quickly.

Of the fifteen instances of defense conversion that I’ve studied so far, Philadelphia’s Navy Yard is one of the most impressive. (I write about it here.)

A private-public partnership with the city of Philadelphia, the Philadelphia Industrial Development Corporation, and Liberty Property Trust is responsible for managing the area’s rapid redevelopment. The sheer range of businesses there demonstrates the benefits of a diversified economic base, located on 1200 acres near some of Philadelphia’s most famous landmarks. Indeed, its location was always a key selling point. For example, the city’s sports teams play on Broad Street, within walking distance. The Wells Fargo Center, home to the Sixers and Flyers, also hosts performances and shows. Unsurprisingly, the Courtyard Marriott hotel, which opened in 2014, is at capacity for Eagles football games and major concerts. Plenty of open space, a number of historic buildings, and pleasing views of the river, make for a great walking tour. Regular shuttles carry visitors and workers to and from Center City.

The secret of the revival of one of Philadelphia’s great landmarks isn’t a very well-kept one. Politico has some great pics here. The Navy Yard is doing so well that there are rumblings of future expansion to include 1.5 million square feet of rental housing, which would transform the Yard into “a live-work, 24/7 microcosm of edgy, urban living,” according to the Philadelphia Inquirer.

Philadelphia has a lot of things going for it, but I hope city officials make a point of bragging to visitors from the nation’s capital this week about what has happened to their former military base. They might even give them a tour. If they do, it could weaken opposition in Congress to another round of base closures, which is so desperately needed. Indeed, the opponents might come around to the view that the opening of a nearby base is precisely the boost that a flagging local economy needs.