What Difference Will 10,000 Troops Make in Afghanistan? 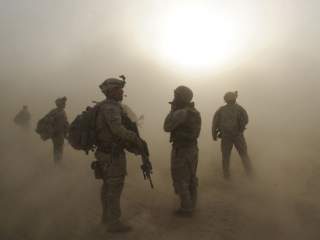 It has been a common refrain since America’s armored bashing of Saddam Hussein in Desert Storm that the United States has the greatest military in the history of the world. Aside from being questionable in its accuracy, this hubristic belief among American political leaders and opinion makers reveals a deeply flawed understanding of what combat power can actually achieve. It also exposes a troubling difficulty many have with understanding the difference between strategy and tactics. Together the two misconceptions result in continuously flawed policy decisions, and American interests continue to suffer as a result.

The latest example came last Tuesday when CNN’s Wolf Blitzer asked Rep. Brad Sherman (D-CA) if he felt the United States should leave 10,000 U.S. troops in Afghanistan. Rep. Sherman’s response exposed a common and deeply held misunderstanding of what combat troops can accomplish. When asked if troops should stay, the congressman replied, “I think so,” and then explained why the troops were necessary. “If we ignore the Middle East, the Middle East will still not ignore us," he said, adding, "We have been dragged into this civil war. . . for the future of Islam.” There is in this exchange a wholly unquestioned assumption that 10,000 U.S. troops on the ground in Afghanistan will make a positive strategic impact. It will not

I was deployed to Afghanistan in 2010 and 2011 at the height of the famous surge when the United States had 100,000 troops on the ground. At that time Kandahar and Helmand provinces in the south and Kunar province in the east were three of the most contested areas of Afghanistan and had the highest concentration of U.S. forces. In a certain operation I joined an American infantry unit on a patrol to a remote combat outpost in Kunar province. At one point I asked the young lieutenant leading the patrol how hard it was for the Taliban to operate in his zone. “Well, basically we own no more than one hundred meters on either side of this road. The Taliban have free rein everywhere else.” As an afterthought he added, “Actually, it’s probably more accurate to say we influence things one hundred meters either side of the road.”

In the most important area to American security interests, supported by a large number of troops and reinforced by unmatched aerial and satellite reconnaissance (not to mention on-call fighter jet support) all we could do was influence the area near the road. The Taliban had almost complete freedom to operate everywhere else in that part of the country. I saw virtually the same story in areas of the east and south of Afghanistan. This isn’t to suggest the troops were not disciplined and highly proficient at their craft. But they aren’t Marvel comic book characters. They can’t do the impossible.

Yet it seems many leaders and policy-makers base their foreign policy recommendations on just such a belief. It is understandable how American leaders would desire the strategic outcome of securing Afghanistan. But before suggesting a given number of combat troops can accomplish this goal, they have to understand what can be tactically achieved by those troops in the terrain and against that enemy. One doesn’t have to be a twenty-year combat veteran to understand why.

In order to pacify a given geographic area, a combat unit must be able to successfully accomplish a given set of tactical tasks. If these tactical missions cannot be achieved, then strategic failure is certain.

Yet it is possible for the military force to successfully win every tactical engagement throughout their deployment and still fail strategically. Why? Because it isn’t enough to be tactically effective where the forces are deployed. They have to succeed at enough of them in sufficient concentration to reach the strategic objective. Clearly the United States could not accomplish the strategic goal of securing Afghanistan with 100,000 troops successfully accomplishing every tactical task given. Upon what basis, then, could policymakers today honestly suggest that a force one tenth that size could pull off what the larger force could not?

It is understandable why legislators and policymakers would want to assure the people they have a plan to secure American interests. But before recommending plans to achieve strategic outcomes, they must first articulate how their plan is going to work on the dirty, messy and violent tactical ground. Otherwise we build in almost certain strategic failure before the first boot has hit the ground.

Like we’ve mostly done for the past fifteen years.

Daniel L. Davis is a widely published analyst on national security and foreign policy. He retired as a Lt. Col. after 21 years in the U.S. Army, including four combat deployments. The views in these articles are those of the author alone and do not reflect the position of the U.S. Government. Follow him on Twitter @DanielLDavis1.