What Has Trump Learned in 100 Days? 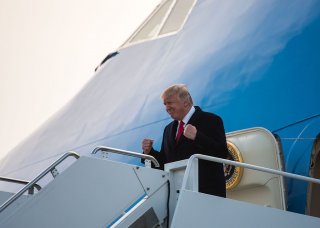 What can we say about Donald Trump’s presidency after one hundred days? It has been interesting, but perhaps not as interesting as many people feared. At least not yet.

Sweeping changes in domestic policy, including especially his planned crackdown on immigrants and refugees, have been stymied in the courts, and by the same budget realities that Barack Obama confronted. Similarly, on foreign policy, the Trump administration has largely continued, or expanded on, the Obama record. The changes implemented have been matters of degree, not kind.

This shouldn’t come as a surprise. The world didn’t actually change as a result of Trump’s election, or at the moment he was inaugurated. A political solution to the Syrian Civil War didn’t materialize. Seoul remains within range of North Korean artillery, as it was when Obama was president. And the hard budget math hasn’t changed either. President Trump may genuinely want a larger military, but he hasn’t discovered a magic formula for paying for it.

The mood of the country, or of U.S. allies, might have changed had President Trump stuck to key elements of his campaign rhetoric. But he hasn’t undertaken a wholesale reexamination of U.S. alliances. If anything, the Trump administration seems prepared to reenergize or expand on U.S. alliance commitments. Still, the president’ s “America First” rhetoric has clearly unnerved those who have grown accustomed to sheltering under the American security umbrella.

Meanwhile, even though candidate Trump spoke optimistically of working with Vladimir Putin and Russia, the allegations of Russian meddling in U.S. politics have inhibited anything approaching rapprochement. This seems unlikely to change. The latest revelations swirling around former national security adviser Michael Flynn suggest that we haven’t heard the last of this story.

President Trump is capable of learning, as when Xi Jinping lectured him during their meeting at Mar-a-Lago about the history of relations between China and Korea. Trump had once declared confidently that China could solve the North Korean problem single-handedly. He came away from the leaders’ tête-à-tête singing a different tune. “After listening for 10 minutes, I realized it’s not so easy,” the president told the Wall Street Journal. “I felt pretty strongly that they had a tremendous power [over] North Korea. . . . But it’s not what you would think.”

But the president still has much to learn. He should have listened to the voices urging him not to abandon the Trans-Pacific Partnership. This decision, as my Cato colleague Dan Ikenson observed, ceded economic power and influence to China, already a dominant player in the Asia-Pacific and, increasingly, globally.

He also hasn’t learned budget math, or budget politics. As of this writing, Trump the dealmaker has not yet fashioned a grand budget compromise that would break the bipartisan Budget Control Act’s spending caps. Republicans remain opposed to tax increases, or higher budget deficits, and Democrats will block any military spending increases that are paid for by cuts in the nondefense portion of the discretionary budget. And neither party is willing to tackle out-of-control entitlement spending. So the budget impasse continues.

Although the worst-case scenarios of a Trump presidency have not yet materialized, the president’s judgment and temperament continue to be cause for concern. As Max Boot notes, Americans are becoming accustomed to Trump’s idiosyncrasies, but that doesn’t mean that we like them. His staunchest supporters are still with him, but his overall popularity is lower than Gerald Ford’s at the same point in his presidency, after he pardoned Richard M. Nixon in September 1974.

Many of Donald Trump’s antics are unpleasant and embarrassing, but the president’s lack of knowledge about critical details could also prove dangerous. If he doesn’t have the time to be lectured by the Chinese president, or educated by his senior advisors on the intricacies of a particular problem—or if he merely doesn’t choose to listen—he might stumble into a crisis. That scenario concerned me most when Donald Trump first burst onto the political scene, and it concerns me still. The president reminded us all Thursday evening that “major, major conflict” with North Korea remains on the table.

So it’s too soon to render a judgment on the Trump presidency. And that is usually the case after just one hundred days.

Will we know much more after the next hundred days? Check back later.