What Will Assad Do Next? 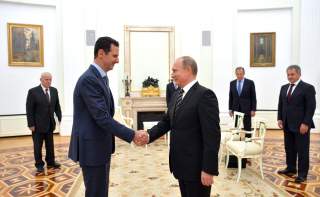 The pictures and footage coming out of Eastern Aleppo are absolutely horrifying. In fact, horrifying may be too tepid a word; genocidal or apocalyptic is more like it.

Four years of intense combat in what has been an unforgiving war on civilians has culminated in the destruction of a once proud, bustling and cosmopolitan city. As Jan Egeland, the UN humanitarian coordinator for the crisis said, “It took 4,000 years to build Aleppo; one generation managed to tear it down.”

Bashar al-Assad has never been one for negotiating with his opponents. The regime that his father helped create and led for thirty years is built on fear and brute force. And that is exactly how Assad the son has chosen to fight the war; anyone in Syria, however young or old, is an enemy of the state and a terrorist sympathizer if they even live in areas controlled by opposition fighters. Indeed, Assad’s no-holds-barred approach to the war is a major reason why the United Nations and the humanitarian community are downright frightened as to what will happen to the young men who are eventually forced to transit into regime-controlled territory.

As tens of thousands of East Aleppo residents prepare to save themselves and what is left of their families by hopping on to government buses away from the carnage, one thing is abundantly clear: Assad has won the most critical battle of the entire war. But there is something else that is also clear; the war itself will not end. Indeed, the Syrian conflict post-Aleppo will not only continue, but could evolve in myriad ways that even the most knowledgeable Syria analyst will find difficult to predict.

Next Stop for Assad: Idlib

If there is any area of the country where the Syrian government’s presence is minimal, it’s Idlib province. Northwestern Syria is home to a medley of militant groups, from the most extreme in Jabhat Fateh al-Sham to some of the more mainstream. Idlib also happens to be an area where tens of thousands of civilians from other areas of the country have been transported in government-initiated “amnesty deals,” which are essentially surrender agreements for opposition fighters and civilians to move north in exchange for their lives. Idlib has become a semi-refugee camp where Syrians from as far south as Daraya to as far north as Aleppo are squatting with friends or relatives.

Assad therefore looks at Idlib as a threat to his own power and authority. Any section of Syria that is outside of his regime’s grasp is a potential threat to his legitimacy. With his bombard, starve and siege strategy having worked so well in Aleppo, there is nothing really holding Assad back from using the same tactics in towns across Idlb. Unfortunately for the Syrian people, the most likely scenario is an increased pace of Russian and Syrian air operations in Idlib province as a prelude to a pro-government ground incursion.

Vladimir Putin has been Bashar al-Assad’s saving grace throughout the entire war. Absent Russia’s military operations in the air, Russia’s diplomatic cover at the Security Council and Russia’s advisers on the ground, Assad would have been strung up by a noose or forced into exile years ago. Yet just because the Russians have been solidly behind Assad’s campaign so far doesn’t necessarily mean that they buy into the dictator’s strategy of retaking all areas of the country.

Lest we forget, Moscow isn’t really fighting for Assad at all, but rather, for the existence of a central governing authority that it views as the only alternative to the establishment of a state dominated by terrorists or anarchy (think Libya, Yemen and Iraq post-Saddam.) When Syrian officials spoke about extinguishing their enemies militarily earlier in the year, Russia’s UN ambassador Vitaly Churkin sternly rebuked the comments, saying that “[i]f they [the Syrian regime] proceed on the basis that no ceasefire is necessary and they need to fight to a victorious end, then this conflict will last a very long time and that is terrifying to imagine.”

There is no use covering for the Russians; they’ve been an unconstructive enabler of Assad’s war machine for nearly six years now. But Russia’s national security interests don’t perfectly correlate to Assad’s personal interests either; Moscow, for instance, co-authored a Security Council resolution that demanded an all-inclusive, Syrian-led and Syrian-owned political resolution to the war. Now that Aleppo has been recaptured by Assad forces, the Russians could conceivably make a renewed push on their Syrian proxies to embrace the UN-led negotiations with the opposition and press the government’s demands diplomatically rather than through continued, indiscriminate bombardment in the field. Assad is in the strongest position he’s ever been in since the war began, so the Russians may very well argue to their Syrian colleagues that now is the ideal time to start being cooperative.

There is no question that the Syrian army, for all intents and purposes, is a shell of its former self. Thankfully for the Assad regime, the attrition within government forces has been partly addressed through the importation of foreign Shia militias funded by Iran who have served as front-line, pro-government shock troops. Suspending any further ground operations into rebel-controlled territory, preserving his gains in Aleppo and the suburbs of Damascus and waiting to see what the next U.S. administration will do on the Syria issue would therefore be Assad’s safest option.

Assad has spoken about President-elect Donald Trump in positive terms. On Russian television, he described Trump as “a natural ally” if he truly is intent on working closer with Russia. And in an interview with RT less than a month later, Assad hinted that if Trump is politically courageous enough to defy the foreign policy establishment in Washington, his government would be a partner of the United States in the counterterrorism effort.

The regime of course doesn’t particularly care whether Trump reaches out or not. What they are cautiously optimistic about is that the new administration in Washington will decrease what is already minimal military assistance to the moderate opposition in favor of closer ties with the Kremlin against the Islamic State and al-Qaeda. Waiting it out and assessing how the Trump administration will behave — not being overly provocative or brutal in the meantime — is certainly an option.

Whichever path Bashar al-Assad travels, a war that has killed over 500 thousand people, displaced half of Syria’s population, resulted in an influx of refugees into Europe and destabilized the Middle East will continue into the foreseeable future.  It just depends on how bloody that continued war will be.