What Would Happen If North Korea Attacked Washington, DC with a Nuclear Weapon? 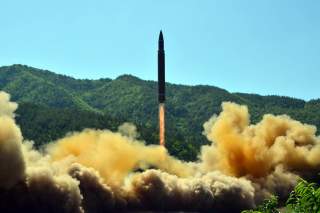 “The test-fire of intercontinental ballistic missile (ICBM) Hwasong-15, newly developed under the political resolution and strategic decision of the Workers’ Party of Korea, was successfully carried out,” the Korean Central News Agency announced after Pyongyang conducted its twenty-third missile test since February. “The ICBM Hwasong-15 type...is an intercontinental ballistic rocket tipped with [a] super-large heavy warhead which is capable of striking the whole mainland of the U.S.”

How serious should the United States take this declaration from North Korea’s state propaganda arm? Apparently seriously enough; although Pyongyang’s newscasters can use comically colorful, overly exaggerated language at times, scientists and experts in the field of missile technology used the first twenty-four hours after the test launch to educate the American people about how powerful this Hwasong-15 rocket really is. The missile reached a height of 2,780 miles, the highest elevation that a North Korean-manufactured projectile has traveled to date, before crashing into Japan’s Exclusive Economic Zone after a 590-mile flight.

Immediately after the launch, David Wright of the Union of Concerned Scientists wrote a short assessment of the test, where he calculated that this particular missile—if arced properly on a normal flight-path with a light warhead attached—could land anywhere in the continental United States. "If these numbers are correct, then if flown on a standard trajectory...this missile would have a range of more than 13,000 kilometers (km) (8,100 miles),” Wright wrote. “This is significantly longer than North Korea’s previous long range tests, which flew on lofted trajectories for 37 minutes (July 4) and 47 minutes (July 28). Such a missile would have more than enough range to reach Washington, D.C.”

Pyongyang couldn’t be any clearer about what its overriding objective is: developing, testing, and successfully fielding a reliable and durable nuclear-tipped ICBM that can pummel an American city on the mainland United States. Most analysts studying the North Korean regime believe that the purpose of this ICBM is not to conduct some irrational nuclear first-strike on Washington or New York, but rather to deter a U.S. military attack or a regime-change campaign by ensuring that any U.S. strike would result in sever pain and punishment on the American mainland. The Trump administration would be much less likely to ponder a military operation against Pyongyang if such an operation ran the risk of placing hundreds of thousands of Americans in the crosshairs of North Korea’s nuclear weapons program.

And hundreds of thousands of American casualties in a hypothetical North Korean nuclear attack is not an overstatement. According to Alex Wellerstein’s NukeMap program, the casualty rate is right on the money.

The effects of a 250 kiloton North Korean nuke that blasted in Washington, D.C. would extend far outside what we typically refer to as the Beltway. The air blast of the explosion alone would destroy the White House, the International Spy Museum, the Washington Monument, the Smithsonian, the U.S. Capitol Building, and all of the fancy bars and restaurants that reporters and government officials use as rendezvous points to socialize over drinks and spill the dirt on their colleagues. Every building within the air-blast radius would be destroyed, with the fatality rate reaching as high as 100 percent. If you were a tourist at the very end of the Washington Mall, perhaps taking pictures as the Jefferson Memorial southwest of the White House, your chances of survival are higher. But the fatality rate would still be 50–90 percent, with blistering and radiation poisoning so unbearable that you may wish that you were killed instantaneously like White House staffers or congressional aides across town.

If you’re a student at Howard University, you are a bit luckier—but not by much. You may escape with your life (if you were in a building at the time of the explosion, there’s a very high probability that you would be crushed underneath concrete, cement and glass), but the physical side-effects of a nuclear attack would be the stuff of horror movies. Passengers waiting for their flights at Ronald Reagan International Airport across the Potomac can expect third-degree burns which destroy the nerve endings in the skin.

The final death tally based on the parameters of this particular nuclear strike: 412,880 fatalities and 527, 490 injuries, casualties approaching nearly a million people.

Is any of this a guarantee? Not my any stretch.

There is no evidence that would suggest that Kim Jong-un is a crazy, sociopathic nutcase who is spending billions of dollars and years of investment just to nuke an American city or kill hundreds of thousands of Americans. The only thing he values on about the same wavelength as himself is the regime that his family has built over seven decades. If Kim wants to be the man presiding over the deaths of millions of his citizens and the elimination of his country, then sending a nuclear ICBM towards Washington is the best way to do that.

The numbers, however, are a reminder of how truly ugly and calamitous a military conflict between the United States and North Korea could be. Add nuclear weapons into the scenario, and the calamity would look a bit like the Hollywood blockbuster Sum of All Fears—except actual people would be dying.