When It Comes to Foreign Policy, Hope Is Not a Strategy 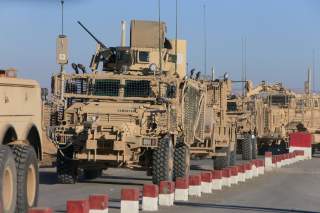 On Friday morning, I attended the unveiling of the National Defense Strategy (NDS) by Secretary of Defense James Mattis. It was his first public address of 2018, and the secretary and his staff were justifiably proud of having completed their work ahead of schedule, and less than a month after the public release of the National Security Strategy (NSS). In that sense, the timing was impressive.

Given the choice, however, I suspect that DoD officials would have preferred not to release the new strategy, the first issued in the last ten years, on the same day that Washington was rife with talk of a government shutdown. The several hundred in attendance at the event held at Johns Hopkins University’s Paul H. Nitze School of Advanced International Studies (SAIS) chuckled knowingly when, in response to a question about whether “a government shutdown [would] have serious ramifications on military operations? And, if so, what are your plans for mitigation?”

Mattis responded with a simple “yes.”

Mattis admitted that the vital business of defending the United States from foreign threats would continue. Submarines would remain on three-month deterrence patrols. Ships at sea, and forces fighting in the field, wouldn’t freeze in place. Drone operators would remain at their posts.

Still, there was an awkwardness to the situation: the head of the single largest federal government agency, spelling out how the department planned to spend money that it, technically speaking, didn’t have—and, crucially, that it didn’t even have a reasonable expectation that it would ever get.

Secretary Mattis didn’t ignore the giant elephant in the room. Far from it. Both in his prepared remarks, and in his response to questions from the audience, the secretary candidly discussed the fact that the strategy, as written, requires more resources than are made available under the budget caps in the bipartisan Budget Control Act.

It wouldn’t be accurate to say that the document ignores the resource constraints, but it is fair to say that it doesn’t take them seriously enough. It counts “moving to a more resource-sustainable approach” as a priority, and “delivering performance with affordability” as one of eleven key objectives. Among “three distinct lines of effort” for the department, the NDS lists “reforming...business practices for greater performance and affordability.”

But such efficiency measures can’t make up the difference between means and ends, Mattis admitted. “We need a budget and we need budget predictability,” he said, “if we're to sustain our military's primacy.”

And that is precisely the point. If the United States remains committed to primacy, we must significantly increase the amount of money available to execute it. But that is unlikely to occur.

The reason why is simple to explain, but devilishly difficult to fix. The impasse between deficit hawks, defense hawks, and domestic spending advocates has existed for at least eight years, and is nowhere close to being resolved, as the shutdown fight reveals. Pentagon officials might have addressed this problem going forward by reducing the number of missions, since the level of resources are beyond their control.

But they didn’t do that. Instead, they pinned their hopes on someone else solving the budget problem.

How—or even whether—that will happen remains unclear. More debt doesn’t seem the best answer. Mattis spoke of putting America’s “fiscal house in order.” It was crucial to “restore America’s economic viability,” he explained, “because no nation in history has maintained its military power” if it wasn’t “economically viable.”

Restoring America’s fiscal health presumably does not entail today’s leaders spending whatever they want, financed on the backs of future generations, according to imagined or hoped-for revenues that may never materialize, or cuts in other programs that may never occur.

The Defense Department is not responsible for the rest of the government’s dysfunction. Nor is the agency that Mattis heads the sole—or even primary—cause of America’s fiscal distress. But the $5.6 trillion spent, so far, in the wars fought since 9/11 surely hasn’t helped.

And that is the other problem with the National Defense Strategy. It emphasizes the need to challenge Russia and China, rogue states like North Korea and Iran and nonstate actors like ISIS. It also stresses the importance of diplomacy. But there is a wide disparity between the NDS and the Trump administration’s conduct in year one.

For example, the very first paragraph of the unclassified summary of the NDS stresses the importance of “reinforcing America’s traditional tools of diplomacy” and explains that the department’s primary object is to provide “military options to ensure the President and our diplomats negotiate from a position of strength.” Increasingly, however, we don’t have diplomats doing negotiations of any kind.

Mattis sees the military’s primary value as deterring those who might challenge us. As a practical matter, however, the vastly capable military that Mattis now leads seems better at getting into fights than avoiding them. And that doesn’t seem to be changing: Donald Trump has expanded nearly all of the wars that he inherited, and has added a few new ones.

In short, the National Defense Strategy is only part of the wider National Security Strategy, but the Trump administration’s budget priorities, and the president’s rhetoric, imply that it is the only part that matters.