Why Are More Troops Headed To Iraq? 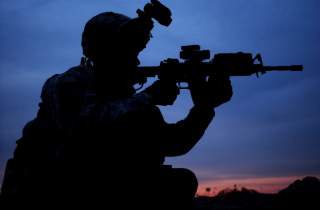 Secretary of Defense Ash Carter announced Monday that the president had authorized the deployment of 560 U.S. troops to Iraq to aid in the looming assault to retake the city of Mosul. While it is possible these troops will provide tactical utility for Iraqi forces, the move exposes the Administration’s lack of strategic understanding and Congress’s continued abdication of its constitutional responsibilities.

At the tactical level, there is no doubt the Iraqi military will benefit from the U.S. troops. A Department of Defense statement said the U.S. service members “will provide a range of support for Iraqi Security Forces (ISF), including infrastructure and logistical capabilities at the airfield near Qayyarah [close to Mosul].”

What should matter to Washington, however, isn’t so much the tactical potential as it is strategic outcomes. Here is where the administration’s approach to Iraq comes up well short.

In recent months the ISF has made notable tactical progress in recapturing ISIS-held territory, including a number of important cities. Mosul is the next target and is also by far the largest and most important terrain. ISIS may well fight fiercely to defend its so-called “capital” in Iraq, but Mosul’s loss will not signal the end of the organization. It might actually increase the risk to the American homeland of ISIS-inspired terror attacks.

A recent article in Foreign Policy argued that while the United States and coalitions might be winning battles against ISIS in Iraq and Syria, it is losing everywhere else. The authors bluntly warned that the United States “will fail to defeat the Islamic State and protect the homeland if it does not reframe its strategy to contend with the Islamic State globally, rather than focusing on tactical successes in Iraq and Syria.”

The explosion of attacks in Paris, Istanbul, Baghdad, Orlando and other cities—along with an expanding presence in other areas of the world like Afghanistan, Yemen and North Africa—show that even if we rout ISIS out of Iraq and Syria at great cost, the threat of more terror strikes on U.S. territory increases.

Shorn of territory to defend, cities to administer and municipal salaries to pay, the terrorists will go underground like Al Qaeda and focus more of their resources on planning and executing global terror strikes. It is time Washington stops expending substantial resources on the tactical fight and start putting far more emphasis on strategic operations.

Meanwhile, Congress has continued its long abdication of its responsibility to debate matters of war and peace. As the legislature gave a blank check to the president with the authorization to use military force days after 9/11, they continue to give the administration free reign by failing to hold a single substantive debate on whether U.S. forces should be used in Iraq. They have not required the president to explain any of the critical actions.

For example, in its statement announcing the deployment of an additional 560 troops, the Pentagon said only what the troops would be doing. “The additional troops will provide a range of support for Iraqi Security Forces, including infrastructure and logistical capabilities at the airfield near Qayyarah . . . [They] will also continue to provide enabler support to Kurdish Peshmerga as they converge on Mosul from Iraq's north.” Wholly lacking was any explanation of why they’re sending the military there.

What objectives are the troops expected to accomplish? How long are they expected to fight, or how does this tactical mission fit into the president’s larger effort to achieve strategic benefit for the United States? If the mission to retake Mosul fails, what are the consequences? If it succeeds, what are the potential benefits? The administration hasn’t volunteered answers. It’s not hard to understand why—they don’t know.

It is Congress’s obligation to demand satisfactory answers. Yet as the administration continues to founder strategically, senators and representatives continue to shirk their responsibilities. The result is increasing terror threat to the nation and the continued deterioration of the checks and balances on the government.

The biggest losers in this dysfunction continue to be the American people. Possibly our only hope in correcting this poor state of affairs is if the people rediscover their own checks and balances via the vote in November. If not, I fear only the pain of what should have been avoidable new terror attacks will force the issue. Pain can do at much higher cost what could have been accomplished earlier with the application of humility, wisdom and prudence.