Why Would America Deploy Troops to Syria If ISIS Is Already in a Death Spiral? 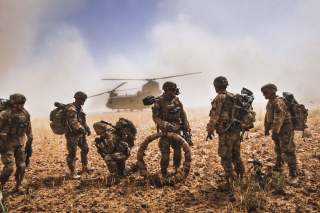 Numerous sources reported earlier this week that the Pentagon presented the president options for defeating the Islamic State (ISIS) by sending conventional combat troops into Syria. The president should reject such advice out of hand. The introduction of American combat troops into Syria would add substantial strategic risk to the United States while offering virtually no upside.

Unnamed Pentagon sources revealed to CNN on Wednesday, “It’s possible that you may see conventional forces hit the ground in Syria for some period of time.” Pentagon spokesman Jeff Davis later admitted that the Pentagon was “considering a number of measures to accelerate the campaign as part of that review, but no decisions have been made.” Let us hope that no one in the White House will act on this advice. Such a course of action is riddled with risks, some of which could greatly harm U.S. national security.

Damascus’s enthusiastic reception of this news does not bode well. Syrian dictator Bashar al-Assad said, “We agree about this priority”—that is, sending U.S. troops to Syria to attack ISIS. “That’s our position in Syria, the priority is to fight terrorism. . . . [Such action] must be through the Syrian government,” Assad added. He offered to help U.S. troops succeed: “We own this country as Syrians, nobody else, nobody would understand it like us.” The idea of American troops fighting and dying for a mission that will ultimately benefit Bashar al-Assad is not a policy the White House should adopt.

As has become almost commonplace in the Pentagon in recent years, such a plan gives little or no consideration to the many substantive questions that have to be answered before such a plan should even be offered as a viable option.

In the event U.S. troops make the difference and free Raqqa from ISIS control, what happens next? The United States would clearly not administer the city afterwards. To whom would Washington give control of the city? What would the United States do if Syria, Russia and Iran then attacked the city and took control? Would it retaliate against Russian, Iranian or Syrian troops and risk going to war over Raqqa? Secretary of Defense James Mattis said on Thursday that there would be no military cooperation with Russia in Syria. Would America then be willing to risk clashes between U.S. and Russian forces?

How would Washington support American troops in land-locked and hostile Syria? Conducting such operations would require setting up enormous logistical infrastructure and support bases in the region, and all supplies would have to be sent in by air—an expensive and risky endeavor. What would we do if support planes were knocked out by ISIS or other Islamist rebels? Russia would be immediately suspected of giving the rebels modern anti-air weapons—like we did against them in the Soviet-Afghan war of the 1980s. What if an investigation revealed that, yes, the Russians did arm the rebels? Yet again, the hard question has to be asked: would the United States be willing to risk a war with a major power over a few transport planes being knocked out in support of a city America would not keep?

It is critical to understand that even if the United States undertook the enormous risk of destroying ISIS in Raqqa and succeeded, the larger danger of ISIS-supported terrorism would not recede. Arguably, it would increase, as the group would no longer need to concern itself with holding territory; it could instead redirect its resources and efforts to terrorist attacks against U.S. interests and, if possible, on the U.S. homeland.

Any national military operation the White House orders must demonstrate a reasonable chance of achieving a strategic objective. The Pentagon may be capable of accomplishing a given tactical mission—capturing Raqqa—but if the risks to the nation inherent in the conduct of that mission are greater than the threat the operation is meant to cure, the mission must be abandoned. The risks this mission entails make it a virtual certainty that the outcome for the United States would fall somewhere between bad and disastrous. There is no realistic upside.

Equally important, there is no legal authorization for such military action on the territory of a sovereign nation. The Obama administration used the Authorization for Use of Military Force (AUMF), passed by Congress in the wake of 9/11, for virtually every military adventure it wanted, even when such actions weren’t remotely associated with the provisions of the law.

The 2001 AUMF explicitly authorizes—and limits—the president to “use all necessary and appropriate force against those nations, organizations, or persons he determines planned, authorized, committed, or aided the terrorist attacks that occurred on September 11, 2001.” ISIS didn’t exist in 2001, had nothing to do with 9/11, and thus cannot be attacked under that authorization. The president ought to reject the Pentagon’s suggestions to send troops to Syria based on the likelihood of mission failure. But so too must Congress demand that any future action against ISIS, especially in Syria, be publicly debated and, if deemed appropriate, pass a new, specific and limited AUMF.

Direct U.S. military action simply isn’t necessary. ISIS is already losing territory and is a dead man walking. In Mosul, the Iraqi armed forces and associated militia are slowly purging the terrorists from the city, and though it will take longer than they projected, the coalition will eventually succeed. Already upwards of seventy thousand civilians have returned to the liberated sections of western Mosul. The Kurdish and Arab Syrian Democratic Forces have been progressively tightening the noose around ISIS in Raqqa, slowly depriving it of territory and exacting an accelerating death toll. Given enough time, they too will eventually drive ISIS out.

The administration should focus on the ultimate objective of defeating ISIS, recognize that the terrorists are being squeezed in a death spiral and demonstrate strategic patience. The boa constrictor is doing its job of strangling the Islamic State and if allowed to finish the job, ISIS will be ejected from Raqqa and Mosul, eventually losing the territory it holds elsewhere in the region. What the president must avoid at all costs is risking a major war with potent conventional opponents over something of no strategic value to the country.