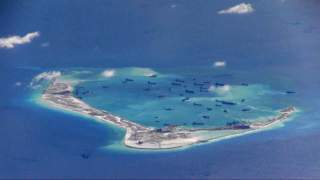 Beijing is relentless in its pursuit of territory that it feels once was a part of the Middle Kingdom. A lack of coordination in resisting this irredentist activity is having consequences, for ignoring it merely delays – and worsens – the problem.

For example, if the law-abiding nations of the world had taken effective action in the South China Sea when China reemphasized its Nine Dash Line claims some years ago, we would not be faced with the outposts China has established on islets in the area – some replete with landing strips and associated defensive equipment.

While it is building ever more islands in the territory its claims within the South China Sea, China is not ignoring the East China Sea. Just recently, Beijing flew warplanes into both the Korean Air Defense Identification Zone (ADIZ) and the Japanese ADIZ there.

China is escalating its forays into the seas around it, probing for reactions by others in the waters bearing its name. But not all Beijing’s incursions are military. Chinese fishing boats routinely violate South Korea’s waters – one fresh incident requiring Seoul’s coast guard to fire nearly 250 warning shots to move the intruding vessels out of the area.

Beijing has even taken to threatening Taipei with invasion should American warships patrol the area and visit Taiwan in a show of support for that island nation.

In 2014, then-US president Obama stated that Senkaku Islands (known as the Diaoyus in China) are covered by the US-Japan Security Treaty, thus obligating Washington to ride to Tokyo’s rescue if Beijing makes any move to occupy the rocks by force.

The number of times that Japan scrambled fighters in response to incursions by China’s aircraft tallied 842 in 2016 alone, averaging more than two a day.

Such responses to incursions require a great commitment of time and effort, but present alliances notwithstanding, there is no single strategy or vision among regional players in East Asia on how to properly deal with Beijing’s aggression.

Part of that is due to the way allied alliances have been established. All mutual assistance agreements are bilateral pacts between the US and its regional allies South Korea, Japan, and Taiwan. Not only does this place an extraordinary burden on Washington, it ignores the need for a collaborative approach to dealing with China.

Regarding the South China Sea, many of the nations in Southeast Asia have quietly acquiesced to China’s claim to the waters within its Nine Dash Line. They simply do not have the military wherewithal to stand up to Beijing. It has not helped that the US, despite its insistence on Freedom of Navigation in all areas of the world, has conducted its own naval and aerial sorties in the disputed areas of the South China Sea only infrequently.

A recent article pointed out the need to stand up to Chinese aggression. Now tension is high enough that Tokyo and Beijing are opening a hot-line channel of communication to avoid military action over the islands. But this is merely China giving throat to honeyed words: Apologies will follow incursions that, upon reflection, were clearly intended. Thus, any regret is disingenuous at best.

Weaker nations in the region need to form a military alliance, so that in unity they acquire the means to face down Beijing. Unfortunately, that was tried once before, but to no avail. Modeled after the North Atlantic Treaty Organization (NATO), the Southeast Asia Treaty Organization (SEATO) was intended to fight the spread of communism in Southeast Asia. It failed miserably due to conflicts among its members, and it disintegrated after little more than two decades due to a lack of unity and utility.

Beijing seeks to reclaim its glory days in which the world it knew orbited China, as the name Middle Kingdom implies. China needs to meet its Copernicus in the form of a Defense Coalition of East Asian Nations (DCEAN), necessarily underwritten by American foreign policy and its nuclear umbrella. Something like SEATO but with teeth, it would rely primarily upon the military assets and the political will of the regional member states – backed by Washington’s support if and when needed.

Geographic distance and differing regional and national interests are obstacles that prevent such a coalition from forming. While Europe was able to overcome similar difficulties and differences in establishing NATO, there are conditions unique to Northeast Asia that preclude that from occurring.

To begin, Tokyo has baggage from World War II that has not been permanently shed. Though several previous Japanese administrations have apologized for the country’s brutish behavior during the war, the equivocating and posturing of Tokyo’s current prime minister brings the historical enmity between Japan and its neighbors back to the fore.

Moreover, the new South Korean administration is charting an independent geopolitical course and has pointedly declined to join any military alliance involving Japan and the US even though there is a great need for a collaborative approach in dealing with North Korea as well as China. Unity in the face of Chinese aggression is further complicated by the fact that Seoul and Beijing are drawing closer economically.