These are the Most Important Tactics Implemented During the Gulf War 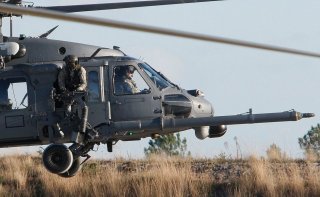 Here’s What You Need to Remember: On the 30th Anniversary of the 1991 Gulf War, many are likely to reflect upon the specifics of the military campaign with a particular mind to how it marked a historic turning point, forever reshaping the paradigm for air warfare.

The U.S. Air Force-led destruction of Iraqi forces in the Gulf War pioneered what’s known as “effects-based warfare,” a strategy intended to use precision airpower strikes to disable an enemy without necessarily destroying the infrastructure of the attacked country.

Inspired by Air Power theorist and former Air Force Col. John Warden, Effects Based Warfare rests upon a strategic “rings” concept wherein specific tactical targets are taken out to achieve a battlefield “effect,” such as crippling supply lines, command and control, headquarters and other high-value targets. This is done using precision attack from the air, to avoid massive damage to the area under attack.

Unlike Vietnam War carpet bombing or World War II bombardments of entire cities, Effects Based Warfare, as manifest in the Gulf War, segments and specifies certain desired target areas intended to render an enemy inoperable. Command and control headquarters, according to the airpower theory, is at the center of the strategic ring’s inner circle with other enemy assets in the outer rings. Effects Based Warfare has inspired the use of precision air attacks and has informed years of air attack tactics, including things like the bombing of runways and highways to prevent enemies from being able to transit forces for the attack. Fielded force concentrations can also be targeted with Effects Based Warfare, yet that is less crucial than breaking the ability and will of an enemy to fight by destroying command and control, supply lines, communications, equipment or weapons assets as well as denying an enemy the ability to use roads, bridges and runways.

The successful application of these kinds of tactics in the Gulf War, which first established air superiority before using precision-guided air-dropped bombs to attack targets, provided the strategic foundation for the Operation Iraqi Freedom “shock and awe” campaign in Iraq in 2003.

“There once was a time when we thought we had to go into the layers sequentially where we had to start at the out layers and peel it back to get into the inner layers. Desert Storm indicated that this is not the case. The first ordnance to hit the ground was at the inner layer,” former Maj. Gen. Paul Johnson, (now retired) Director of Requirements for the Deputy Chief of Staff for Strategic Plans and Requirements, told The National interest in a special interview five years ago in 2016 at the twenty-fifth anniversary of the Gulf War. Johnson flew A-10 attack missions during the Gulf War.