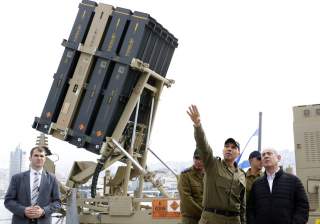 The U.S. Army’s plan to buy Iron Dome as an intermediate-range counter-artillery system has been scrapped as of March 7, 2020, making it one of the shorter-lived acquisition programs in recent memory. The Army initially planned to buy Iron Domes as an interim counter-artillery system in August 2019, until their own launchers were ready for service. But significant issues and a rearrangement of Army priorities have caused the purchase to be scrubbed.

There are two primary reported reasons for this. One, given by Army acquisitions chief Bruce Jette, is that Iron Dome does not have enough capability against cruise missiles. The other, given by Army Futures Command head Mike Murray, is that Iron Dome cannot be effectively integrated into American air defense networks, so the batteries would effectively be standalone; unable to share data about targets with other air defense systems.

Both these reasons have significant merits. The initial decision to pursue Iron Dome was born out of the Indirect Fires Protection Capability Increment 2 (IFPC Inc 2) program. IFPC aimed to develop or buy a static system that was capable of protecting Army troops from cruise missiles, artillery, and air threats. The Army was developing their own Multi-Mission Launcher, which could fire variants of the AIM-9X, small quadpacked miniature hit-to-kill missiles, or even Iron Dome rockets for this purpose, but the MML was deemed to be not ready for service when the Iron Dome purchase was pushed through by Congress in 2019.

Congress wanted Iron Dome as an interim capability until MML and other SHORAD assets such as lasers were developed by the Army, with a senator saying “I don’t want to see the perfect be the enemy of the good.” Recent rocket attacks such as those on Camp Taji have underscored the need for coverage against rocket fire. But the two sets of Iron Dome purchased by the Army are still not ready for deployment and are not expected to be until later this year. Camp Taji also lacked any form of counter rocket protection offered by earlier systems, so even if Iron Dome was ready, it’s unlikely that it would have been deployed there. But Congress, due to its funding of Iron Dome for Israel (to the tune of $1.5 billion), may have pressured the Army to adopt Iron Dome despite it not being the best solution for the IFPC capability gap. The Army’s current rejection of the Iron Dome system could be simply seen as a way for the Army to cut what it sees as a pork-barrel purchase in its FY2021 budget request.

After all, the cruise missile portion of the IFPC program is likely to be far more relevant than counter rocket or artillery capabilities. In a peer or near-peer conflict, almost any artillery attack would be one of almost total saturation, and Iron Dome interceptors would be depleted near instantly and at great cost trying to stop them. Stopping cruise missiles is a far more needed capability, since it’s far more expensive to launch a saturation attack with cruise missiles, and a simple deterrent capability.

Israel’s reluctance to provide source code and other technical details about the Iron Dome system have also contributed significantly to the Army’s reluctance to keep funding the project. While Iron Dome is perfectly effective within the Israeli radar and datalink ecosystem, in U.S. Army service it would be expected to work with current U.S. Army battlefield radars, also used for Patriot and other systems (as well as the new Sentinel radar). The lack of source code and technical models prevent the Army from judging how effective Iron Dome can integrate with U.S. integrated air defense system. This is ironic, given that United States shared source code with Israel on the F-35 project, allowing Israel to integrate their own air-to-air missiles and air networks onto the fighter and partially funded its development.