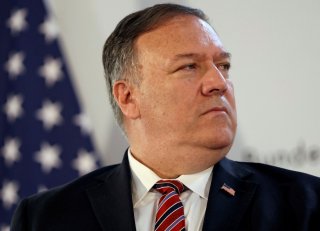 The only charitable explanation of Secretary of State Mike Pompeo’s crusading call for democracies to unite against China was that he was being rhetorical. Two key sentences were prominent in that barnstorming speech at the Nixon Library. “The challenge of China demands exertion, energy from democracies,” Pompeo said, “those in Europe, those in Africa, those in South America, and especially those in the Indo-Pacific region.” Pausing for effect, he cleared the concept further in case anyone had any doubts. “Maybe it’s time for a new grouping of like-minded nations, a new alliance of democracies.”

This is not new. Lately, Britain has moved forward with a plan to create an alliance of democracies. Australia, likewise chastened after severe bullying by China, wants to bring life back into the Quadrilateral Security Dialogue. All these ideas are predicated on two conditions: one, there needs to be a balancing coalition, and two, the balancing coalition needs to be democratic. But the elephant in the room, so to speak, is the idea that India should be brought in in this balancing coalition.

India is, to put it mildly, not a liberal democracy. Nothing wrong with that—democracies need not be necessarily liberal. In fact, conservative and majoritarian democracies are also democracies, show greater internal coherence and Spartan discipline, and are often very good military allies. Compare and consider, for example, the NATO contribution and pro-U.S. views in Germany and Poland. But what remains a fact is that India is too big and powerful to be coerced towards social liberalism, even incrementally. America lacks the leverage to do that, both financially and militarily, and pressure to do that would result in a major backlash in a country which has historic issues with Western interference. The social trends within India are also moving towards more majoritarianism. While President Donald Trump (and indeed, U.S. conservatives) might not have a problem with that, increasingly woke future Democratic administrations will not be that reliable. Indian strategists know this, and can see the dysfunction and ideological partisanship in Washington.

Second, how much India actually wants to join a “democratic” crusade is still questionable. Yes, there have been border clashes with China, and India is indeed debating about leaning towards inviting Australia alongside Japan and the United States for naval exercises, in a not-so-subtle hint to China. But hedging is in Indian strategic blood. For what it is worth, India is still a member of the Shanghai Cooperation Organization led by China, as well as nominally in the Non-Aligned Movement—not acts of a nuclear great power feeling threatened. If India was genuinely seeking re-alignment with the Western democracies, it wouldn’t be aligned with Central Asian autocracies, for a start.

Third, and the most important point, is that India is currently in a military standoff with China. To bring an active flare-up zone in a potential alliance system is a major strategic folly. It is the same conundrum that stopped Ukraine and Georgia’s ascension into NATO, and rightly so. To have a member state in a potential alliance, would mean to commit to their aid in extremis. Unfortunately, India knows that it is the only land power with an actual border with China, and unlikely though it might be due to nuclear deterrence, during war India would have to stand alone against China.

Incidentally, Americans also are far more realistic about taking sides in the eventuality of conflict. Surveys suggest that “63.6% of responders would have the US support neither India nor China if they were to engage in military conflict with each other, compared to 60.6% regarding economic conflict with each other.” One might be tempted to draw the conclusion that average Americans instinctively understand the concept of buck-passing and bloodletting (the strategy to let two major belligerent powers bleed each other) far better than the majority of their elected political leaders. If a similar poll is conducted in India, the chances of a similar outcome are quite high.

Nothing in this is to suggest that India wouldn’t align with the United States and the West broadly. It is a nuclear power, the sixth-largest economy by some count, and an English-speaking country with a broadly British-influenced elite academic culture. There are major areas of cooperation, from technology to research, to intelligence and force interoperability. India also provides America, Australia, and Britain a ready market and supply chain if the Anglosphere is truly serious about breaking some China. But it will unlikely be a part of a democratic crusading coalition to “induce change,” as Pompeo desires. In fact, too many of such characterizations might have a reverse effect.

Pompeo is, by all measures, a clever man with further political ambitions, charged with a genuinely difficult task of providing a semblance of coherence to the epoch-defining U.S. grand strategy. The other explanation, that he is a true believer in crusading zeal, and that he believes foreign policy as a Rowlingesque good versus evil struggle, is too grim to contemplate. It is also ahistorical and would be news to NATO, in various times aligned with Francoist Spain, authoritarian Greece, and semi-Islamist Turkey; not to mention other controversial American allies in Saudi Arabia and Pakistan. If he truly believes that China is a peer rival to be balanced, he should get back to the basics, and read what one of his intellectual predecessors, Jeane Kirkpatrick wrote about alliances. Alignments need not have forced ideological conformity or character, and Washington should focus simply on strategic partners and ignore utopian temptations.