What's Behind the Rumor that Ex-Australian PM Could Be Boris Johnson's Pick for Trade Envoy? 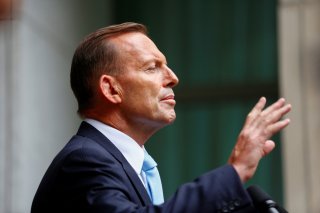 The rumour that Tony Abbott, the controversial former prime minister of Australia, is being lined up as a trade envoy for the UK was a summer news story few saw coming.

Appearing before the House of Commons Foreign Affairs Committee, Abbott confirmed that he has had some discussions with members of the British government. However, while he said he is “more than happy to help”, he insisted that nothing is official “as yet”.

Abbott is notorious in Australia for his “ocker” manner and outlook. He is regularly photographed in a pair of “budgie smugglers” with surfboard under arm at his beloved Queenscliff beach in Manly, Sydney.

He is on record with statements concerning indigenous Australians, the environment and the role of women in society that would make the most hardened miner in a local pub wince at the insensitivity. Not many public figures embraced the label “dinosaur”, but even his supporters recognise that Abbott is an unreconstructed example of Australian chauvinist manhood.

What on Earth, then, could drive the British prime minister, Boris Johnson, and his advisers to reach out to someone whose toxicity matches Donald Trump in many quarters?

Opinions vary. Some insist that with the UK in dire need of expertise in its trade negotiations, it makes perfect sense to employ someone highly familiar with the Asia-Pacific economic terrain. The only problem with this hypothesis is that even according to his close confidants Abbott had very little to do with trade during his term of office, or indeed at any time before or after.

Others smell something more suspicious. Abbott is of course an international figure who has moved in influential circles and has strong connections, not least with the conservative establishment in the US. He moves in high places among the policy wonks, thinktanks and institutes with lavish funds at their disposal to entertain friends and allies. Could this appointment reflect the fact that Abbott is a useful ally in these circles?

Surely there’s a more obvious explanation. This is that Abbott stands symbolically for a set of values and a political orientation which the Johnson government wishes to endorse and align itself with.

In terms of values, Abbott represents a US style of conservatism based on a belief in “family values”, patriotism and the flag. But within that broad appellation we can also identify a distinctively neoconservative stance in terms of the assertion of “western” values and the superiority of the European inheritance, including but not limited to the value of colonialism and imperialism, and what international relations scholars term “offensive realism”. This is the view that, in a world of competing ideologies, military conflicts are inevitable.

In short, Abbott’s world view is not at all dissimilar to that of Steve Bannon, the controversial architect of the first phase of Trump’s administration. Like Bannon, Abbott is an unapologetic culture warrior. He believes that western societies have lost their way and lost confidence in themselves. He thinks the west needs to refind its mojo and reassert the superiority of its values and way of life, particularly in relation to the Islamic world and China.

All this implies a kind of permanent war against the forces of the left – such as antifa, the left-liberal establishment of universities and the media and the apologists for identity politics, multiculturalism and cosmopolitanism. It also means committing to permanent conflict externally, on the hostile terrain that is global politics. It is a hawkish, unfashionable view of the world with metropolitan elites, but one virulently supported in Australia by its leading newspaper, the Australian, and by the Rupert Murdoch-owned Sky News.

The question remains then, what possible use are all these associations to Johnson? He has strived to confect an image of harmless amiability with a “big tent” politics. He has sought to be a lot of different things to a lot of different groups in order to secure the hallowed middle ground of British electoral politics.

The answer is surely that “culture war” of a kind articulated quite crudely by Abbott and Trump but also in Europe by the likes of France’s Marine Le Pen, the Netherlands’ Geert Wilders, Italy’s Matteo Salvini and Hungary’s Viktor Orban has shown itself to be popular with voters who don’t normally vote for the right. The theme is a great way to draw in working class and precariously employed people who are looking for stronger “authority” figures to deal with what they perceive to be increasingly lawless societies surrendering themselves to immigrants and the multicultural left.

It also serves to insulate a regime from the vagaries of public policy outcomes, of which COVID-19 is the most recent and obvious example. The pandemic is a classic no-win scenario for most governments. Play too lax and one gets blamed for too many deaths. Play it too hard and one suffers the economic consequences of lockdown. A culture war, on the other hand, presents a win-win for conservative regimes across the world looking to maintain power.

Hiring Abbott will not inoculate the UK government against policy failure, as such. But it sends a strong signal to Tory MPs and the wider public that this government wants to be judged less on the flimflam of policy outcomes, over which it has uncertain control, and more on the defence of a certain outlook and a certain way of life that it hopes will chime with the electorate.