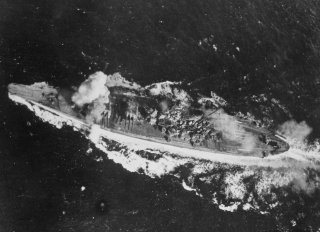 Key point: The Japanese underestimated American power and resilience, as they had all through the war, and overestimated their own resolve.

In the distance, they could see the jagged flashes of lightning, an incoming squall in the dark. Just before the rain arrived, so did St. Elmo’s Fire, and the gun barrels and radio antennas on the PT boats crackled with blue sparks and streamers of static electricity.

Then there was another lightning flash, and suddenly Lieutenant (j.g.) Terry Chambers, the executive officer of PT-491 saw them—a column of seven Japanese warships advancing in the dark, headed for Surigao Strait and the waiting U.S. Seventh Fleet. It was the extremely early morning of October 25, 1944, and two battleships and a heavy cruiser of the Imperial Japanese Navy were steaming toward what would become one of the most one-sided battles in naval history, and the last duel between battleships of the line.

The Battle of Surigao Strait was a major portion of the titanic Battle of Leyte Gulf, the largest and last major naval battle ever fought, an epic engagement that saw the use of every type of naval warfare except the mine.

The Leyte Gulf battle began with the American decision on July 27, 1944, to target the Philippines instead of Formosa as their next invasion site. General Douglas MacArthur would redeem his pledge to return to the Philippines. The initial objective was the invasion of the island of Leyte to secure air and sea bases for the next stages: seizing Mindoro and the climactic assault on the main island of Luzon.

Sho-1: The Imperial Navy Strikes Back

The 3rd Fleet was the offensive arm of the invasion, with nine fleet carriers, eight light carriers, and six fast battleships at its heart. The 7th Fleet was the amphibious force, with more than 100 transports and other vessels (including the British minelayer HMS Ariadne), protected by a swarm of cruisers, destroyers, and escort carriers for close air support, backed by six old battleships configured for shore bombardment, in a Fire Support Force, headed by Rear Admiral Jesse B. Oldendorf, flying his flag in the heavy cruiser USS Louisville. Among his ships were the Australian cruiser HMAS Shropshire and the destroyer HMAS Arunta. A-day for the invasion was to be October 20, 1944.

The invaders were not spotted by the Japanese until October 17, when the whole American armada appeared at the mouth of the Gulf of Leyte. When they did so, Admiral Soemu Toyoda, who headed the Imperial Japanese Navy, ordered their long-planned response, Victory Operation One, or Sho-1, into operation.

Sho-1 was one of four plans the Japanese had prepared in anticipation of America’s next offensive move, and they all called for the same reaction: the bulk of the Imperial Japanese Navy steaming forth to attack and destroy the U.S. fleet, regardless of losses to themselves.

Sho-1 was like most Imperial Japanese Navy plans of World War II: a decoy force would lure the Americans in one direction, while the real punch would come from other directions in a complex series of coordinated movements. This time, the decoy force was Japan’s surviving aircraft carriers, under Vice Admiral Jisaburo Ozawa, steaming down from the home islands. With barely 100 planes between them, these carriers lacked offensive punch, but the Japanese believed the aggressive Halsey would race after them with his entire 3rd Fleet.

While Halsey was drawn off, the powerful battleships and heavy cruisers of the Imperial Navy, mostly based at Lingga Roads near Singapore and the Borneo fuel stocks, would strike east and ravage the 7th Fleet’s amphibious forces while they lay in Leyte Gulf. The surface ships would pound the 7th Fleet to death with torpedoes and shells, isolating the American invaders on shore. The combination of a trapped army in the Philippines and a smashed navy in the Pacific might at least buy Japan time, or even persuade America to make peace.

The Task Forces of Kurita and Nishimura

The battlewagons at Lingga were commanded by Vice Admiral Takeo Kurita and consisted of a powerful force. They were headed by two immense dreadnoughts, the Yamato and Musashi, sister ships that packed the heaviest armament ever loaded on a battleship, 18.1-inch guns. They were supported by five more dreadnoughts and a screen of cruisers and destroyers, all of which brandished the legendary Type 95 Long Lance torpedo, one of the best in the world. The Imperial Japanese Navy may have been worn down by hard war, but it was still a powerful force with highly skilled sailors and officers well trained in night fighting.

Toyoda and Kurita planned a pincer attack on Leyte Gulf with their battleships. Kurita would take one force, with five battleships, including Yamato and Musashi, through the San Bernardino Strait to hit Leyte Gulf from the north. A second force, under Vice Admiral Shoji Nishimura, a veteran seadog, would steam through the Surigao Strait and smash into Leyte Gulf from the south, the anvil to Kurita’s hammer, just before dawn.A Naval War College graduate of 1911, Nishimura had commanded destroyers in the invasion of the Philippines and the Dutch East Indies in 1941. His son, Teiji Nishimura, a naval aviator, had been killed in the former invasion. In 1942, Nishimura commanded cruisers in the grueling struggle for Guadalcanal, suffering some bad luck but displaying skillful planning and “lion-like fury” in battle.On September 10, 1944, Nishimura was given command of Battleship Division 2, which consisted of the dreadnoughts Fuso and Yamashiro and their destroyer escorts. The two battlewagons, sister ships, dated back to 1911 and were known throughout the fleet for their tall pagoda masts—44 meters above the waterline—and for having sat out most of the war in home waters, mostly as training vessels. The emperor’s brother had served on Fuso twice.

These battleships had never fired their guns in anger. They were the first battleships built with Japanese engines and guns, the most powerful dreadnoughts in the world at the time. But Fuso and Yamashiro were slow and outdated by 1944’s standards, armed with six 14-inch guns each. They were sister ships, but not twins, and regarded as the “ugliest ships in the Imperial Navy.” Both had crews of about 1,600 officers and men. Yamashiro flew Nishimura’s flag.

To support Nishimura’s force would be four destroyers, Michishio, Yamagumo, Asagumo, and Shigure, and a veteran heavy cruiser, the Mogami.

Studying his war maps, Toyoda did not think that Nishimura had quite enough punch, so he added a second task force to the southern wing, under Vice Admiral Kiyohide Shima, swinging down from the Pescadore Islands off Formosa. The second striking force would consist of the heavy cruisers Nachiand Ashigara, both veteran ships; the light cruiser Abukuma, which had escorted Japan’s carriers to Pearl Harbor; and four destroyers, Shiranuhi, Kasumi, Ushio, and Akebono.

Neither force commander coordinated his movements with the other—nor were any orders given to do so. Neither commander was fully briefed about the other’s operations. As far as historians could tell, Nishimura was to clear a path with his battleships so that the cruisers and destroyers behind could finish off the transports with torpedoes. Nishimura’s group was to be called the Third Section, while Shima’s group was the Second Striking Force.

With the Americans moving on Leyte, the Japanese launched their intricate countermoves. Ozawa sortied from Japan, Shima from the Pescadores, and Kurita and Nishimura from Lingga Roads, headed for a refueling stop at Brunei.

On October 20, the Americans invaded Leyte with massive power. Landings began at 10 am, and General MacArthur strode grimly ashore four hours later, making his famous “I have returned!” speech from the invasion beach amid a steady downpour.

Spotted in the Sulu Sea

The next day, Kurita summoned his senior officers to a conference on his flagship, the heavy cruiser Atago. Kurita explained his plans to the assembled admirals, including the decision to split off Nishimura’s force to head for the Surigao Strait. If the complex ship movements worked, the two forces would slam into the American 7th Fleet just before dawn on October 25. The next morning, the Imperial Japanese Navy’s battle line headed out for sea for the very last time, with Kurita and his five dreadnoughts steaming north to the Sibuyan Sea and the San Bernardino Strait.

At 3:30 pm, Nishimura’s ships put to sea. Shima’s ships were already en route. All through the afternoon and night, the two forces steamed along unimpeded into the Sulu Sea. Not so Kurita’s force, which was spotted by two American submarines, which slapped torpedoes into three of Kurita’s cruisers, sinking two—including his flagship Atago—and damaging the third. Kurita shifted his flag to the battleship Yamato and sailed on.