Why Is Netanyahu Praising Obama? 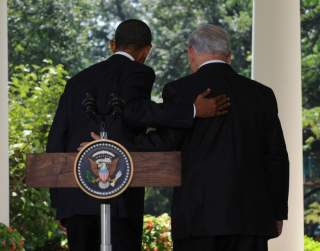 In a revealing interview with Israeli Prime Minister Benjamin Netanyahu, Jeffrey Goldberg extracts some unusual praise from him for President Obama. Despite the frosty relationship between the two leaders, Netanyahu apparently thinks that Obama has had some real success in Syria. He tells Goldberg:

It’s not complete yet. We are concerned that they may not have declared all of their capacity. But what has been removed has been removed. We’re talking about 90 percent. We appreciate the effort that has been made and the results that have been achieved.

He's right. The fact remains that the destruction of chemical weapons in Syria was a good thing. And it provides a reminder that Israel remains a true practitioner of realpolitik--less concerned about the kind of humanitarian intervention that Obama had been contemplating than the effect of events in Syria on its own security.

But how realistic is Netanyahu being about the Palestinian conundrum? Goldberg rather deftly pins Netanyahu down, asking him why he doesn't announce a settlement freeze to put the "onus" for peace on the Palestinians. Netanyahu responds with a mixture of bluff and bombast. For one thing, he claims that "No new settlements have been built since the time I was first prime minister, which was 1996." But existing ones keep getting expanded, encroaching on more Palestinian territory so as to make the establishment of a contiguous state a geographic nonstarter.

There's more. Netanyahu reiterates to Goldberg a point that he and others have made ad nauseam:  "The real issue was and remains opposition to the Jewish state. That’s the demon that they have to confront, just as we’ve confronted the demon of a greater Israel. Not easy, but we did it." But once again, the question is where did they do it? All evidence suggests that the dream of a greater Israel remains alive and well, particularly now that the peace process, such as it was, appears to be in a permanent state of suspended animation.

Netanyahu notes that he doesn't want a binational state. It would seem that unilateral Israeli moves are the most likely prospect. By the end of the interview, Netanyahu tries to display something of a ho-hum attitude to the whole issue, emphasizing Israel's growing relations with China and Japan. It sounds as though he wants to make his own pivot to Asia. The coming years may be a test of how successfully Israel can derogate the Palestinian issue to the back burner of international relations. Now that Secretary of State John Kerry's efforts have gone nowhere, it will be up to the Israelis and Palestinians to decide whether or not they want to attempt to reach an accommodation or whether each side actually prefers the status quo.