Why the World's Number Two Economy Is Headed Towards Big Trouble 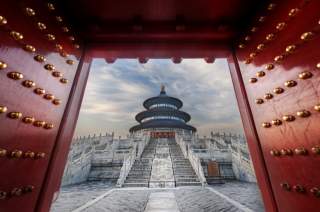 For roughly three decades, the Chinese economy registered a staggering annual growth rate in the vicinity of 10 percent. Over the past four years, however, it has clearly slowed from that breakneck speed.

There has also been increased skepticism about the reliability of the old growth figures, and even whether today’s slower pace of expansion can be maintained. These signs and others suggest that China may be entering a period of stagnation.

While China’s economy recorded its slowest growth in 25 years in 2015, it's official number was still a respectable 6.9 percent.

Here, the data is mixed. For example, in 2015, the number of international passengers traveling to and from China reached 42 million—a new record. The service economy has also been growing briskly, at an 8-9 percent pace in recent years.

On the other hand, the volume of rail freight traffic has declined for two consecutive years and electricity consumption has risen only 0.5 percent during the past year.

These microeconomic factors point to an economy growing in the 4-5 percent range.

Most importantly, much of the recent growth has been manufactured by enormous credit growth. Despite the authorities’ goal of wanting to trim total debt, total social credit growth is advancing close to the pace it was during the 2008-2009 global financial crisis.

Much of the rise in debt has been at the corporate level. According to the Bank for International Settlements, Chinese companies have accumulated $18 trillion in debt, equivalent to approximately 170 percent of gross domestic product.

The loans have come from the banking sector, which are now very vulnerable in the event of heavy defaults. State-owned companies account for over 55 percent of that debt.

Moreover, Chinese are issuing far more short-term debts. In the third quarter of 2016, 82 percent of Chinese corporate bonds had maturities of less than three years, compared with just 36 percent in the same quarter of 2010.

China’s two steadfast pillars of growth, exports and domestic investment, clearly show cracks in their veneers. China’s exports for October slumped 7.3 percent from the previous earlier, despite the yuan’s depreciation during the past year.

This is reflected in the stock of foreign exchange reserves, which peaked over a year ago at $4 trillion but have now fallen to $3.1 trillion.

Imports have also been falling—clear evidence that domestic demand has slowed more than the authorities or headline numbers acknowledge. Despite stringent capital controls, capital flight has clearly accelerated as affluent Chinese have lost confidence in the domestic economy.

Fixed asset investment is still running at 45 percent of GDP, leading to significant excess capacity in industries ranging from steel to solar panels.

Earlier objectives to lay off 6 million workers in state-owned enterprises early in President Xi Jinping’s term have not materialized, and state-owned banks continue directing credit to prop them up.

So, is the Chinese economy entering a period of stagnation?

Because the credit spigots cannot gush indefinitely and much of the mounting debt will likely go bad, it appears reasonably likely. And the window to solve these problems is quickly closing.