For Xi Jinping, China's Hong Kong Crackdown Has Come At A Cost 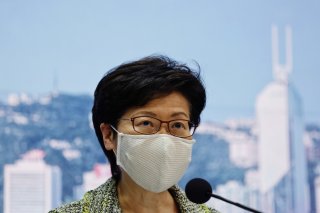 Each day the grip tightens. Another dissenter is arrested. Legal cases continue against others, with some facing possible life sentences. Strong warnings against renewed political agitation flow from the local government and Beijing. Educators are told to learn the party line. A troublesome election is delayed for a year.

All this has caused the U.S. State Department to issue a new warning to Americans about visiting Hong Kong (and mainland China) due to “a heightened risk of arrest, detention, expulsion or prosecution.”

From the viewpoint of mainland China, the new situation in Hong Kong—its obstreperous city in the south—can seem just fine. The streets are no longer jammed with protesters, sometimes violent, against policies of local and national governments plus the Chinese Communist Party (CCP). Newly-arrived Beijing officials have commandeered a thirty-story luxury hotel as offices from which to chastise Hong Kong bureaucrats who don’t follow orders effectively. Chief Executive Carrie Lam has been downgraded to the role of Beijing’s obedient agent, not the leader of an autonomous local government that responds to public opinion. The police have new authority to arrest perceived troublemakers and seek their financiers. Chances of pro-democracy beliefs seeping across the border and infecting the mainland have been diminished.

Yet in a broader context, there have been no true winners; all concerned have lost something, almost certainly with more losses to come.

For the people of Hong Kong, their civil rights have been severely curtailed by Beijing and a supine local administration that mostly ignores their clear preferences. The prized common law legal system that underpins its boast as “Asia’s Global City,” the world’s third-largest financial center, is being eroded. The “one country, two systems” political arrangement which Beijing promised would let Hong Kong people manage their own affairs with “a high degree of autonomy” is in tatters. Their financial and economic future is uncertain for reasons extending far beyond the effects of the coronavirus pandemic. One small example: a recent survey found that nearly 40 percent of American companies in Hong Kong expect to reduce their presence or leave altogether.

But this has been no clear victory for Xi Jinping, China’s maximum leader, and the Communist Party he leads. To be sure, he has quashed mass protests that he found treasonous, but the price has been high. His effort has increased tensions in the fraught American-Chinese relationship—called the world’s most important by both sides—already at its lowest point for decades. Evidence-free claims that American “black hands” fed the Hong Kong unrest has made resolving broad trade, economic and political differences even more difficult; some analysts worry about war, either cold or hot. American sanctions on eleven Hong Kong-based officials and withdrawal of certain trade advantages leave the city’s banks and companies uncertain about how these and future sanctions will affect them. One byproduct: Hong Kong is no longer a conduit for importing American technology that the United States won’t allow Beijing to buy directly. The crackdown has also increased doubts around the Pacific and in Europe about the wisdom of relying closely on China when important matters are at stake.

All this has left Hong Kong people more disaffected than ever, which cannot have been a Beijing goal. Most have long accepted that their city is unavoidably part of the People’s Republic but the vast majority does not want daily life controlled in detail by the mainland’s ruling party and they identify themselves first as “Hong Kongers,” not as citizens of China. A small pro-independence movement did arise, its influence greatly exaggerated by Beijing to justify the harsh crackdown. But desire for an independent Hong Kong, strongest among students worried about their own futures, more accurately reflects widespread anger and frustration about authorities’ refusal to negotiate serious issues, such as investigating alleged police brutality. The true believers in Hong Kong independence might well fit into one of those double-decker trams that crawl through Wanchai.

Yet if all concerned had shown more foresight, tolerance, common sense, and compromise, the worst might have been avoided. The political showdown that eventually brought disruption, intervention and such damage to public life in Hong Kong was not inevitable.

During its 150-year colonial grip, Britain did little to promote electoral politics other than a limited amount during its final years in charge. Yet 1997’s final handover terms decreed that “Hong Kong people” would govern themselves with great autonomy, with only defense and diplomacy reserved for the central government. Legal and economic systems were to remain intact until at least 2047. It set “universal suffrage” as the “eventual” political goal though precise terms were not clarified. Half the members of the Legislative Council (Legco), which has limited powers, were chosen by popular vote and others by mostly pro-Beijing interest groups. An efficient civil service remained in place, with Beijing’s choice—a politically reliable tycoon—as the first Chief Executive to head an executive-driven governing system.

But Hong Kong’s pro-democracy activists had reason to believe that liberalization could come after ten years—in 2007—and assorted talks continued through various channels with limited progress. Finally, in 2014, Beijing made an offer; it would allow the next Chief Executive to be selected by popular vote with “two or three” candidates competing for the post—provided that an election committee dominated by Beijing’s friends approved them. Angry pro-democracy members of Legco voted this down after its pro-government members made a serious tactical mistake; they fled the chamber in hopes of preventing any vote, allowing those who stayed behind to reject the offer 23-8 even though an all-member vote would have passed it.

Rejection proved a grievous error as even a flawed election would have been a vast improvement over having each Chief Executive named by the 1,200 person pro-Beijing committee. American and other diplomats advised pro-democrats to take the deal and seek further gains later—such as having more Legco members chosen by popular vote rather than by interest groups. Even this flawed system would have seen rivals with differing platforms compete for public support. And it would have normalized the concept of having people select their own leaders, something impossible elsewhere in China. Many Hong Kongers were willing but vocal activists demanded more.

This led to the Occupy Central demonstrations, which earned worldwide sympathy for protesters with their yellow umbrellas but nothing tangible. Beijing authorities, angered by rejection of what they considered a generous concession, made no new offers. Yet if the flawed electoral system had been installed, Hong Kong politics could have been more peaceful and tolerable to China, however imperfect.

That dim possibility ended last year when Chief Executive Lam suddenly introduced a sweeping extradition bill that far exceeded what was needed to solve a limited problem. It would let criminal suspects be shipped to many other jurisdictions, including to mainland courts where judges are picked by the ruling party and effective defense is difficult to impossible. Any Hong Kong resident—including foreigners—could then be tried there for allegedly breaking China’s ill-defined criminal laws, such as “making trouble and creating a disturbancem” if Beijing demanded their extradition. The fact that they may have done nothing illegal under Hong Kong law would not matter.

Hong Kong’s bar association and other legal experts warned this gravely eroded the city’s common law system but were ignored. Lam and her pliant enablers went ahead, pushed by Beijing. Huge and increasingly violent demonstrations, and harsh police reprisals, ensued. Youthful demonstrators demanded that the extradition bill be withdrawn, which eventually happened. But they had added four other demands that the government found even more objectionable, including for Lam’s immediate resignation. Many demonstrators were students also motivated by grievances about poor job prospects, costly housing, a widening income gap and an establishment seemingly indifferent to their needs—the combination of the Lam administration, the mainland’s Communist Party and its pliable Hong Kong loyalists, plus local business leaders who consistently echo the Beijing line for their own commercial reasons.

In theory, some demands might have been negotiable in part. But the energetic and youthful crowds had no recognized leaders authorized to speak for them—even if the government side had wanted to talk, which it didn’t. That reflects China’s increased intolerance since Xi Jinping assumed power in 2012; the CCP has become more brutal when repressing perceived foes such as Tibetans, Muslim minorities, academic critics and human rights advocates. Thus it had no sympathy for Hong Kong’s young protesters and clearly had lost faith in the local government’s ability to keep order.

Beijing’s solution: a new National Security Law imposed on Hong Kong that clearly violates the city’s de facto constitution which outlines its supposed autonomy, known as the Basic Law. In extremely vague terms the security law outlaws sedition, separatism, collusion with foreigners, and other items; its imprecision allows authorities to arrest almost anyone who says or does something they find offensive, and perhaps ship them across the border for prosecution—with life terms a possibility. It allows those Beijing officials housed in that former hotel to ignore Hong Kong laws they find restrictive; warrant-free searches and arrests are now possible, for example. Once admired as a haven for free speech and a free press, new restrictions are taking hold; some foreign journalists have been forced to leave, for example. Already scores of leading dissenters, including outspoken publisher Jimmy Lai, have been booked and accused of foreign collusion. More than 9,000 others have also been arrested. Beijing postponed September’s scheduled Legco elections for a year—a clear violation of the Basic Law—with a dozen pro-democracy members told they cannot seek re-election.