FOLLOWING HIS graduation from West Point, Andrew J. Bacevich had a distinguished career as an army officer, retiring as a colonel and serving in both Vietnam and the Gulf War. He has since carved out a second career as an iconoclastic scholar preaching the evils of perpetual war. In numerous essays and books, Bacevich, who teaches international relations at Boston University, has ventilated his contempt and despair for America’s penchant for intervention abroad, directing his ire at both the liberal hawks and neoconservatives. Throughout, his stands have been rooted in a cultural conservatism that sees America as having strayed badly from its republican origins to succumb to the imperial temptation.

In his new book Breach of Trust, Bacevich expands upon his critique of American society and the military. Bacevich’s central contention is that a chasm has developed between the two, one that ill serves both. He depicts a crisis in civil-military relations, one that rests on the transformation of the military into a separate caste in violation of the fundamental tenets of American democracy. Historically, it has been citizens who have shouldered the responsibility to defend the Republic. Relying on professionals, he argues, makes war too easy and those trusted with conducting it unaccountable.

But just how compelling are these claims? Bacevich explains that he “began this book intending to write a conventional narrative history of U.S. civil-military relations since World War II,” but ultimately decided to write on the problems created by America’s “reliance on a force of military professionals who exist at a considerable remove from the rest of society.” He would have been better served had he pursued the intended project. Instead, he has produced an unpersuasive work that vents myriad gripes and grievances while misattributing their cause.

Bacevich manages to undermine his central argument in his introductory chapter. According to him, “To sustain a massively unpopular war, the state had resorted to coercive means: report for duty or go to jail.” As a result, “Those less clever or more compliant ended up in uniform and in Vietnam.” Yet just two pages later, it is the all-volunteer force that enables the 2003 invasion of Iraq: “With the people opting out, war became the exclusive province of the state. Washington could do what it wanted—and it did.” Given that Washington was able to sustain a much more massive, exponentially more deadly war through three presidential administrations with a draftee force, it stands to reason that something other than switching away from conscription is the underlying issue.

Bacevich himself has repeatedly told us what that “something” is. In his 2005 work The New American Militarism, he argued that American foreign policy has historically been dominated by a desire to “reshape the world in accordance with American interests and values.” Indeed, he wrote, Americans see those as “so closely intertwined as to be indistinguishable.” He also cited C. Wright Mills’s 1956 argument that the United States is possessed of “a ‘military metaphysics’—a tendency to see international problems as military problems and to discount the likelihood of finding a solution except through military means.”

Next in his 2010 work, Washington Rules, Bacevich references Henry Luce’s 1941 Life manifesto clamoring for an “American Century” and exhorting his fellow citizens to “accept wholeheartedly our duty to exert upon the world the full impact of our influence for such purposes as we see fit and by such means as we see fit.” Bacevich rightly tells us that “at times, the armed forces have relied on citizen-soldiers to fill their ranks; at other times, long service professionals.” Yet a continuity exists:

Call them the sacred trinity: an abiding conviction that the minimum essentials of international peace and order require the United States to maintain a global military presence, to configure its forces for global power projection, and to counter existing or anticipated threats by relying on a policy of global interventionism.

The arguments in those two books are, on their face, much more in accord with the historical record. And indeed, Bacevich is much too good a historian—and too intellectually honest—to hide key evidence from the reader. Thus, he is consistently obliged to undercut his own case by pointing to inconvenient facts, yet seems not to notice that he is doing so.

BY FAR the most compelling charge that Bacevich levels against a professional force is that it violates the American social contract. He refers to the 1944 declaration by Under Secretary of War Robert Patterson that “in a democracy, all citizens have equal rights and equal obligations. When the nation is in peril, the obligation of saving it should be shared by all, not foisted on a small percentage.” Bacevich notes that America fielded a twelve-million-man force for World War II, including the sons of the president and other leading politicians, Hollywood idols, sporting heroes and other elites. Yet we’re not trying to raise a force of twelve million today, let alone the proportionally larger force for a national population that has more than doubled. It seems odd, indeed, to force those who would otherwise be wildly successful in their own chosen field to instead fight our wars.

He cites statements by Winston Churchill and the Pentagon’s Joint War Plans Committee that the populations of England and the United States would not put up with a long war of attrition. He says that this is why “compared to the losses suffered by the other major belligerents, the United States emerged from the war largely unscathed.” It also helped that we joined World War II several years after the other nations and fought it as an away game and therefore took no casualties on the home front. But the democracies generally took few casualties compared to the autocratic states; the Soviet Union, Germany, Japan and China are the only participants who lost as many as five hundred thousand dead—and they all lost millions.

Moreover, the United States lost over thirty-six thousand in Korea and fifty-eight thousand in Vietnam, both with draftee armies. In all of the wars and military actions over the four decades of the all-volunteer era combined, we’ve lost fewer than 7,600. The death of 266 volunteers was enough to send us high-tailing it out of Beirut; it only took forty-three in Somalia.

While it’s not inconceivable that the transition to an all-volunteer force has made us more risk averse rather than less—Bacevich himself has documented the emergence of a cult of worship of the military—the more plausible explanations lie elsewhere. Many of the interventions of the past decades, while small, were undertaken to further peripheral interests. The fact that the battles of the last two decades have been fought and documented almost instantaneously on television and, more recently, in social media has also personalized each casualty in a way that didn’t happen even as recently as Vietnam. Military training, equipment and medical care have all improved radically, reducing the death toll.

Regardless, there’s simply no evidence that the fact that “somebody else” is doing the fighting and dying has made us less sensitive to the loss of American sons and daughters. Far from it. We’re demonstrably much more sensitive to military casualties than we were during the most recent draft era and, indeed, any previous point in American history.

Bacevich is particularly concerned with what he terms the “Great Decoupling” seen in the war on terror in which, unlike in the Civil War and World War II, fighting a war didn’t come with a radical transformation of the civil economy. Instead of rationing consumer goods and manning the factories, Americans not in uniform were told to go shopping and “enjoy America’s great destination spots” while receiving a tax cut. Whatever the folly of tax cuts while spending hundreds of billions of dollars fighting overseas conflicts, there’s no unemotional argument for imposing austerity on the public in the aftermath of the 9/11 attacks. The Civil War and World War II involved massive field armies slogging it out in symmetrical conflict; the wars in Afghanistan and Iraq were both lightning-fast regime-change missions followed by years of counterterror and counterinsurgency operations. Not only would we not have wanted to fight these wars with amateurs, but their cost was a small fraction of GDP compared to those earlier conflicts.

Bacevich romanticizes the Civil War and World War II as exemplars of an earlier golden era when “war was the people’s business and could not be otherwise. For the state to embark upon armed conflict of any magnitude required informed popular consent.” Alas, he laments, “In their disgust over Vietnam, Americans withdrew from this arrangement.” But this elides a rather important point: Americans fought in Vietnam under that arrangement. Nearly sixty thousand died in the most controversial war in our history. And most of them had no choice in the matter. No wonder Americans withdrew from the arrangement. 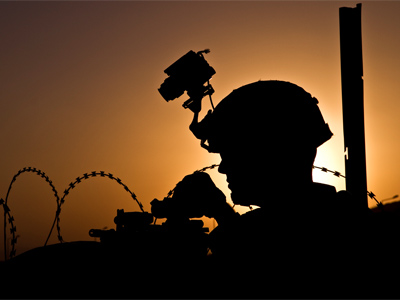