Energy Politics vs. the Earth

AROUND THE corner on K Street, one of the half dozen designer salad places in my part of downtown Washington recently closed after about a year in business. “Coming soon,” the sign in the papered-over window reads, “Dunkin’ Donuts.” Hurried Washingtonians will soon be able to get their calorie fix for a tenth of the time and money spent. Maybe not so good for them in the long run, but John Maynard Keynes told us what happens in the long run.

This, in miniature, is the choice the United States faces on energy and climate change. Fossil fuels are convenient, cheap, plentiful and, in the long run, deadly. Renewable energy—from the sun and the soil, the wind and the waves—is comparatively expensive, hard to produce and healthy. Mankind has chosen the cheap and plentiful path for the past two hundred years, burning coal, oil and gas and spewing the trash into the atmosphere. In May, the level of carbon dioxide in the atmosphere surpassed four hundred parts per million, the highest level in three million years. The planet teeters on the cusp of calamity. Science says it’s time to switch to salads.

Michael Levi, one of the nation’s most prolific and quoted experts on energy and climate policy, argues in The Power Surge that despite the looming threat of climate change, a rapid and complete switch to renewable energy sources is impossible in the current political and economic environment. He says the nation can—and must—exploit both fossil fuels and renewable-energy sources for the foreseeable future. The United States should aggressively pursue the parallel revolutions in oil and gas extraction and in clean-power production. Together, he says, they can assure a steady and secure flow of energy without grievous and permanent damage to the economy or the climate.

In a play on President Obama’s “all of the above” energy strategy, which pairs expanded domestic oil and gas development with government support for clean energy, Levi dubs his approach “most of the above.”

He frames the issue early in the book, saying that everything we knew about American energy is changing. Oil imports are falling for the first time in decades. Newly discovered reserves of natural gas have sent prices plummeting, with a host of sweeping effects, mostly good. Vehicle efficiency is rising rapidly, driving down oil consumption. Prices for wind, solar, geothermal and other alternative technologies are falling.

These should be welcome developments, but in the polarized politics of America today they have spawned bitter battles and costly lobbying campaigns. Coal producers, utilities and coal-state lawmakers accuse the Obama administration of waging a “war on coal.” Environmental groups attack oil and pipeline companies for poisoning the nation’s air and waters. Republicans dismiss government clean-energy incentive programs as industrial favoritism and crony capitalism. Local citizens are taking on natural-gas drillers over air pollution, contamination of groundwater and intrusive truck traffic. Wealthy coastal dwellers band together to block offshore wind installations. Wildlife enthusiasts protest desert solar farms for threatening rare lizard species. On climate, one is either an “alarmist” or a “denialist.”

“Across the nation,” Levi writes, “people are picking sides.”

This polarization on the linkages among energy, national security and the environment is hardly new. The battle lines were drawn in the early 1970s, with the advent of Earth Day, the establishment of the Environmental Protection Agency (EPA), the “small is beautiful” movement and the shock of the 1973 oil embargo. President Richard Nixon set a goal of energy self-sufficiency by the end of the decade through a combination of more domestic production, conservation measures and lavish federal funding of alternatives to fossil fuels—all parallel to the steps the Obama administration has been pursuing since early 2009. Nixon’s strategy failed, and by the end of the 1970s the United States was importing more oil than in 1973. Then as now, the conflict was only superficially about fossil fuels versus renewable energy, production versus conservation, the hard-energy path versus the soft-energy path. On this point, Levi cites Hans Landsberg, a twentieth-century economist at Resources for the Future, one of the earliest research organizations to delve deeply into issues of energy supply, national security and economic growth.

“It can be argued,” Landsberg wrote in 1980, “that energy was tailor-made to become the arena for the clash of opinions that, to be sure, are related to energy but for which energy is at best a proxy.” He posited the idea that the energy-policy debates of the 1970s actually reflected “a fierce, prolonged bout of soul-searching.”

And thus it remains today. Ask voters about the threat posed by climate change, and their views break along party lines. Inquire if the answer to energy shortages or high gasoline prices is more drilling or more conservation, and Democrats and Republicans present mirror images. Pose a question about government support for clean energy versus subsidies for traditional energy, and Republicans will cry “Solyndra!” while Democrats shout “Deepwater Horizon!”

LEVI, A senior fellow for energy and the environment at the Council on Foreign Relations and something of a polymath, attempts to bridge these divides. (He has advanced degrees in physics and war studies and has written widely on climate change, oil markets, nuclear proliferation and arms control.) His approach is anecdotal and analytic, generally thoughtful and, at times, frustrating. He often forces the two sides further toward the poles to position himself as the rational man in the middle. He repeatedly says that development of virtually all forms of energy is acceptable as long as it is done carefully, intelligently, with sufficient concern for the environment and so on. He is a bit promiscuous with the phrase “to be certain.” He is enthusiastic about the opportunities offered by the shale-gas boom, for example, but only as long as drilling is accompanied by adequate environmental safeguards. It is not always clear from the book what those protections entail—what level of fugitive methane emissions from gas wells is acceptable, for example, or how groundwater can be protected around drilling sites. He lays out the arguments for and against construction of the Keystone XL pipeline, which would carry about eight hundred thousand barrels of thick crude a day from Alberta to the Gulf Coast, but does not come down firmly on one side or the other. (Elsewhere he has essentially endorsed the project as beneficial for the American economy and only minimally risky to the environment.)

He takes to task the antagonists at the far ends of the fossil-renewable spectrum, who insist that the nation must choose a single energy path and pursue it relentlessly.

“This view is mistaken,” Levi writes. He goes on:

The world has changed fundamentally since the battle lines in the fight over American energy were first set. It is no doubt possible to push too hard on any particular energy source: to expand oil and gas production so blindly and rapidly that it entails massive environmental damage outweighing any economic, security, or (for natural gas) climate gains, or to push so quickly into new cars and trucks and alternative energy that the economic costs overwhelm any economic, security, or climate benefits. But the fact that there are wrong ways to pursue each energy source does not mean there aren’t opportunities to gain from all of them. The United States can strengthen its economy, improve its national security, and confront climate change if it intelligently embraces the historic gains unfolding all across the energy landscape.

Levi focuses closely on two of the (mostly) positive developments in recent years—the explosion of natural-gas production brought by hydraulic fracturing and horizontal drilling, and the dramatic improvement in vehicle efficiency from weight reduction and refinements to the internal combustion engine, as well as hybrid and battery-electric technologies. Both developments, along with increased industrial efficiency and a decline in manufacturing stemming from the deep recession and slow recovery, have helped reduce greenhouse-gas emissions in the United States by roughly 10 percent from pre-recession levels. President Obama has pledged in international climate-change negotiations to cut U.S. emissions by 17 percent from 2005 levels by 2020.

The author visits Ohio to put faces to the fight over fracking for natural gas, introducing a farmer and a dairyman who disagree sharply over the financial and environmental impact of fracking. Levi is sympathetic to the opponents of drilling, but ultimately believes the benefits of the shale-gas revolution far outweigh the disadvantages. The substitution of natural gas for coal in power generation, for example, has led to a sharp drop in carbon emissions and reduced energy costs for manufacturers. Yet, always careful to temper his enthusiasm, Levi notes that natural gas is still a fossil fuel that produces significant carbon emissions and must someday be supplanted by zero-carbon sources if humanity is to avoid the direst consequences of climate change.

“Shale gas has the potential to deliver big (though not revolutionary) economic gains, promises to spare the United States dependence on overseas natural gas suppliers, and could be used to help reduce U.S. consumption of oil,” the ever-measured Levi concludes. “Whether the country will chart a course that protects communities and exploits the potential of abundant natural gas remains to be seen.”

Pullquote: A rapid and complete switch to renewable energy sources is impossible in the current political and economic environment. Image: 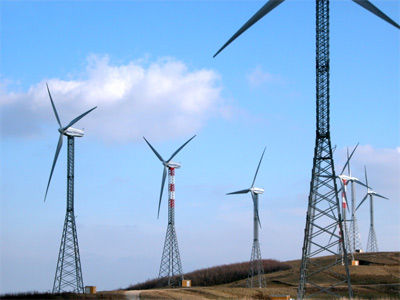