Eyes and Ears of the Arab Spring IN HIS 1998 work Dream Palace of the Arabs, Fouad Ajami wrote, “As the world batters the modern Arab inheritance, the rhetorical need for anti-Zionism grows. But there rises, too, the recognition that it is time for the imagination to steal away from Israel and to look at the Arab reality, to behold its own view of the kind of world the Arabs want for themselves.” Whether Ajami realized it or not, these words offer an eerily prescient view—thirteen years ahead of time—of the dynamic behind the Arab Spring and its autumn and winter sequels. In country after country, Arab crowds have taken to the street for a cause more positive and all-embracing than anti-Zionism: the demand for an end to corrupt authoritarian regimes and for a greater say in their own future. What shape that future will take remains to be seen, and many basic questions have yet to be answered. Can democracy blossom overnight in societies that have always been dominated by oppressive force? If democracy does take root, can respect for minority rights survive the tyranny of a poor, ill-schooled and often intolerant majority? Would democratically elected demagogues pose even more of a threat to peace and stability in the Muslim-Arab world than old-line authoritarian regimes and monarchies with a selfish stake in maintaining the status quo and “keeping the lid on”?

Meanwhile, where can one turn for detailed, reliable coverage of what some now call the “Arab Awakening”? For millions of people around the world, including actual participants on the ground and in the streets of the Middle East, the single most important news source for the events still unfolding in Tunisia, Egypt, Libya, Yemen, Syria and Bahrain is the English-language channel of the Qatar-based Al Jazeera television-news network. Like it or not, it is no exaggeration to say that Al Jazeera has been the eyes and ears of this crucial news story. More often than not, Al Jazeera correspondents are the first on the scene, and Al Jazeera anchors and interviewers provide the most detailed follow-up, discussion and analysis of breaking events in the Arab world.

This, to put it mildly, is odd. To offer a European analogy, it would be as if an English-language television channel owned by Grand Duke Henri of Luxembourg and operated out of his tiny realm were the most influential news source for the entire European Union and for millions of people elsewhere following the current European politico-economic crisis. But there is no denying the facts: Al Jazeera’s English-language news channel reaches an estimated 220 million households worldwide. Currently celebrating its fifth anniversary, in the few years since its founding even its fiercest critics have come to acknowledge both its increasing global impact and, more recently, its indispensable role in covering the wave of revolutionary ferment sweeping the Middle East.

HOW DID so unlikely an enterprise, funded by a minor Arab potentate, come to occupy such a stellar position? And what sort of information product is it dispensing to its growing millions of viewers? As chance would have it, I may be one of the few people still alive who was present at the very modest beginnings of what is arguably today’s most strategically influential television-news operation. Although Al Jazeera’s global English network is only five years old, its roots run much deeper. Hence my story begins in the mid-1970s at a lavish reception in what was then one of Washington’s leading hotels, the old Sheraton Park. The occasion was the launching of Qatar Television, a modest, strictly domestic broadcast service for the tiny emirate but, at the time, a dramatic first in a region of backward bedouin despots where “modernization” usually meant no more than acquiring fleets of Cadillacs and imported blondes for the reigning dynasties.

For some reason, the al-Thani ruling family of Qatar was different. The then reigning emir, Khalifa bin Hamad, had been in sole charge since Great Britain gave up its protectorate in 1972. While he would be deposed by his Westward-looking son, Hamad bin Khalifa al-Thani, in 1995, he must have been a man ahead of his time back in the 1970s to even think of setting up a television-news service for what was then an isolated Arab backwater, a tiny patch of arid land on the Persian Gulf.

For hands-on technical assistance, Emir Khalifa had turned to an old acquaintance of mine, a Levantine, journalistic soldier of fortune by the name of Levon Keshishian. While we shared little else in common, Levon and I were both of Armenian ancestry and both pro bono friends of the Armenian diaspora, giving free advice and assistance to church and charitable groups. So when Qatar Television threw its opening-night party in Washington, I was invited by Levon. A tiny man with an enormous beak (I once recognized him by his nose alone, protruding from behind a pillar concealing the rest of him in the main lounge of the National Press Club), Levon had endless energy, ambition and ingenuity. After becoming the UN correspondent for Al Ahram, the Egyptian daily that was then the most influential newspaper in the Arab world, he was able to parlay the cachet of that position into “after-hours” work for various Middle East patrons. A multilingual polymath who could have come straight out of the pages of an Eric Ambler spy novel, he once told me that he had five passports acquired over the years for services rendered to assorted regimes of varying degrees of unsavoriness. He never traveled without all of them—just in case. So it didn’t come as much of a surprise to me that Emir Khalifa bin Hamad, having intuited the importance of electronic-communications media long before most of his fellow sheiks, would hire Levon Keshishian to launch the venture. Already an old man in the mid-1970s, now Levon is long gone and little remembered. But he deserves a footnote in history as the man who set the long chain of events in motion that would eventually lead to Al Jazeera as we know it today.

Why did the previous emir and his son Hamad bin Khalifa after him recognize the value of a media presence so clearly and so early? Perhaps because of the particularly tenuous nature of their little kingdom. Long a fiefdom of Bahrain, Qatar fell under nominal Ottoman rule from 1872 until 1913. In 1916, as the Ottoman Empire disintegrated, it became a “protected” state, signing a treaty that gave Great Britain control of its defense and foreign relations. In September 1971, as Britain withdrew its forces from the Persian Gulf, Qatar declared independence. The following February, then crown prince Khalifa bin Hamad seized power to become emir, just as his own son would do to him in 1995. He became the sole proprietor of a very valuable, very vulnerable piece of real estate.

The conventional wisdom that you can’t be too rich or too thin may apply to society beauties, but you can be too rich and too petite if you happen to be an Arab ministate sitting on one of the world’s largest gas reserves, with a population composed largely of non-Arab immigrants (only 40 percent of Qatar’s 848,000 citizens are ethnic Arabs, with most of the remaining 60 percent being Pakistani, Indian, Iranian or other imported help). Qatar also has fewer than twelve thousand active military personnel to defend it, a tempting GDP of $91.3 billion a year, and rival regional superpowers Saudi Arabia and Iran for neighbors. Perhaps members of the al-Thani clan have a few more little gray cells, sounder business sense and a stronger survival instinct than many neighboring dynasties; whatever the reason, Qatar’s ruling family was unique in its early realization of the importance of winning friends and influencing people via commerce, diplomacy and the air waves.

It has intelligently diversified its financial portfolio by plowing raw-material revenues into chemical, industrial and development projects and a five-star commercial airline, all of which advertise heavily on Al Jazeera. Meanwhile, two American military bases housing over thirteen thousand U.S. personnel give Qatar protective status as one of Washington’s key strategic partners in the region. At the same time, Qatar has cultivated good relations with a wide range of Arab opinion leaders, including many political reformists characterized as “mainstream Islamists,” a supplementary insurance policy backing up America’s security guarantee for this small, rich monarchy. As Lebanese Middle East expert Talal Atrissi recently told the New York Times, it would appear that “Qatar is a country without ideology. They know that the Islamists are the new power in the Arab world. This alliance will lay the foundation for a base of influence across the region.”

But it isn’t quite that simple. While many of the voices demanding freer, less corrupt government in the Arab world fall under the broad “Islamist” rubric, the crowds that have taken to the streets in countries like Egypt and Syria are disproportionately young, affluent, educated, Westernized and, surprisingly often, English speaking. In other words, they are just the sort of people that form Al Jazeera’s core viewership and just the sort of people who must form the popular base for any truly democratic reform in the Muslim world in general and the Middle East in particular.

Pullquote: Even Al Jazeera's fiercest critics have come to acknowledge both its increasing global impact and, more recently, its indispensable role in covering the wave of revolutionary ferment sweeping the Middle East.Image: 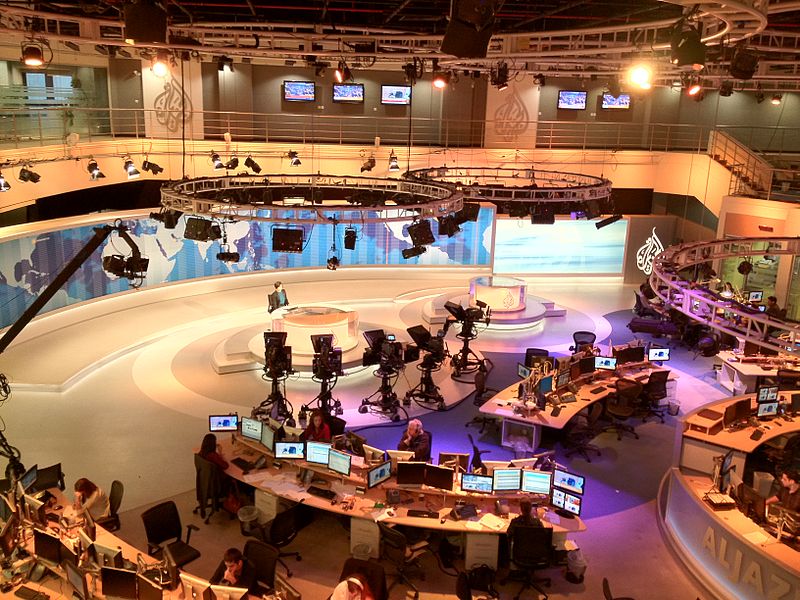