MOST HISTORICAL questions have no more than modest relevance for current policy debates. Times and context change. The American economy grew rapidly under the protectionist regime of the late nineteenth century; would it thrive under a new protectionist regime? It’s impossible to say, given the radically different nature of the modern world economy. The Vietnam War demonstrated the difficulty of defeating a committed insurgency aided by outside forces; is the American effort in Afghanistan similarly doomed? Maybe, but Afghans aren’t Vietnamese, and the Taliban isn’t communist.

Yet there is one historical question that has direct and overriding policy implications. It might be the most important historical question of the last century and must rank among the top handful of all time: Why has there been no World War III? To sharpen the question, in light of the answer many people reflexively supply: Did the existence of nuclear weapons prevent a third world war?

The question’s significance is obvious, given the consequences of such a war. Its answer is less so, despite that reflexive response. Broadly speaking, there are two possible answers. One is that, yes, nuclear weapons prevented a third world war by pushing the cost of victory far beyond any achievable benefits. This answer presumes that the ideological competition between the United States and the Soviet Union would have escalated to war had the big bombs not scared the daylights out of everyone. The second answer is that, no, the nukes didn’t prevent the war. Something else did. Perhaps war simply wasn’t in the cards.

The first answer seemed reasonable during the quarter century after World War II. The salient model of international relations was the war-prone system of the period from 1914 to 1945. Great powers seemed fated to fight things out like characters in a Greek tragedy—unless some deus ex machina intervened to pull them back. Nukes were that device.

On the other hand, maybe the 1914–1945 model wasn’t applicable to the postwar period. Perhaps the more instructive parallel was the century from 1815 to 1914, when no Europe-wide (let alone worldwide) conflict took place. Perhaps peace, not war, is the ground state of international affairs.

The policy implications of these alternative answers could not be more different. If nuclear weapons were indeed essential to preventing World War III, then the United States and other countries ought to preserve and maintain their nuclear arsenals. It needn’t follow that the nukes should proliferate—although one could reasonably ask whether, if deterrence works among superpowers, it would also work among regional powers. But at least the largest powers ought to keep their nuclear powder dry.

By contrast, if war was not otherwise ordained—if nuclear weapons were not the critical deterrent to war—then the policy implication is just the opposite. The nukes ought to be dismantled. Unnecessary and expensive, they are a horrible accident waiting to happen. The world has been very lucky not to experience nuclear destruction since 1945; such luck can’t last forever.

EVAN THOMAS appears to subscribe to the first school of thought. It forms the premise for Ike’s Bluff, the bluff being that Dwight Eisenhower would use nuclear weapons if the Soviet Union or China pushed too hard against the American sphere. The title is a bit misleading in that Thomas grants that he doesn’t know if the bluff was in fact a bluff or not. “He had kept the peace by threatening all-out war,” Thomas says in summarizing Eisenhower’s eight years in office, adding that he judges it “likely” that Eisenhower had no intention of using nuclear weapons. But he then cites Robert Bowie, who worked with Eisenhower and subsequently studied the issue as a historian, to the opposite effect. “He was sure Ike would have been willing to use nuclear weapons in a crisis (say, if Red China moved on Taiwan),” Thomas writes of Bowie.

We’ll never know, if only because Eisenhower himself probably didn’t know. The great strength of Thomas’s engaging and insightful book is his portrayal of Eisenhower’s ambivalence on some central questions of policy. Eisenhower was elected president in 1952 on the strength of his illustrious performance as supreme allied commander in Europe in World War II. At a time when Americans were more fearful than they had ever been in their national history—legitimately fearful of the Soviet Union’s recently acquired nuclear capability, unduly fearful of communist infiltrators in the U.S. government—they looked to Eisenhower for reassurance. Eisenhower sealed his triumph over Adlai Stevenson by promising to go to Korea, where peace talks to end the war there had bogged down. He didn’t say what he would do in Korea, but millions of Americans assumed that the man who had brought victory home from the greatest war in history could bring victory, or at least peace, home from the limited conflict in Korea.

Eisenhower went to Korea and looked around. Then he returned to America and pondered how to break the logjam in the peace talks. He and Secretary of State John Foster Dulles hinted that if the communists remained intransigent, the United States might use nuclear weapons against them. The logjam broke, although the death of Stalin and the doubt it cast over continued Soviet support for the North Koreans and Chinese probably had as much to do with the breaking as Eisenhower’s saber rattling.

Nonetheless, the episode propelled American diplomacy into the nuclear era. Harry Truman had dropped two atomic bombs on Japan, but after World War II he put the new weapons on the shelf. He didn’t threaten to use them when the Soviets were slow to evacuate Iran in 1946. He didn’t brandish them when the Russians blockaded Berlin in 1948. He didn’t talk about employing them to rescue the Chinese Nationalists from the Chinese Communists in 1949. He conspicuously rejected the advice of Douglas MacArthur to use them in the Korean War in 1951, and he fired MacArthur after the general publicly pressed the matter.

Truman’s seven years of refusing to engage in nuclear diplomacy were followed, within mere weeks, by Eisenhower’s eager embrace of it. Yet Eisenhower’s views on nuclear weapons were mixed, at times conflicted. Even as he suggested that nuclear weapons might be as usable as conventional weapons, he made clear he knew they were something quite different. Thomas deftly describes what many Eisenhower watchers considered the finest speech he ever gave: an April 1953 address to the American Society of Newspaper Editors in which he movingly explained what the arms race was costing America and the world. “The cost of one modern heavy bomber is this: a modern brick school in thirty cities,” Eisenhower said. He went on:

***We pay for a single fighter plane with a half a million bushels of wheat. We pay for a new destroyer with new homes that could have housed more than eight thousand people. . . . This is not a way of life at all, in any true sense. Under the cloud of threatening war, it is humanity hanging from a cross of iron.***

Eisenhower’s remarks were all the more noteworthy in that he was in physical agony while delivering them. Thomas devotes considerable space to Eisenhower’s health, which was far worse than most Americans realized. At the moment of his speech to the editors, he was suffering from acute gastrointestinal distress of a sort that had plagued him his whole adult life. The pressure of work aggravated the condition; the only thing that reliably relieved it was escape from the demands of office. This was why Eisenhower spent so much time playing golf.

But he suffered a heart attack in 1955 and a stroke in 1957. He underwent surgery to remove an intestinal obstruction in 1956. His doctors and press spokesmen conspired to conceal the gravity and extent of his physical troubles. Some of their concern was simple care for Eisenhower’s privacy. But no small part of it was connected to Eisenhower’s reliance on nuclear weapons as a tool of diplomacy. Presumably, if the Soviets discovered that Eisenhower was incapacitated, they might try to jump Berlin or gain an advantage elsewhere. At the same time, Americans and others watching Eisenhower wanted to know that the man with his finger on the nuclear trigger was of sound mind and reasonably sound body.

Thomas’s treatment of Eisenhower’s health is almost his only diversion from foreign policy. He spends a few pages defending Eisenhower’s civil-rights policy against the standard criticism that the Kansas-reared president only grudgingly enforced the Supreme Court’s landmark anti–Jim Crow decision in the 1954 case of Brown v. Board of Education. Interestingly, given Thomas’s emphasis on foreign policy, he neglects to note that in the speech Eisenhower gave explaining his reasons for sending federal troops to enforce desegregation in Little Rock, Arkansas, the president cited foreign-policy concerns. The world was watching, Eisenhower said, to see if people of color could get fair treatment in America. In a period when hundreds of millions of newly independent people of color in Asia and Africa were choosing between the American system and the Soviet system, this was a matter of gravest importance. 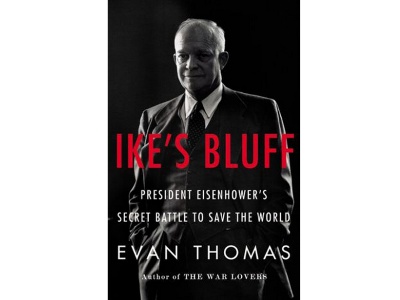