[amazon 158648981X full]ALMOST EXACTLY a hundred years ago, a young Italian airman dropped a couple of grenades from a small biplane on Turkish soldiers in the war between Italy and the Ottoman Empire for control of the largely desert territory. The grenades were difficult to use, and the crew had to pull out the pins with their teeth. But according to most accounts of the history of aerial warfare, this launched the bombing age. Now, a century later, expensive high-tech fighter-bombers are patrolling over the same desert areas, this time destroying the ground units of Colonel Qaddafi’s discredited army (and occasionally civilians). The power of the weapons and how they are delivered has been transformed. The questions that first arose in 1912 about the effectiveness and morality of air attacks remain.

Martin van Creveld completed his new history of the airpower century just before NATO provided a neat top-and-tail to the story. But he would no doubt argue that the effectiveness of the new strikes on Libya is questionable. His thesis is broadly that the importance of modern air forces has been greatly exaggerated: they can neither hold land nor deploy over long distances; their accuracy is not a great deal better than the German Ju-87 “Stuka” dive-bomber of World War II; modern aircraft are expensive to maintain in the field and too few in number to confer a formidable advantage. In this case he might well add that the strategic confidence that air strikes would make the difference in the Libyan civil war has, like so much airpower extrapolation, proved to be misplaced. Qaddafi’s forces are taking evasive precautions, the ebb and flow of the conflict is difficult to gauge, and NATO has never really spelled out its aims. Invasion and occupation might do the trick, but as the legacy of Afghanistan and Iraq has shown, this is a much riskier business than it might once have looked.

On issues of morality, van Creveld plays his cards close to his chest. His real beef is not about the ethical questionability of using aircraft in the knowledge that they will also kill civilians, but about the waste of resources and the unredeemed promises which result from the wrong choice of strategy and weapons. It is not perhaps bad faith on the part of the century’s air-force generals—who seem to have sincerely believed in the power of their armaments—but misplaced optimism and blind disregard of the facts. From Libya in 1912 to Iraq in 2003, van Creveld argues that it is really armies that matter (and occasionally navies). Airpower has been a misnomer.

This is a deliberate polemic. Ever since it was clear that aircraft could carry bombs and machine guns to inflict damage on enemy aircraft and troops, nations have wanted to have them. The suggestion that they actually achieve very little on their own would scarcely have stopped the stampede for larger, faster and more destructive air platforms. When nation-states had the chance to stop the rush—in 1922–23 at the Hague conference or the disarmament conference of 1932–34—they balked at the idea. Even the antiwar lobby of the 1930s thought that an international air-police force would be sufficient to ensure a permanent state of world peace, without ever thinking how this might work. Van Creveld focuses on one of the key reasons for the failure of air disarmament—the strong desire of the imperial powers to be able to use aircraft to quell the rising tide of anticolonial protest. The Royal Air Force War Manual called these colonial peoples “semi-civilised” and assumed that they would be cowed when they saw the bombing plane, symbol as it was of civilization.

Very soon came World War II, and civilized people became the target of air attacks on a scale unprecedented, before or since. Van Creveld sees this as the high point of airpower, when its claims were less spurious than throughout the rest of the century. But the real success story, he argues, comes with combined operations: the German air force powering forward with the armored fist of the army to protect its advance from enemy aircraft while destroying ground obstacles in the way; or American naval aircraft supporting the thrust across the Pacific by obliterating the Japanese air force and sinking ship after ship of the Japanese navy. Even here it is still necessary to temper the argument. Bombing an enemy tank or ship was difficult and often wasteful; building and sustaining large air forces diverted resources from possible alternatives. The best that can be said is that without airpower in World War II, it was difficult to win (though the disorganized Russian army held out against the German air force through to 1943, when the Red air force at last became a half-serious threat). This is not a wholly negative conclusion. The current fashion for “jointery” between the three armed services reflects a long learning curve in which arguments that aircraft would replace armies and navies have been swallowed back in favor of the idea that each arm supports the others.

It is nevertheless the case that from 1945 onward, airpower has been seen as the god in the machine over and over again, from the bombing of North Korea, the Rolling Thunder operation against Vietnamese Communists and the Soviet battle against the mujahideen (in which an estimated 456 aircraft were lost against a guerrilla enemy with none), to the wars in Iraq and Afghanistan, still going on today. Van Creveld is critical of all the claims made for airpower during this long half century; the sheer cost and complexity of modern aviation has reduced even the richest air forces to a few hundred fighter-bomber aircraft. And however high the lethality of these planes, they cannot be risked too much because of the replacement cost. In the end, this means they merely serve to create conditions in which ground forces have to do the real work of holding ground and fighting insurgency. Van Creveld points out that the landmark manual on counterinsurgency produced under U.S. General David Petraeus in 2006 has just five pages on the exercise of airpower, in an appendix. Even in the 1950s and 1960s, when “old-fashioned” aircraft were still in use, the major air powers were defeated, despite having overwhelming air support. From Malaya to Algeria to Vietnam, it was the insurgents who won out and the great power that had to withdraw. This is a lesson, van Creveld insists, that has never really been learned despite the many examples. This might well explain why NATO planes are being forced to crank up their activity; in almost all cases where the efficacy of airpower has not been proven, it has led to escalation. The result has usually been a lot more dead civilians.

IT MIGHT well be asked why airpower has in general not delivered on its promise. The one thing that van Creveld credits aircraft with is reconnaissance, which cannot easily be carried out any other way. This, of course, was what armed forces thought military aviation was for when they first started using it a century ago. But the combat effectiveness of aircraft has been compromised throughout its history by the development of effective countermeasures of a variety of kinds—fast fighters to intercept bombers, ground antiaircraft artillery, concealment, dispersal, ground-to-air missiles, air-to-air missiles—so that a constant seesaw results, aircraft move on a stage, antiair measures develop in tandem. The Soviet use of this weaponry (principally helicopters) in Afghanistan was undermined by mountain-based guerrillas armed with Stinger missiles (which could be operated by just one or two insurgents), or by infiltration of Soviet air bases, where aircraft could be disabled as they landed or took off. The whole point of asymmetric warfare is that the weaker side needs to find ways of restoring some kind of operational symmetry, and they usually do.

The second enemy of airpower has been technological advance. That may seem to contradict the one thing airmen always claimed for their service—that aviation was the threshold technology. But, antiair efforts have also been a major source of technical development (radar is perhaps the most critical one to recall), while the evolution of new weapons—from nuclear missiles to drones to satellites—has superseded that of simple planes. It is this fact that has rendered airpower increasingly redundant. Van Creveld speculates that the real danger to the Western world might now be a sudden “space Pearl Harbor” in which a malign but technically advanced enemy disables key satellites and brings about the financial and social collapse just avoided in the recent economic crisis. This is as tantalizing as H. G. Wells’s prophetic vision in his 1908 War in the Air that German bombers would annihilate cities in minutes and destroy the fragile crust of modern civilization. Of course, it is worth noting that much of the world’s economic and social life managed to function without PCs, mobile phones, eBay or cash machines just twenty short years ago.

Pullquote: We have only ourselves to blame for the airpower age, for its sense of urgent modernity, for its sheer excitement, for its daring defiance of the rules of engagement.Image: 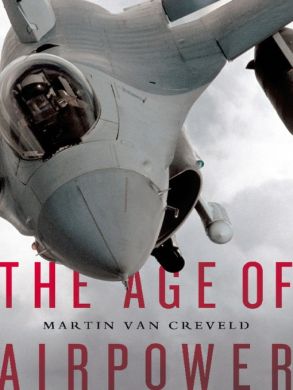