[amazon 0199782520 full]ON AUGUST 4, 1898, the German Jewish theater critic Alfred Kerr wrote a dispatch about the death of Otto von Bismarck. Ever since the impetuous young Kaiser Wilhelm II had abruptly dismissed Bismarck in March 1890—an episode famously depicted by Punch magazine as “dropping the pilot”—the aggrieved squire had immured himself at Friedrichsruh, his Pomeranian country estate near Hamburg. Now Kerr, who three decades later would flee Nazi Germany for England, expressed the sense of loss and unease pervading the German empire Bismarck had forged under Prussian leadership:

On Sunday morning you knew that he was dead. A newspaper hangs on the wall, you take it down and want to turn the first page in an unconcerned manner and read the news of his departure. A shiver and tremor possess you—even if you don’t want them to. In this second you experience, even if a sense of hatred against him was the basic impulse, how deeply you resentfully loved him. A piece of Germany has sunk into the streams of world events for all eternity. Travel safely.1

It should not be surprising that Bismarck would have evoked such conflicting emotions. From the outset of his career, he was a figure of contradictions as gargantuan as his appetite: a conservative who introduced universal suffrage; an East Elbian landholder who helped launch an industrial revolution; a diplomat who never served in the military but strode around in a yellow cuirassier uniform; an empire builder who forswore further imperial projects; a foe of socialism who introduced the social-welfare state; and a crybaby who unsentimentally destroyed the career of anyone who threatened to cross him. He ended up a grumpy old man, but it was Bismarck’s drive and magnetism, more than anything else, which allowed him—a chancellor who had no real basis of power other than his hold on King William—to reshape the destiny of Prussia and Europe.

At the start of the nineteenth century, the notion that Prussia would emerge as a great power in Europe would have seemed quite fanciful. Where France had progressively united its provinces since the Middle Ages, Germany had followed the opposite path. The House of Hohenzollern launched its first real bid for power under Frederick the Great, who helped trigger the Seven Years’ War in 1756 after snatching Silesia from Holy Roman Empress Maria Theresa over a decade earlier. But Napoléon almost put the dynasty out of business, forcing Frederick William III and Queen Louise to flee eastward. Under the 1807 Treaty of Tilsit, Prussia lost almost half of its territory. It was the War of Liberation, or the “Prussian Rising,” as it was known—a vast upsurge of patriotism that included, to the discomfiture of the Prussian armed forces, free corps—that led to the reconstitution of Prussia and Napoléon’s final defeat. Overnight, the question of a German national identity enjoyed a rebirth.

Bismarck was at the core of debates about what Prussia and Germany were supposed to epitomize. For some he personified the noble hero who, in a mere decade, created the empire that Germans had been longing for ever since the days of Frederick Barbarossa (legend has it that the sleeping kaiser lies resting in the mountains of Kyffhäuser with his knights, waiting to reunite Germany after the ravens stop flying around him). For others, such as Theodor Fontane, the novelist who chronicled Prussian society, the new empire was not an unalloyed triumph. It destroyed the ancient and valorous virtues of Preussentum: stern abstinence and self-effacement were replaced by braggadocio and preening; landowners by nouveau riche industrialists. There was good reason for apprehension. The modern parallel to the brash Wilhelm II succeeding his cautious father in 1888 would be George W. Bush and George H. W. Bush.

In retirement Bismarck achieved a public popularity that he never really enjoyed in office. Political parties began to invoke his name. Monuments were built in his honor. By the early twentieth century, his role as national icon was so entrenched that the city of Hamburg erected a colossal statue of a bareheaded Bismarck holding a sword. As the historian Thomas Nipperdey observed, the monument was supposed to function as a form of “political protest” directed “against pathos and prestige, exhibitionism and a craving for renown.” If so, the rebuke failed. Kaiser Wilhelm II plunged Germany into the abyss of World War I. And though by November 1918 the last German emperor may have fled to Holland (where he devoted himself to cultivating roses), the myth of Prussia was alive and well—ready for exploitation by the Nazis. The newly appointed chancellor Adolf Hitler met World War I hero and president Paul von Hindenburg in a public ceremony on March 21, 1933 (at the Garrison Church, where Frederick the Great was buried) that symbolized the fusion of Nazism with ancient Prussian military traditions. Two days later, the Reichstag gathered in the Kroll Opera House, surrounded by baying storm troopers, to approve the Enabling Act, legally snuffing out the Weimar Republic and vouchsafing the Austrian corporal dictatorial powers. Soon the Nazis disseminated pictures displaying the profiles of Frederick the Great, Bismarck and Hitler, suggesting an unbroken tradition between Prussia and the National Socialists. In reality, the Third Reich and the old aristocracy despised each other; Hitler simply outwitted his adversaries, using them for his own ends, then killed many of the Prussian blue bloods after they staged a failed assassination plot called Operation Valkyrie on July 20, 1944. After World War II, the cult of Prussia came to an official end. In the Communist East, it was depicted as the culprit for everything bad in German history. And in the West, the Allied Control Council declared that “the Prussian state, which from early days has been a bearer of militarism and reaction in Germany, has ceased to exist,” and officially abolished it.

But when Germany reunified in 1990, these questions of whether there was something innately perfidious in Germany’s past that prompted it to elevate the state above the citizen and predisposed it to totalitarian dictatorship once more bubbled to the surface. The old Adam of German nationalism was again descried by some overly anxious pundits and European politicians. British prime minister Margaret Thatcher, for example, summoned several leading historians to Chequers to discuss whether or not the Germans suffered from nasty, enduring national characteristics. In his memoir, Five Germanys I Have Known, Fritz Stern recounts that Thatcher was firmly stuck in the past: she saw the Germans as “dangerous by tradition and character. . . . At the end, thanking us, the prime minister clapped her hands in a schoolgirl gesture, mischievously promising us, ‘I’ll be so nice to the Germans! I’ll be so nice to the Germans!’”2

IF THE Iron Lady saw the specter of a military feudal order returning to power in a new Greater Germany intent on bullying its neighbors, she couldn’t have had it more wrong. It is one of the many merits of Jonathan Steinberg’s new biography of Bismarck that it reminds us of the immense distance that the Federal Republic has traveled from the days of the Iron Chancellor. Bismarck has been the subject of many biographies, including a sympathetic one by A. J. P. Taylor, but none has succeeded in capturing his remarkable personality and career as vividly as Steinberg’s. He has drawn on a wide range of documents and memoirs penned by Bismarck’s contemporaries, including the discerning Hildegard Freifrau Hugo von Spitzemberg, to reproduce not simply the statesman but also his milieu. Indeed, more than any other previous scholar, Steinberg pays close attention to Bismarck’s personality, concluding “it was Bismarck’s tragedy—and Germany’s—that he never learned how to be a proper Christian, had no understanding of the virtue of humility, and still less about the interaction of his sick body and sick soul.” What Bismarck did understand was provoking feuds and quarrels that led to wars that served what he perceived as Prussia’s true national interests.

Bismarck was born into the landed Junker class on April 1, 1815. The “von” was critical to his career. As Bismarck’s lifelong friend John Lothrop Motley, a Boston aristocrat who went on to become a well-known historian and ambassador to Vienna, wrote to his parents in 1833: “one can very properly divide the Germans into two classes: the Vons and the non Vons.” Not until the Nazis, who carried out what the American historian David Schoenbaum has correctly called a “social revolution,” were these class distinctions largely effaced.

Steinberg imaginatively speculates that Bismarck was able to serve William I for decades because he was a sort of surrogate son. “By an uncanny set of circumstances,” he writes:

Bismarck ended up in a kind of permanent parental triangle with his sovereigns, not just once but twice. He saw William I of Prussia as a kindly but weak man and his Queen and later Empress Augusta as an all-powerful, devious, and malevolent figure. 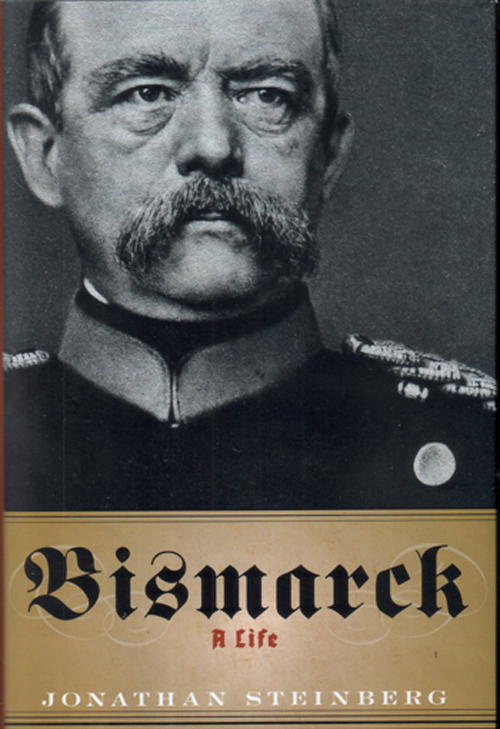