FOR MANY foreigners, the history of Afghanistan reads like a morose, Shakespearean tragedy. A litany of armies ventured into the fabled “graveyard of empires,” sometimes well-intentioned, only to face insurmountable challenges and withdraw in humiliating defeat. Without a doubt, the quintessential Afghan tragedy is the First Anglo-Afghan War, the subject of Diana Preston’s book, The Dark Defile: Britain’s Catastrophic Invasion of Afghanistan, 1838–1842.

As Kabul and growing parts of the country rose up in rebellion, the British embarked on an inglorious retreat in January 1842 led by Sir William Hay Macnaghten, Britain’s chief representative to Kabul, and Major General William Elphinstone, commander of the British Army in Afghanistan. The British-led force, which numbered about 4,500 soldiers and included a large contingent of Indian sepoys, was eviscerated as it battled through biting cold, knee-deep snow and apoplectic tribesmen. Dr. William Brydon, the lone European survivor to reach the British fort at Jalalabad, later recalled: “This was a terrible march, the fire of the enemy incessant, and numbers of officers and men, not knowing where they were going from snow-blindness, were cut up.”

The Dark Defile, whose title comes from the lines of a Rudyard Kipling poem, is an impressive book, and Preston relies on primary sources to tell an intriguing story from the British perspective. It is not as comprehensive as the classics by such historians as John William Kaye, whose History of the War in Afghanistan remains a paradigmatic account of the British experience, but it is well sourced and well written.

Given the current war in Afghanistan, it is natural to inquire about the applicability to today of Britain’s nineteenth-century experience. But its relevance is limited. Not every empire that ventured into those lands experienced the same dire fate as the British did in the nineteenth century. Still, two lessons bear close attention. The first is a virtual tenet among most Afghan anthropologists: a strategy that focuses only on creating a strong central government is unlikely to succeed in a country where power remains local. The second is perhaps more sobering: contrary to modern counterinsurgency theories, victory—and defeat—may ultimately be more a function of winning the hearts and minds of domestic constituents than of local Afghans. Both lessons become vividly apparent in The Dark Defile.

PRESTON TELLS the British tragedy in colorful prose. In the early nineteenth century, Britain was a global superpower that boasted impressive political, military and economic might. It was, to be sure, the era of Pax Britannica. The country’s gross national product was $8.2 billion, and it boasted a 53 percent relative share of European wealth, had the largest iron and steel production in the world, and enjoyed a 10 percent share of world-manufacturing output. The only countries that came close were Russia and France, which had large populations and similar levels of gross national product, world-manufacturing output and industrial potential.

In South Asia, the British Empire was firmly entrenched in India, where the East India Company had flexed its economic and military muscles to annex or subdue much of the subcontinent. Britain’s chief rival in the region was Russia, and the two engaged in a growing balance-of-power struggle. The “Great Game” was alive and well. As Preston writes, “the British perceived the Russians as the greatest threat to India,” either directly or by inciting others to act against British interests. Reacting to reports from British spies and diplomats across the region, including the indefatigable Alexander Burnes, the British had become increasingly edgy about Russian expansionism. Burnes’s reports emphasized that Afghanistan could be a profitable trade route and help balance Russian power.

In May 1838, senior British government officials debated several options. Lord Auckland, the governor-general of India, wrote to Sir John Hobhouse, president of the Board of Control in London, that one option was to “leave Afghanistan to its fate” and focus on shoring up British India. A second was to “attempt to save Afghanistan” by supporting the current ruler in Kabul, Dost Mohammed Khan, and other local power brokers. The third option—and the one Britain eventually adopted—was to invade the country and impose the elderly Shah Shuja as king, who the British assessed was more malleable than Dost Mohammed Khan. For British officials, Shah Shuja’s weakness was an asset.

It turned out to be an extraordinary gamble. One Afghan leader pointedly told the British that they “could never win over the Afghan nation” with Shah Shuja, who did not enjoy the legitimacy and popularity of Dost Mohammed Khan. This reality was reinforced on August 7, 1839, when the city of Kabul gave a lukewarm reception to Shah Shuja during his initial entrance into the city. An Indian army infantryman named Sita Ram poignantly captured the irony: “The truth began to dawn on us that despite all the assurances Shah Shuja had given us in Hindustan that the Afghans were longing for his return, in reality they did not want him as their ruler.”

The British had broken a major tenet of modern-day counterinsurgency theory: they failed to win the support of the local population. This miscalculation led to the installation of a weak and unpopular leader. Even worse, the British had made a dangerously naive assumption. They believed Shah Shuja would shortly firm up control of the country, allowing the British to withdraw most of their forces.

It was only a matter of time before Afghanistan exploded. In 1840, Pashtun tribes began to rebel in the southern, eastern and central parts of the country. By 1841, the unrest reached Kabul as the inhabitants rose up against their European occupiers. As Macnaghten wrote, “The whole country . . . had risen in rebellion; our communications on all sides were cut off.” British forces and civilians were pinned down in several cantonments. Perceiving the gravity of the situation, Macnaghten and Elphinstone cut a deal with the insurgent leader, Mohammad Akbar Khan, and agreed to leave.

Their timing couldn’t have been worse. It was January, and Kabul was suffering from subzero temperatures. On January 6, 1842, the British retreated with a contingent of 4,500 soldiers (of whom 690 were European) and twelve thousand camp followers that included women and children. Some died from the extreme cold. But most died an ignominious death at the hands of Afghan tribesmen, who picked apart the force from behind rocks, on horses, and through daring ambushes and raids. Those who were too weak to continue were cut to pieces by waiting tribesmen.

Vincent Eyre, who was captured during the retreat and later went on to serve as an English general in the Indian army, described the scenes in lurid detail:

The snow was absolutely dyed with streaks and patches of blood for whole miles, and at every step we encountered the mangled bodies of British and Hindustani soldiers and helpless camp-followers, lying side by side . . . the red stream of life still trickling from many a gaping wound inflicted by the merciless Afghan knife.

Upon reaching the British fort at Jalalabad, Brydon was in a wretched condition. Exhausted from the fighting and the extreme cold, his body was a mass of cuts and abrasions, and his feet were so swollen with frostbite that he could barely stand.

The British responded with a mixture of shock and rage. Macnaghten and Elphinstone, both of whom died during the retreat, were vilified for their strategic and tactical blunders. Still, the British had to exact justice. Later that year, they sent a raiding party to Afghanistan that reached Kabul in late September 1842 and caused widespread destruction. But it was a pyrrhic victory. Dost Mohammed Khan returned to his throne in 1843 and remained the Afghan leader until his death in 1863.

ONE MIGHT be tempted to overstate lessons from the First Anglo-Afghan War. Preston sometimes does. She suggests, for example, that the British exaggerated the threat Afghanistan posed to their national security—much like today. While this assessment may be accurate in the British case, it is not for the current war. In the 1830s, Afghanistan did not pose a direct threat to the British homeland, but British policy makers were nonetheless concerned about a domino effect if Afghanistan fell into Russian hands—not unlike American fears about Vietnam in the 1960s and 1970s.

Today, events taking place in Afghanistan and Pakistan, especially near the two countries’ border, do pose a serious threat to the territories of the United States and its Western allies. Consider the following list of major terrorist attacks that have been planned or carried out since September 11. In July 2005, al-Qaeda struck ferociously in London, detonating a series of bombs that killed fifty-six people and injured more than seven hundred. In August 2006, another group of radicalized British Pakistanis plotted to blow up transatlantic flights from London to the United States and Canada with the assistance of al-Qaeda leaders in Pakistan near the Afghan border. 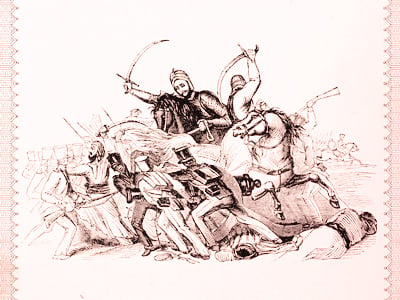