My Kingdom for a Nose

CLEOPATRA VII—“the Female Horus,” “the Great One,” “the Mistress of Perfection,” “the New Isis,” “Father-Loving Goddess” (to give her at least some of her proper titles)—was Egypt’s queen. Cleopatra was not, however, an Egyptian, and she had no direct historical association with the Egypt of the pharaohs. In fact, she lived far closer in time to us than she did to the builders of the great pyramids. She was Greek, the last—as it turned out—of a line of monarchs descended from one of Alexander the Great’s most trusted generals, Ptolemy I, who after Alexander’s death moved to Babylon, invaded Egypt and appointed himself pharaoh in 305 BCE. The Ptolemies venerated Egyptian gods (many of whom, however, also existed in Greek mythology) and performed the religious rituals of the pharaohs who came before them. They also assumed pharaonic titles. But Cleopatra was the first of her dynasty to be able to speak Egyptian (and if Plutarch, the Greco-Roman biographer whose Life of Antony is almost the only source we have for the story of the two lovers, is to be believed, Mede, Ethiopian, Hebrew, Arabic, Parthian and “Troglodyte”—the language of the peoples of southern Egypt and northern Sudan—were part of her vast lexicon as well).

Still, as Adrian Goldsworthy tartly remarks in his latest offering on the fate of the Roman Empire, Cleopatra was “no more Egyptian culturally or ethnically than most residents of modern-day Arizona are Apaches.” But this is a woman who made her tantalizing way through Caesar and then Antony—all for the sake of a little female ambition to preserve her Egyptian empire. In the span of the eighteen years in which she consumed these lovers, she may well have turned herself into the source of Rome’s collapse centuries later.

IT ALL started with Caesar’s arrival in Alexandria sometime in 48 BCE in search of financial support—and with an eye toward putting an end to the struggle for succession between Cleopatra and her brother Ptolemy XIII (to Caesar’s advantage one way or another). Cleopatra, so legend and Plutarch have it, was smuggled into Caesar’s palace in Alexandria wrapped in a carpet. The story is probably apocryphal and the carpet more likely to have been a laundry bag. But no matter how she succeeded in gaining access to Caesar, she seems to have immediately persuaded him both to become her lover (Goldsworthy speculates, on what evidence he does not say, that “it is more than likely that Cleopatra was a virgin” at the time) and—which may have required rather more effort—to support her cause. Within the year, Ptolemy had been drowned in the Nile, his army had been destroyed and Cleopatra had been confirmed as queen.

For months after her triumph, she dallied with Caesar very much as she would later dally with Antony. The now-weary fifty-two-year-old, who had been campaigning almost without interruption for a decade, could finally relax, explains Goldsworthy in a rare moment of romantic whimsy, in “the company of his clever, exciting and beautiful young lover, helping him to forget his age and his cares.”

Caesar, however, was more determined politically, less forgetful of his cares and perhaps less entranced than Antony was to be. In any case, in 47 BCE he left Egypt never to return. Later that year, Cleopatra gave birth to a son whom she called Ptolemy but whom the Alexandrians referred to as Caesarion, “Little Caesar.” Behind these rococo sexual maneuvers, Goldsworthy speculates that “passion seems certain and genuine love most likely developed.” What emerges most clearly, however, is what Goldsworthy is best at describing, not passion and love—with which he gives the impression of feeling slightly uncomfortable—but Cleopatra’s overarching ambition to hold on to power as the ruler of a prosperous and politically acquiescent Egypt at whatever cost. She may indeed have developed “genuine love” for Caesar and Antony, but both were vital to her political survival. And with the passing of one came the adoption of the other.

In the wake of the civil wars which erupted after Julius Caesar’s assassination on March 15—the Ides of March—44 BCE, Mark Antony, Octavian and M. Aemilius Lepidus were appointed the three “triumvirs” by the Roman Senate to restore order (the Second Triumvirate). Lepidus, the governor of Spain and parts of Gaul, was soon forced into exile by Caesar’s nephew and designated heir, Octavian, who took charge of Rome itself and most of the empire in Europe. Antony (Caesar’s second in command until his death) was given the east; and the richest, most important part of the east was that Ptolemaic kingdom of Egypt. Antony was quickly and summarily entranced by Cleopatra and her lands.

The seventeenth-century French philosopher Blaise Pascal (inventor of the syringe and a forerunner to the digital computer) once famously remarked: “the face of the earth would have been different if Cleopatra’s nose had been a little shorter.” Perhaps then Mark Antony, consul of the Roman Republic, might not have spent so much time with her in Alexandria, dallying in gilded barges on the Nile, hunting and fishing, feasting off golden and bejeweled tableware amid clouds of rose petals. If Cleopatra had been less captivating, for whatever reason, Mark Antony would have had more time to attend to affairs of state in Rome. Had he done that he might have prevented Octavian (later to become the emperor Augustus) from undermining his political standing at home by depicting him as plotting not only to rule the republic jointly with a foreign queen who worshipped cattle and strange animal-headed gods but also to move its capital to Alexandria. Perhaps then the republic would have been saved from Octavian, his imperial ambitions and the military state that would eventually lead to Rome’s destruction.

IN BOTH the popular and contemporary Roman imagination, something unmistakably “oriental” clung, and still clings, to Cleopatra’s image. Her Roman detractors used it against her, accusing her and Antony of allowing, in the words of the philosopher Seneca, “foreign customs to reach into the empire, and vices of which the Romans knew nothing.” And every movie version has her dressed in fanciful, ancient Egyptian costumes as if she were the granddaughter of Nefertiti. She was twenty-eight when Antony fell under her spell—the age, in Plutarch’s view, when “a woman’s beauty is at its most superb, and her mind at its most mature.”

The question of Cleopatra’s beauty (although less often her mind) has been a source of fascinated and frequently titillating debate ever since. (There is even a web site called “Was Cleopatra Beautiful?”) Goldsworthy himself considers the evidence, with perhaps too much solemnity, and comes to the conclusion, as have so many others, that she could have been either fair or dark, tall or short, blond or brunette, slim or plump (Goldsworthy favors plumpness, “especially in her teenage years”). The trouble with all the evidence is that none of it is contemporary, and some of it dates from over a century after Cleopatra’s death. If the only authenticated representations we have are anything to go by, her famous nose was slightly too long and slightly too hooked. Certainly Goldsworthy is right in saying that she “was not another Helen of Troy, a mythical figure about whom the most important thing was her beauty. She was no mere passive object of desire, but a very active political player in her own kingdom and beyond.”

In all probability it was not so much her looks which enthralled Antony as her intelligence. Her conversation, according to Plutarch, was “irresistibly engaging”; she was highly educated, as were all aristocratic Greek and Roman women of the period, and she had the advantage of being the mistress of a wealthy and lavish court. Whatever gifts of body and mind Cleopatra possessed, she employed them on her lover to devastating effect. “Plato,” observed Plutarch dryly, “speaks of four kinds of flattery, but Cleopatra knew a thousand.” And it was from this heightened level of thrall that Antony lost himself an empire.

AFTER THE Second Triumvirate came to an end in 33 BCE, Octavian and Antony were no longer forced to rule Rome together; disagreements between the two men quickly led to an all-out civil war for control of the republic. War was declared against Cleopatra, and by extension Antony, a year later.

Antony might have been able to defeat Octavian at the famous Battle of Actium on September 2, 31 BCE, that pitted the soon-to-be emperor’s men against those of Antony and Cleopatra had it not been for Antony’s all-too-toxic love of his Egyptian goddess. Antony’s forces were substantially larger than Octavian’s, and sheer size counted for a great deal in the ancient world. Actium was fought partly on land and partly at sea, and Antony had twice as many ships as Octavian, and they were heavier, larger and better armed. Astern of his own fleet, there were sixty more ships provided and directed by Cleopatra herself. They would prove to be his undoing.

Pullquote: One thing the intertwined stories of Antony and Cleopatra, and of Caesar and Cleopatra, may be able to tell us about is the long-term danger inherent in excessive executive power.Image: 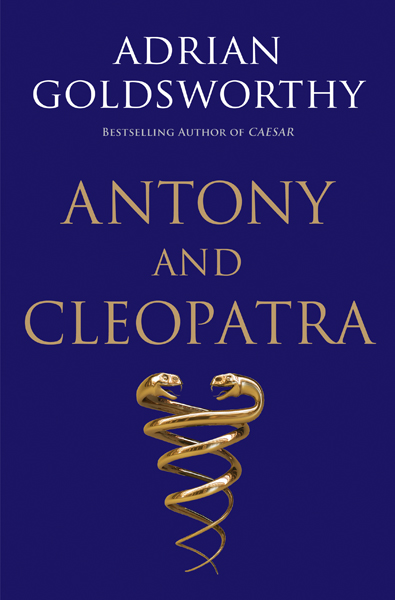