Learning the Lessons of Afghanistan Little America should be required reading for all military personnel sent overseas, replacing the fake Three Cups of Tea, which was warmly embraced by naive generals who bet on nation building under the guise of the COIN (counterinsurgency) strategy. The book is a detailed report of our failed policies in Afghanistan by Rajiv Chandrasekaran, a leading Washington Post reporter. It uses an early episode in U.S.-Afghan relations as a revealing and emblematic tale of why the United States suffers from a severe case of what I previously called Multiple Realism Deficiency Disorder (MRDD). As I read Chandrasekaran, he finds that our feedback loops are extremely weak. We not only make one mistake after another, but we also do not have the mechanisms to learn from them and hence doom ourselves to repeat them.

In the 1950s, an American engineering company began work in Afghanistan to establish a series of villages that would benefit from modern irrigation techniques. The development relied on the construction of modern dams and sought to transform the Helmand province and, by extension, all of Afghanistan. When this project ran into numerous difficulties, the corporation in charge, Morrison-Knudsen, asked for more appropriations, which it soon received. When the surge in funds did no good, still more funds were sought and dispensed. When the project continued to flounder, Washington finally decided to send out an assessment team and chose Tudor Company for that task. The team reported that all was well. It was left to Chandrasekaran to point out that Tudor was a subsidiary of Morrison-Knudsen.

The rest of Little America is full of other examples that show why our mechanisms for learning from our mistakes function so poorly and why our reality testing is so deficient. We rely on metrics. Chandrasekaran describes weekly meetings in which a general sits in his headquarters and officers from various fronts take turns, each with his laptop at hand, to report numbers. This many Taliban were killed, that many dollars were handed out to locals, that much ammunition was expended and so on. Together, they do not provide a realistic picture of what is going on. We either must use different measurements or leaven them with more qualitative and comprehensive assessments of the conditions in the field—the kind that independent and experienced reporters provide.

In Afghanistan, generals, visiting senators and civil servants rarely leave their headquarters, many rarely wander out of Kabul or within it—they tend to stay in the fortified areas akin to the green zone in Baghdad. Those who do venture out travel with so many security personnel and entourage members that they can rarely see the world outside of their bubble. Anybody who does not spend at least two days with grunts, in the same conditions under which they live and fight, should not claim to know what is going on and should be disqualified from reporting to higher ups and the public what he or she learned.

The military and USAID need more social scientists. Any sociology graduate student worth his salt would have told “Chemical Bill,” as U.S. ambassador Wood was nicknamed, that just because spraying poppy fields worked in Colombia does not mean spraying will have the same effects in Afghanistan. And even though COIN worked in Malaya, it does not follow that it will work in a country that has an open border with Pakistan and provides a safe haven and supply routes for insurgents (among other major differences).

Ideology also prevents reality testing. Those Afghan farmers who were willing to grow cotton instead of poppies asked for free seed and credit until the harvest, both of which were provided to them by the Taliban and drug lords if they grew poppies. USAID (under George W. Bush) opposed such government subsidies. They may have had good reason. Indeed, at times, reports of Afghanistan read as if the main thing we taught its people is that writing grant applications to get funds from Uncle Sam is the best line of business. Still, if we are to compel the farmers to change crops, at least initially, we must face the reality of their circumstances and not get waylaid by our free-market ideals.

The book makes for painful reading, as each of our mistakes and inability to learn from them costs numerous lives. But perhaps most distressing is the political rejection of reality testing. Time and again the book shows that when those lower in rank filed reports that the COIN strategy was not working, they were rebuffed or their reports were ignored by those higher in rank. These reports were almost never shared with Washington. When such reports did somehow make their way to the capital, they were dismissed. Both the military and the State Department need stronger mechanisms than the inspector general and the Government Accounting Office to serve as early critics of theories that become doctrines and then gain a life of their own.

As we are winding down in Afghanistan and extracting ourselves from Iraq, it is as good a time as any for the White House to appoint an investigative team not beholden to any of the agencies to explore why our learning is so poor and the feedback loops are so weak. Lots of lives, and ultimately our security, depend on us learning to overcome our MRDD. Such a team could hardly find a better starting point than Little America. 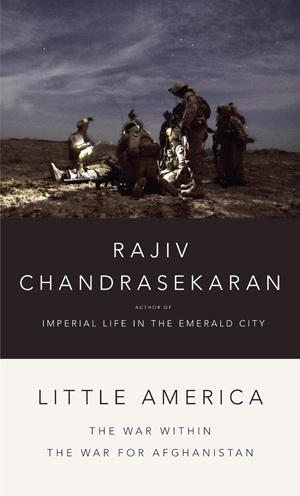