Lifting the Veil on North Korea

NORTH KOREA is routinely described as unknowable—“the most opaque country in the world,” according to William Keylor, a professor of international relations at Boston University. Not so for Andrei Lankov, whose new book, The Real North Korea, arrives just in time to inform our ignorance. Lankov, a history professor at Kookmin University in Seoul, South Korea, offers a highly readable book and a unique perspective that yields a knowledgeable, sardonic, acerbic and not entirely dispassionate view of North Korea. (In the interest of disclosure, I blurbed the book.) Lankov grew up in Leningrad’s last days, before it emerged again as St. Petersburg; thus, a fortiori, he lived through the collapse of the Soviet Union. (As a young exchange student in Pyongyang in the 1980s, he became fluent in Korean. While this might seem to be a commonplace requirement, most of the American experts and pundits parading in our media do not know the language, and Kathleen Stephens, who served from 2008 to 2011 as the U.S. ambassador to Seoul, was the first and so far only ambassador there who was fluent in Korean.) Lankov therefore casts a knowing gaze on a country bending toward the same fate, in his opinion, as the Soviet regime he grew up in. But, as he avers, North Korea remains insistent on staving off this rendezvous with history.

We get fresh air on the very first page: “North Korea is not irrational, and nothing shows this better than its continuing survival against all odds.” The North’s alleged “irrational and erratic” behavior is carefully calibrated; its leaders “know perfectly well what they are doing.” Lankov even calls them “perhaps the best practitioners of Machiavellian politics that can be found in the modern world.” That might take things a jot too far. Joseph Stalin was of this same modern world, as were Cesar Chavez, Richard Nixon and Machiavelli’s irrepressible countryman, Silvio Berlusconi (whose unflagging buffoonery rivals Kim Jong-un’s). But Lankov’s point is well taken: the North emits bluster, brinkmanship and, from time to time, measured violence, but its leaders “have known where to stop.”

The author also dishes up a rare treat, mostly unfound in books of this genre: common sense and humility about the North’s future, a theme from beginning to end. Those looking for “silver bullets or magic potions” to solve the North Korean problem will not find them. And those who hope for the quick demise of “the plum and jolly looking young new Kim” might also reckon with his youth: if he lives to eighty-two as his grandfather, Kim Il-sung, did, he will still be around in 2065 (or 2066; experts assume he was born in 1983 but, alas, they don’t really know). Instead of clear-cut policy recommendations, by the end of the book Lankov offers up a number of melancholy and unsettling scenarios for the future—suggestions we will come to in due course.

Lankov is very good on the ubiquitous, top-to-bottom surveillance state created in the Democratic People’s Republic of Korea (DPRK); he calls it the world’s “closest approximation to an Orwellian nightmare.” Neighbors watch neighbors; innkeepers report every guest to the police; travel permits are required to move any distance within the country; and exit from the country is of course entirely prohibited without state permission. Lankov is a bit taken aback at the draconian reach of this system, noting that in Stalin’s time Soviet citizens could travel freely between city and countryside, even if changing domiciles required permission. A droll and mordant humor colors this section of the book, as Lankov, a former Soviet citizen, dwells on the ubiquitous neighborhood inminban (people’s group or unit) and tacitly imagines himself living under such heavy restrictions. But he does not tell the reader that these local organizations were, in the first instance, agencies of Japanese wartime control, that similar organizations and practices persisted in South Korea into the 1980s, that the North’s widespread norm of everyone surveilling everyone else was in place by 1946, and that a similar system emerged in China.

The author’s opprobrium also descends on the way in which family background exercises a lasting effect on individual life chances in the North, with everyone categorized into one slot or another, and the families of police or military officers who served the Japanese bringing up the rear. Thus, the entire society is organized around the citizens’ songbun, or family status, or at least this was the case until the late 1990s, when Kim Jong-il relaxed the practice. Lankov characterizes this as a caste-like system, but he does not remark on the caste-like system that marked premodern Korea. For half a millennium there, a few hundred aristocratic families monopolized not just the land and wealth but also the civil-service exams, which offered scant upward mobility. This is in contrast to neighboring China, where similar exams fostered at least a limited extent of upward mobility. Nor does he let the reader know that in South Korea, tens of thousands of families (and thus millions of South Koreans) were blacklisted because they were deemed to be from leftist, pro-North or antiregime families. That changed only after the militarists were overthrown in the late 1980s. Of course, the DPRK’s system is much worse and ongoing—and much less susceptible to resistance and dissent than was the South’s dictatorship. Lankov reports a chilling detail that I was unaware of: the confiscation and destruction of privately held foreign books in the late 1960s, most of them being Japanese and . . . Soviet.

This atrocity coincided with the full emergence of the two Kims and their nativist ideology. They ruled over a Communist country where even Pravda and China’s People’s Daily were unavailable. Back in the 1970s, I got a small grant from the New York–based Social Science Research Council to study the DPRK’s social sciences. It took only a few days in the Library of Congress to realize that there were none; the newly created Social Sciences Institute did put out a journal, but it was nothing but a mouthpiece for limitless mastication on “the great Juche idea,” the political thesis put forth by Kim Il-sung as the foundational philosophy of his regime. Soon nearly every trace of Marxism-Leninism (not to mention Stalinism) was subordinated to the reigning regime maxim that Kim Il-sung originated the DPRK and just about everything else—in Lankov’s words, he became “the greatest human being to ever live.”

Lankov rightly notes that open state terror is not so important in the North because so much preventive work has already been done, beginning with the two male faces first seen by the country’s babies: Kim Il-sung and Kim Jong-il. This may be why the author does not dwell much on the prison camps that get so much foreign attention. Perhaps he sees the country itself as one big prison. But he also probes unexpected anomalies—for instance, when high officials are sent off to the camps with their families and then reemerge years or decades later in high positions. He briefly discusses the most famous product of these camps, Kang Chol-hwan, whose book The Aquariums of Pyongyang brought him much attention and an Oval Office visit with George W. Bush. But Lankov doesn’t mention that this same person somehow got into the most prestigious school in the country (Kim Il-sung University, of course), after spending ten years of his youth in the camp.

THE BOOK’S most affecting pages reveal a paradox that foreigners sense almost immediately but really have no way of explaining: “I could not help but find it remarkable,” Lankov writes of his years as a student in Pyongyang, “how ‘normal’ the daily lives usually were.” People were neither “brainwashed automatons” nor “docile slaves,” but fully realized human beings who were, as often as not, warm and good-hearted people. Their concerns were similar to those of the rest of us: falling in love, family, children’s educations, job promotions. “They enjoyed romance, good food, and good books, and didn’t mind a glass of liquor.” They also cared about health care, infant mortality and life expectancy. Mostly free national systems provided basic human services, which until the famine years put North Korea in the ranks of developed nations (life expectancy was seventy-two before the famine of the 1990s; now it is sixty-nine). Even today, child mortality is “remarkably lower than in many developing countries of a comparative economic level,” Lankov writes. Schoolchildren’s skills in basic literacy and numeracy are also at comparatively advanced levels. Moreover, in the past decade GDP growth has averaged 1.4 percent a year (not robust but steady), and even a shimmer of affluence is now noticeable in the capital.

Lankov asserts that the DPRK may be “one of the most idiosyncratic places in the entire world,” but unfortunately he doesn’t seem to appreciate fully the various idiosyncrasies of the regime, and he doesn’t spell them out with any completeness. Thus, he relegates the reigning ideology of this regime, the ever-trumpeted “Juche Idea,” to one sentence, saying that the best translation is not self-reliance, but “self-importance” or “self-significance.” In fact, this ideology bears traces of native neo-Confucian doctrine, particularly in its rejection of materialism in favor of a metaphysical idealism (it is more Hegelian than Marxist). As Cornell University scholar Victor Koschmann has shown, the discourse of “subjectivity” (shutaisei in Japanese, chuch’esong in Korean) has been a dominant concern of Japanese intellectuals throughout the postwar period as they have sought to understand how their country might be (or remain) modern and still reflect a unique Japanese essence. As to the words that do translate as self-reliance (charyok kaengsaeng), Lankov dismisses that ideology as a pale knockoff of Maoist doctrine; in fact, the Japanese deployed this term during the militarist period of the 1930s, when American embargoes forced them to fend for themselves. Its literal translation is “regeneration through one’s own efforts,” and I have seen it mostly in the Korean countryside, not in Pyongyang. But the nuance is the same: fend for yourselves, and don’t expect investment from the center. 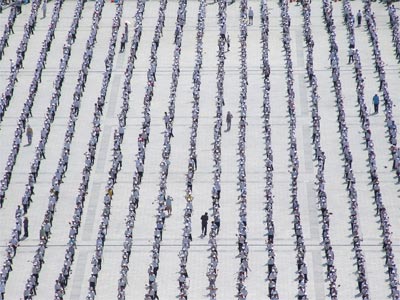